Eurozone countries are falling like dominos. But bailouts—funded by taxpayers in other countries—keep banks from collapsing, governments from defaulting, and investors from incurring well-deserved losses. Bailout money that no one has. And so it’s borrowed. Borrowing is pain free, and easier than collecting taxes. Until it’s impossible. Hence a debt crisis.

In the US, we talk about “revenues” instead of taxes. President Obama’s budget is circulating, and it has that word in it, causing heart palpitations and conniptions left and right. But how do countries stack up against each other when it comes to taxes?

In the graph below, the 34 countries of the OECD are ranked by the amount of taxes they collected from all sources in 2010—income, consumptions, assets, etc., at local and national levels—as a percent of GDP.

Denmark, perched precariously at the top of the list, extracts nearly half of its GDP in taxes, followed by Sweden, followed by 10 of the 17 Eurozone countries—plus Hungary. We used to live in Belgium and can confirm that much of what you earn is taken. While it may be a tax haven of sorts for rich foreigners with unique tax problems who get taxed to death in their own countries, Belgium is a tough place for people who make and spend their money there!

And there are disparities: France confiscates 42.9% of its GDP in taxes—and that was before a slew of tax increases were passed in 2012. Germany takes 36.1%. Yet, France’s deficit is ballooning while Germany had a nearly balanced budget in 2012.

The bailed-out debt-crisis countries are all in the lower tax-extraction category: Spain (32.3%), Portugal (31.7%), and Greece (30.9%)—Greeks at all levels, particularly independent professionals such as doctors and lawyers, and of course the elite, have figured out how to avoid paying taxes. Then there’s Ireland (27.6%). Bailed-out Cyprus isn’t on the list because it isn’t a member of the OECD; in 1995, its application was vetoed by Turkey. However, in 2010, Cyprus was the second richest country in the Eurozone! With its 10% corporate income tax and other tax advantages, it would have one of the lower tax burdens.

The graph shows the ranking of the 34 OECD countries (data from the OECD via the Center for Tax Justice). And who is near the very bottom? 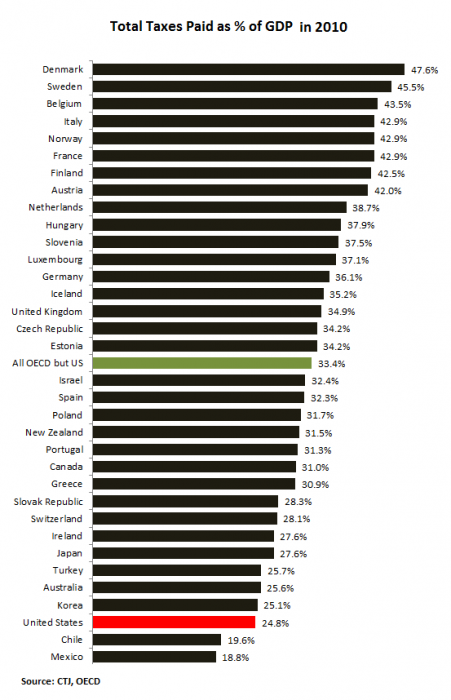 The biggest fiscal basket case of them all, the real one, the one that is blowing up in slow motion right now, Japan, whose gross national debt will exceed 240% of GDP by the end of this fiscal year, has given its people and companies a free ride for years. All manner of huge subsidies and handouts for Japan Inc. on top of a welfare state par excellence for the people add up to a majestic tab. The way they’ve paid for much of the tab, given the relatively light tax burden of 27.6%: borrowed and printed money.

Near the very bottom of the list, in third place, is the US (includes federal, state, and local taxes). Among OECD countries, only Mexico and Chile have a smaller tax burden. Over the last thirty years, taxes in the US have ranged from a high of 29.5% of GDP in 2000 (capital gains!) to a low of 24.2% in 2009. The noble rank of 32 out of 34 was first achieved in 2009, after a long uneven progression from 16 out of the then 24 OECD countries in 1979. If Congress could just hold spending down to that level! But that’s the hard part. Cutting taxes, any idiot can do that.