The report noted that “the standard of living has been sliding or stagnating for practically all categories of the population except the wealthiest.” Overall, it dropped 0.5% in constant euros in 2010. But for the lower 30%, it dropped between 1.3% and 1.6%, while it increased 1.3% for the top 5%. “Most of the indicators show a progression of inequalities,” the report underlines dryly.

Blame the current unemployment fiasco? Nope, the report says. In 2010, unemployment had been improving as the economy recovered from the financial crisis. Future poverty reports—those for 2011 and 2012—will reflect the pernicious effects of the rise in unemployment that started in mid-2011. And there is no letup in sight.

On Monday, the government reported that the number of temporary workers—an indicator of changes in demand for labor—had plunged 3.5% in October and is now down 13.9% from prior year. A collapse that nearly mirrors the debacle of the financial crisis. But this time around, it started falling from a much lower point than it did in 2008. 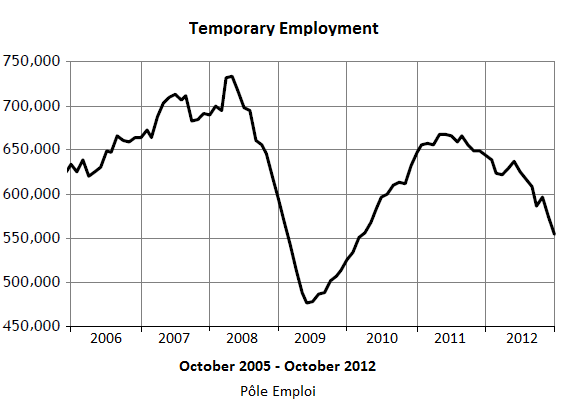 The disappearance of jobs, as France skids deeper into its economic crisis, is already putting its mark on poverty: 48% of the people consider themselves either living in poverty or on the way to living in it.

The survey set the tone for the National Conference of the Fight against Poverty and Exclusion this Monday and Tuesday. In a sign that the government was taking poverty seriously, President François Hollande himself would kick it off. Prime Minister Jean-Marc Ayrault would close it. It would be packed with ministers, representatives of anti-poverty associations, and even people who live in poverty. All under the motto, “Imagine the social policies of the 21st century.”

But the government’s display of its Socialist heart is already stalling. Hollande had a scheduling conflict. Instead of getting tangled up in a dicey effort that would call for programs the government wouldn’t have the money to pay for, he decided to hobnob, and hold hands, with German Chancellor Angela Merkel in Oslo, Norway, during the Nobel Peace Prize ceremony. It didn’t go unnoticed.

And the tip of the spear of the Socialist left wing, Industry Minister Arnaud Montebourg?

In October he’d pleaded flamboyantly that the “made in France” be given preference and that a dose of protectionism be instituted at the European level to stem France’s deindustrialization and protect its car makers from Korean imports. Then he’d stirred up a raucous debate with his threat to nationalize ArcelorMittal’s old steel plant at Florange.

That tip of the spear? Broken off! While in Brussels on Monday to beg the free traders in the EU to impose his industrial vision on the land, he was asked about the ArcelorMittal plant—Ayrault having swept his threat off the table. “I let Prime Minister Ayrault sort things out at Florange,” he said, “That’s his job now.”

Montebourg has been shunted aside. After he got the cold shoulder from the same free traders who’d shot down his plea for protection against Korean imports, he mused, “For 30 years, consumers made the law in Europe, and the result is a disaster. As for me, I defend the producers.” He claimed that the EU was the only entity that didn’t “defend itself against unfair competition”—purposefully forgetting that the EU has a trade surplus with the rest of the world, though France has a trade deficit.

“We’ve become the idiots of the global village,” he added. But hardly anyone was listening to the Socialist firebrand. He has become irrelevant in an unpopular government that is desperately trying to swing the other way.