In France, 48% of the people considered themselves either living in poverty or on the way to living in poverty. The sobering results of a survey released just ahead of the National Conference of the Fight against Poverty. It’s going to be a big conference—a sign the government is taking poverty seriously. Prime Minister Jean-Marc Ayrault had announced it in September under the motto, “Imagine the social policies of the 21st century.”

It will take place in Paris on December 10 and 11 at the Iena Palace, home of the Economic and Social Council, which advises the National Assembly and the Senate on social and economic policies. President François Hollande himself will kick it off. Ayrault will close it. Sandwiched between them will be ministers, representatives of anti-poverty associations, and even people who live in poverty. The goal: a roadmap for social questions in Hollande’s five-year term.

It was one of his campaign promises. “The first time that the poverty has become a political topic that a President seizes,” said Bruno Grouès, coordinator of Alerte, an umbrella organization of 35 anti-poverty associations.

The largest consumer companies are already reacting to “the logic of pauperization,” as L’Oréal CEO Jean-Paul Agon had called it. Unilever, the third largest consumer products company in the world, was adjusting its commercial strategy by redeploying to Europe what had worked in poor countries of the developing world. E.Leclerc, the number one retailer in France, confirmed that poverty is a new commercial reality.

In France, poverty is linked to the private sector that is atrophying and shedding jobs. Unemployment numbers have been like Chinese water torture, rising relentlessly since mid-2011 to reach 10.3%—the worst since 1999. Youth unemployment hit 24.9%, the highest since the data series began in 1996. And there is no letup in sight.

The jobs fiasco goes beyond the debt crisis. Unemployment peaked at 11.2% in 1997. The emasculated private sector simply couldn’t participate in the craziness and benefits of the dotcom bubble that was in full swing in the US. After 14 years of Socialist governance—from 1981 to 1995—and nationalization of many of the largest companies, the private sector had lost its oomph. But after a wave of partial privatizations, jobs recovered. Unemployment dropped to 7.5% in the second quarter of 2008, even as the US was sinking into the financial crisis.

President Nicolas Sarkozy gloated on TV: France was immune to the American crisis, he said; under his leadership, it had its act together. By late 2009, unemployment was at 10%. The subsequent jobs recovery was as feeble as it was short, ending in mid-2011 at 9.5%. Unbeknownst to Sarkozy, that was as good as it would get: 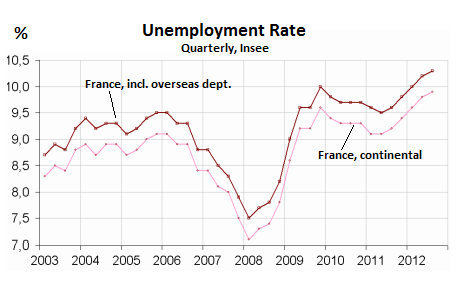 The debt crisis was hitting France. Uncertainty took over. The private sector pulled back, and unemployment stormed higher, right in front of Sarkozy’s incredulous eyes. When Hollande took over, unemployment had been getting worse for a year!

It has left its mark on poverty in France, as the dreary CSA survey shows: 37% of the French consider themselves on the way to living in poverty; 11% consider themselves already in it. Only 51% weren’t affected by it. Surprisingly, of the professional categories, “employees” were the hardest hit, with 12% living in poverty and a stunning 48% on the way. A total of 60%! Only 38% considered themselves beyond poverty’s reach.

Jérôme Sainte-Marie, director of the political opinion department at the market research firm CSA, which had conducted the survey, worried that France has “entered a new era.” This was now no longer a question of “lowered status,” he lamented, “but of pauperization.” Many French people not only had the impression of being “worse off than their parents or worse off than hoped,” but they worried “that they could be thrown into misery, if they aren’t already in it.”

The conference and the surrounding fanfare will produce some heartfelt speeches, a few soothing Band-Aids, and perhaps even a laudable roadmap. But it remains doubtful that these measures can, or even attempt to, address the wheezing private sector whose job-creation machine has been demolished. But only a thriving private sector could reverse the jobs fiasco and stem the rising “pauperization.”

8 comments for “The Alarming “Sense Of Pauperization” in France”