Hope was once again in vogue Thursday night in President Obama’s acceptance speech, after having gone the way of the green shoots. Hope has been swirling around the financial markets as well. The Fed keeps dangling QE3 out in front of them. And ECB President Mario Draghi injected a mega-dose of it with his bond-buying promise. It goosed the markets even more and powered them to multi-year highs.

Then came the jobs report. Only 96,000 non-farm jobs had been created—assuming that number is credible, despite the statistical cosmetic surgeries that are used to beautify it. Worse, June and July were revised lower by 41,000 jobs. The unemployment rate, which dropped from 8.3% to 8.1%, is just noise, and it remains unclear if it measures anything at all. But it will be THE number, the political number, that President Obama will focus on, and if all goes according to plan, it will obligingly drop to 7.9% before the election.

But the jobs report also contained the Employment-Population Ratio. By comparing the number of employed people to all people over sixteen, it outlines in unvarnished brutality the real employment situation. And it goes back to when dirt was young.

At the time, the Fed’s printing press had been running white-hot for a year. Congress was shoveling stimulus money in every direction. Federal deficits had ballooned beyond $1 trillion for the second year in a row. The new President had gotten his feet on the ground. Stock markets were rocking higher. But the employment-population ratio hit a low not seen since May 1983.

So then the magnificent jobs recovery started. And in August 2012, when our national debt blew through the $16 trillion mark, the employment-population ratio was … 58.3%.

Just about where it was in December 2009, when the unemployment rate hovered around 10%—and now it’s 8.1%. Miracles of statistical cosmetic surgery. 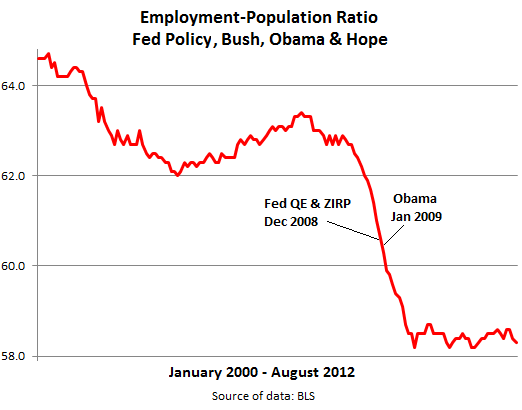 It is true, I suppose, that since December 2009, quite a few jobs have been created. I can see that in San Francisco and Silicon Valley. It’s just that the population has grown at about the same pace, and the job market as seen by the average job seeker hasn’t improved much.

The graph is also a visual depiction of what the Pew Research Center calls “The Lost Decade of the Middle Class,” during which “the middle class has shrunk in size” and has “fallen backward in income and wealth.”

It’s convenient to blame President Bush for the precipitous decline of the employment-population ratio under his watch, or President Obama for the continued decline and the long stall. But Presidents don’t have a lot of power in managing the economy—Congress and the Fed are the go-to places for complaints in that department.

Purposefully overshadowed by the jobs report was Intel. After having already dialed back hopes in July, it slashed its third-quarter revenue outlook by 7.7%. Ominously, it saw weakness in the enterprise segment and in emerging markets. On Wednesday, it was FedEx that had cut its outlook due to lower shipping volumes. Last week it was the International Air Transport Association that had gored hope: in July, air-freight was 3.2% lower worldwide than last year, and 3.6% lower for North American airlines. July was also the month when bellwether UPS issued disappointing quarterly results. It appears the “recovery” has run its course.

And that despite the gargantuan stimulus of a Federal deficit that has been over $1 trillion for five years in a row—thanks to our ever so effective Congress, abetted by the Fed. But occasionally, even slick politicians accidentally say something meaningful. This time it was German Chancellor Angela Merkel who’d wondered out loud if politicians can win elections “if we don’t always spend more than we take in.”

The answer, Mrs. Merkel, at least in the US, is no.

1 comment for “Calamity Economy Strikes Again, But Hope Is Back In Vogue”