My first experience with a physical euro was mid-December 2001 when I travelled to Europe for preliminary discussions with potential partners for the startup I ended up launching later that year. First stop: Germany. Bank showcases were filled with euro feel-good agitprop. Euro bills and coins would enter circulation on January 1, and this was part of the long-running campaign to persuade Germans to surrender their Deutsche marks. People had some apprehensions, and some wanted to retain the D-Mark, but my business contacts were gleeful: the euro would become the dominant reserve currency in the world; oil would be priced in it.

To celebrate this unique moment in history, I entered a Deutsche Bank branch and bought several euro Starter Packs, as they were called in good German. The clear plastic pouches cost DM 20 and contained all denominations of euro coins. I handed them out as souvenirs when I came home.

The following year, the euro was in every Eurozone wallet. OK, people were bitching. Things had gotten more expensive. Little but highly visible things. Merchants rounded up. An espresso in Germany might have cost DM 3 but then sold for €2, instead of €1.50 as it should have.

By then, I’d moved to Belgium—without feel for what things had cost beforehand. What I did notice was how easy, cheap, and fast transactions were with Eurozone countries. I was too busy building a company to worry about birth defects and fatal flaws of the monetary union that covers not only the 330 million people in the Eurozone, but another 150 million people in Africa whose currencies are pegged to it, and maybe 20 million people in other countries with currency pegs. And for nostalgic reasons, I would like the euro to survive.

But that may be wishful thinking. Every day brings new developments that raise my doubts further: turns out, even counterfeiters have lost confidence in the euro.

In fact, the euro counterfeiting bubble has collapsed. The ECB, in its biannual reports on euro note counterfeiting, documented the bubble and its demise.

After a fairly steady period through 2006, euro counterfeiting jumped 70% to its peak in the second quarter of 2009. Alas, following on the heels of the financial crisis, the Eurozone debt crisis began to gnaw on periphery countries, and counterfeiters lost confidence along with the rest of the financial markets. By the first half of 2012, counterfeiting had crashed 44%. And not much but thin Alpine air appears to be underneath it. 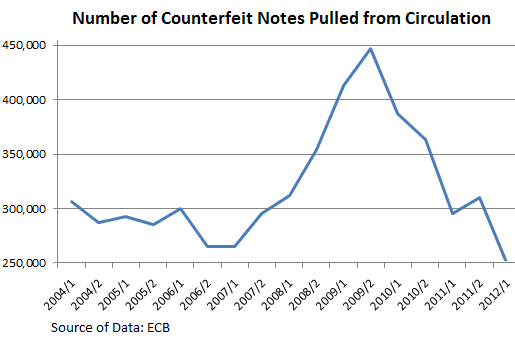 The fact that counterfeiters are throwing in the towel—worried perhaps that they’ll get stuck with high-risk but unsalable merchandise—is bad enough for Europhiles. But now we see an increasingly clear demarcation of the Eurozone into two separate parts, though not entirely along the lines of North and South often envisioned.

On one side of the line are countries whose governments can borrow at negative yields, that is, where desperate investors agree to lend money to them at a guaranteed loss, however absurd that might have seemed not too long ago. That club includes Germany, France, the Netherlands, and Belgium (!); in the secondary markets, Finnish and Austrian government debt has seen negative yields. Eurozone neighbors Denmark and Switzerland also dipped into negative yields. Negative Interest Rate Policy (NIRP) at work.

On the other side are countries whose governments lost access to the financial markets or are in the process of losing access. Among them Spain. Its yields continued to push higher, despite the €100 billion bank bailout that climbed over its final hurdle, German parliamentary approval. With 10-year paper above 7%, the country is approaching a full bailout—though it won’t solve the core problem: a collapsed economy with unemployment of 24.4% and youth unemployment over 50%.

Perhaps the Eurozone will perform a miracle and solve the debt crisis (unlikely), or all 17 nations might agree to rewrite the treaties that govern the ECB to allow it to print money and buy sovereign debt with reckless abandon (also unlikely). More likely, the can will be kicked down the road, with one or two countries exiting the Eurozone along the way. When push comes to shove, the Eurozone might break into two parts, possibly along the NIRP line, or it might break into national currencies. So I will hang on to my Starter Pack, that unopened plastic pouch of pristine euros never touched by a human hand—because one day, I’m afraid, it might become a collector’s item.

7 comments for “Even Counterfeiters Are Giving Up On The Euro”