Poor Angela Merkel. The beleaguered German Chancellor just can’t catch a break. She has already committed hundreds of billions of German taxpayer euros to bailing out collapsing Eurozone countries, or at least their bondholders, which would be the ECB, various German and French banks, and the other usual suspects. In return, she wants these countries to live within their means and restructure their economies so that the bailouts would not have to continue ad inifinitum. While the ECB’s printing press—though it’s not supposed to have one—could solve the debt crisis in one fell swoop after the model of the US, Japan, the UK, and Zimbabwe, it would create a host of problems that Germans would rather avoid. Hence bailouts in return for structural reforms and efforts to whittle budget deficits down to some “sustainable level.”

Sounds reasonable. And yet, these laudable efforts have landed her in the company of Axis-of-Evil perpetrators and other maligned characters, according to the British magazine New Statesman, and it doesn’t appear to be, though it reads like, British humor:

And it came with this awesome Terminator-inspired cover art, which does, however, have certain humorous aspects: 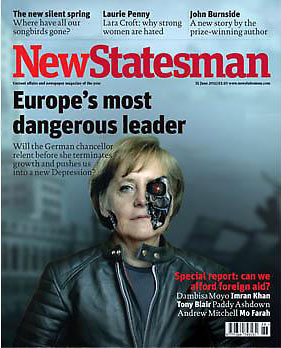 So, in this crazy world of ours, preaching the importance of living within one’s means, rather than consuming wildly and blowing borrowed money that can never be paid back, has been equated with state terrorism. And that within the harmonious community of nations of Europe!

No wonder that the Swiss are anxiously watching from their tiny enclave amid this mayhem. And people in power have started to speak up. There was Thomas Jordan, President of the Swiss National Bank, who admitted that “it’s conceivable that the entire European banking system gets into trouble.”.

Now there is Ueli Maurer, Defense Minister, member of the Swiss Federal Council, and major figure in the right-wing Swiss People’s Party (SVP), the largest party in the Federal Council. He warned in an interview that Switzerland was surrounded by many heavily wounded nations that might be “looking for success in foreign countries. And Switzerland is a sitting duck.”

Maurer lived the Swiss Dream: boy of a farmer, he served in the Swiss Army where he rose to the rank of major and commanded a bicycle infantry battalion (don’t laugh, war by bicycle was serious business). And so he has become an advocate of Swiss independence, even in a tightly interwoven world.

“Independence is the highest good we have,” he said. “We have to defend it everywhere we can.” Switzerland should not join any kind of union. Least of all the European Union, despite the government’s policy of rapprochement between Switzerland and the EU, which he dismissed: “Today, no one who isn’t completely crazy wants to join the EU.”

And he is worried. “We have to watch out that they don’t take away our wealth and our freedom.” If push came to shove, he’d choose freedom, of course. “You can lose wealth, and you can regain it,” he said, “but you can lose freedom only once.”

It wasn’t up to Switzerland to help these “tumbling giants,” he said; the country was too small and didn’t have a lot of options. “It’s a matter of monetary policy,” he said dryly. Instead, Switzerland would have to look for new allies. “We’re enjoying, for example, many sympathies in Asia. We have to profit from that,” he said. “Europe has crossed its peak.”

He raved about Switzerland’s economic and democratic model. “Handing responsibility to the people, that’s the future. Europe is in bad shape because it assumed that responsibility could be relinquished to a higher level. But in the end, no one is responsible.”

Which sums up the Eurozone bailout strategy.

6 comments for ““You Can Lose Freedom Only Once””