Disclosure: I love beer. Particularly certain kinds of what the industry calls craft beer. I’m a sucker for a good IPA, or an amber, or a pale ale. For special occasions, there is the expensive stuff. If I’m traveling, I try to discover local brews. And the first swig is one of the simplest great pleasures in life. But for now, I’ll stick to the numbers. And they’re morose for the US beer industry. Yet there is an astonishing exception: craft brewers.

There are a lot of them in the US: 1,989 last year, up 11% from prior year, and up from one in 1976, according to the Brewer’s Almanac. They employed 103,500 workers. 250 new breweries opened, 37 closed—it’s still dog-eat-dog out there; just because you know how to brew a good beer doesn’t mean you get to stick around. The phenomenal re-birth of an ancient industry: 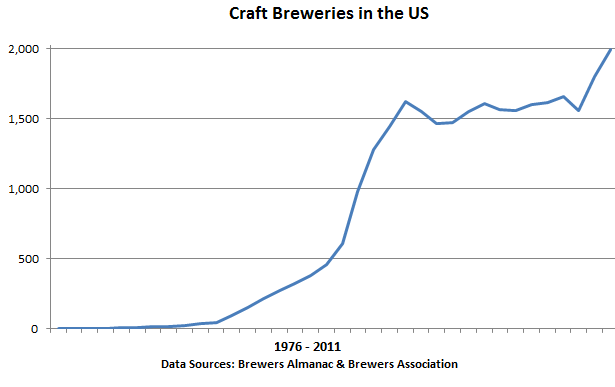 “These numbers are poised to rise even more in 2012,” said Paul Gatza, director of the Brewers Association, which represents small and independent brewers. “In February 2012, we already topped 2,000 operating breweries—a truly remarkable milestone.”

But before we get too tangled up in false euphoria about the American beer market, and the idea that it had somehow escaped the great recession, or has even emerged from it, let’s contemplate its possibly permanent misery.

Beer’s tragic fate: it used to be by far the favorite American alcoholic beverage. Even in 1992, long after wine had started climbing the popularity ladder, 47% of alcohol-consuming adults preferred beer; only 27% preferred wine, and 21% liquor. We know because Gallup began sorting out our alcohol preferences that year. Since them, beer zigzagged down and in 2005 plummeted to 36%, the lowest level of recorded Gallup history. Wine spiked to 39% to become America’s favorite drink. Then beer recovered but soon fell again, and in 2011, it was back at its record low of 35%, neck and neck with wine at 36%.

Preferences expressed in a survey don’t always translate well into gallons, barrels, and dollars. So here is a good swig of American reality: annual per-capita beer consumption. It makes mass-market brewers want to cry. There is no light at the end of the tunnel, no flattening out of the curve. America has been turning away from their product for over two decades: 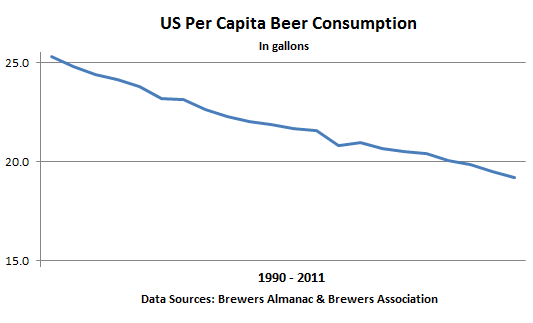 In the good old days, US brewers fretted about imports, but over the last few years, imports have actually lost market share and are now down to 12.8%. These days, what gives US brewers conniptions is the sheer terror of collapsing per capita consumption, an enemy they can’t shake. So far, they’ve had a powerful ally that helped obscure it on their income statements: population growth. A whopping 24% since 1990. But that is slowing down, and US beer production is getting slammed. 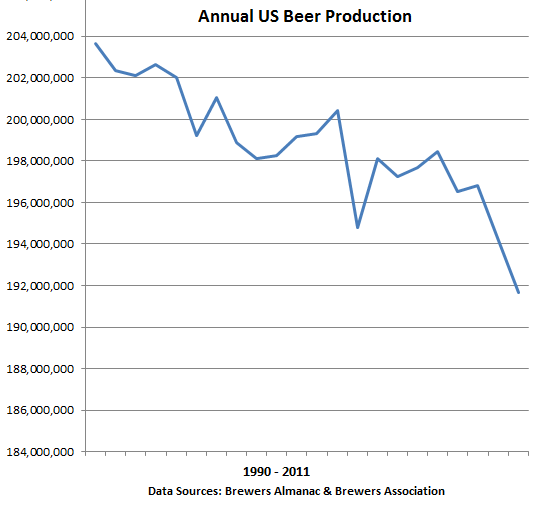 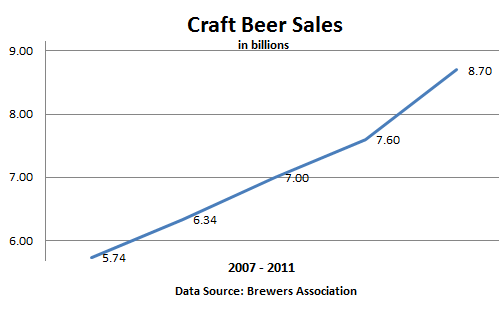 Despite the fundamental moroseness of the beer industry, it’s been an awesome year for craft brewers. What it shows is just how successful American entrepreneurs can be with their scrappy outfits in an industry of giants.

14 comments for “The Beer War on American Soil”