While Democrats and Republicans, jointly and severally, engage in an all-out pissing match over the national debt ceiling and the budget deficit that even has the Chinese worried, let’s take a moment and reflect from a safe distance on how we got here, and why nothing of significance is going to change. 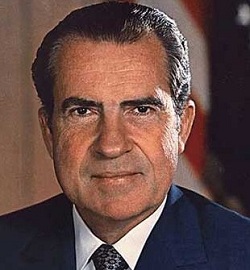 … was the last Republican President under whom our gross national debt as a percent of GDP (the accepted measure of national indebtedness in inflationary times) actually went down. Under Gerald Ford, it went up. Under Ronald Reagan, it jumped. Under George Bush père, it went up. And under George W. Bush, it began to defy gravity: During his eight years in office, our gross national debt rose from an already astonishing $5.7 trillion to a breathtaking $10.7 trillion, and during his last fiscal year in office, we added a hitherto unthinkable $1 trillion to our national debt.

Until then, we didn’t even know how many zeros a trillion had. Meanwhile, I had a chance to count them. It has 15!

During these Republican administrations, we had Republican and Democratic Congresses, and they all bent over backwards to fill the big trough that corporate America, some of us, and much of the rest of the world got fat on.

The record of Democratic administrations is a bit more mixed. Under Jimmy Carter, our gross national debt as a percent of GDP went down. Under Bill Clinton, it went down as well, quite a bit actually. But under Barack Obama, it has rocketed into clear blue sky like our favorite space shuttle on a good day, going from $10.7 trillion to, well, our national debt ceiling of $14.29 trillion.

It took Bush eight years to add $5 trillion. It took Obama a little over two years to add $4 trillion. With a Republican majority in the House. Are we like totally nuts?

We are currently running an annual budget deficit of around $1.5 trillion, give or take a few hundred billion (I never thought I’d ever casually put these words into one sentence). That’s 10% of our GDP of $15 trillion. But what are these $15 trillion made up of? Well, you guessed it. A huge part is government spending:

So, for example, if we balanced our budget for the next fiscal year by cutting $1.5 trillion in spending, our GDP would decline by the same $1.5 trillion, a stunning hit of –10%. Good luck, Hell-No Republican Caucus!

That’s why no one CAN balance the budget. Ever. It would be political and economic suicide. We, as a country, have become systemically addicted to the crack cocaine of massive deficit spending … just like Greece, Ireland, Italy, Spain, etc. Our much vaunted private sector depends on that $1.5 trillion and would collapse without it.

That’s why our very conservative American Chamber of Commerce is opposed to most spending cuts. That’s why liberal Democrats are opposed to them. That’s why run-of-the-mill Republicans only pay lip service to them, but when it comes to the actual cutting, they lose their appetite. Only the tea-partiers have the balls to speak up and mean it. But they don’t know yet what they’re wishing for.

So now, we have this awesome and very entertaining pissing match unfolding before our very eyes where everyone is aiming at anyone who opens his or her mouth (oh gross!). But after a while, they’ll get tired of it, and they’ll sit down, wet and bedraggled, and work out a deal that “cuts spending” a decade from now, and everyone will declare victory.

Meanwhile, the budget deficits will remain out of control for years to come, our national indebtedness will continue to balloon, and the Fed will continue to monetize our deficit (“printing money” we call it), which will gradually demolish the value of everything we own and erode the earnings power of 99% of us hardworking people out there. So enjoy the spectacle of the pissing match. Because the rest of it is just an unwatchable tragedy.