Oh dude, glad no one saw it.

In the minutes of the January 29-30 meeting, released this afternoon, the mentions of “strong,” “strongly,” and “stronger” edged down for the fourth meeting in a row, this time by three points, to 22. The Hawk-o-Meter has now backed off quite a bit since the August 2018 high – when the Fed was rubbing it in that it would raise rates four times in the year – but it is still in outlier territory and redlining: 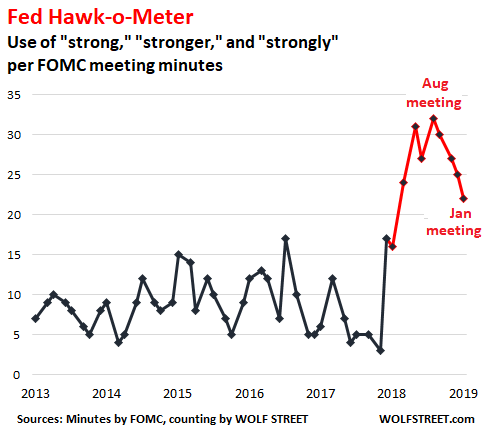 The average frequency of “strong,” “strongly,” and “stronger” between January 2013 and December 2017 was 8.7 times per meeting minutes. In the January meeting minutes, the 22 mentions were still 153% higher than that pre-redline average.

The average over the past 10 meetings minutes, starting with the December 2017 meeting, when the Hawk-o-Meter redlined inched down to 25.1 mentions.

Actually, “strong,” “strongly,” and “stronger” were mentioned 25 times in total, but as is not unusual, two were fake strongs, so to speak, and I removed them from the tally. But they’re interesting in their own right:

One referred the to strong-but-less-strong syndrome:

With regard to the postmeeting statement, members agreed to change the characterization of recent growth in economic activity from “strong” to “solid,” consistent with incoming information that suggested that the pace of expansion of the U.S. economy had moderated somewhat since late last year.

The other referred to the sudden hair-raising spike in repo rates at the end of 2018:

Repurchase agreement (repo) rates spiked at year-end, reportedly reflecting strong demands for financing from dealers associated with large Treasury auction net settlements on that day combined with a cutback in the supply of financing available from banks and others managing the size of their balance sheets over year-end for reporting purposes.

But “moderated” also showed up:

And the brave new world of “patient.”

“Patient” was first and feebly introduced with one just mention in the minutes of the December meeting: “The Committee could afford to be patient about further policy firming.” This has now turned into a cacophony of “patient” with 13 mentions, including:

Early in the new year, market sentiment improved following communications by Federal Reserve officials emphasizing that the Committee could be “patient” in considering further adjustments to the stance of policy and that it would be flexible in managing the reduction of securities holdings in the SOMA.

Subsequent communications from FOMC participants were interpreted as suggesting that the FOMC would be patient in assessing the implications of recent economic and financial developments.

A patient approach would have the added benefit of giving policymakers an opportunity to judge the response of economic activity and inflation to the recent steps taken to normalize the stance of monetary policy.

A patient posture would allow time for a clearer picture of the international trade policy situation and the state of the global economy to emerge and, in particular, could allow policymakers to reach a firmer judgment about the extent and persistence of the economic slowdown in Europe and China.

But the minutes warned:

“Patient” might disappear without notice, if “uncertainty” abates, inflation rises, or economic growth gets hot again:

Many participants observed that if uncertainty abated, the Committee would need to reassess the characterization of monetary policy as “patient” and might then use different statement language.

And “patient” might then be replaced with something like the predecessor phrase, “some further gradual increases in the target range for the federal funds rate.”

Meanwhile, as we’re biting out fingernails, waiting for the drama to unfold,… The Fed’s QE Unwind Reaches $434 Billion, Remains on “Autopilot”