Under pressure from the banks, the government may take down the site.

There is no telling if the Consumer Financial Protection Bureau (CFPB) will even survive the next few years, given the opposition to it in the White House, Congress, and the banking lobby because it has become just too inconvenient for banks.

One of the inconvenient aspects for the banks is the CFPB’s database of consumer complaints against financial institutions and other companies. This database is public and can be searched.

Remember Wells Fargo? It became the most hated bank in America in 2016. You can go to CFPB’s site and search this database for Wells Fargo or any other bank and see what crops up. Go ahead, take a look while you can and put your bank of choice in the search box — before the data base gets taken off line.

So I searched for Wells Fargo, and the first item that crops up at the very top is this report from September 2016: “Consumer Financial Protection Bureau Fines Wells Fargo $100 Million for Widespread Illegal Practice of Secretly Opening Unauthorized Accounts.”

Or the next one down, from August 2016: “CFPB Takes Action Against Wells Fargo for Illegal Student Loan Servicing Practices.”

If you click on “Reports” in the left sidebar, the top report is this: “What you need to know if you were harmed by Wells Fargo.” This goes on, search page after search page. Clearly, it would be a lot better if this dang site got taken down.

Then there is the “Monthly Complaint Report.” It summarizes consumer complaints against banks by state, for all 50 states. For example, the report for October 2017 (Vol. 26) shows that the CFPB “handled” 91,482 complaints from 2011 through Oct 2017, to which 97% of the companies responded in a “timely” manner.

And it has this chart of the annual nationwide volume of complaints that it “handled”: 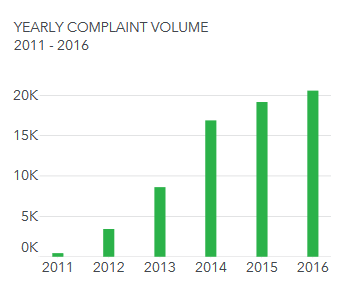 Among the top five “products” that triggered those complaints, “debt collection” is Number 1 (SM = service members, veterans, and their families): 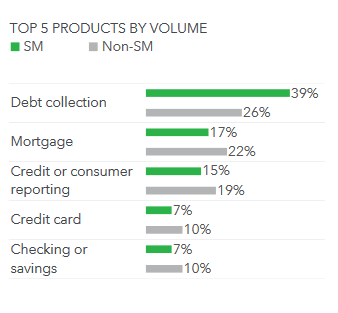 These are just the complaints the CFPB has been able to “handle” – that is, get companies to respond and deal with them in some manner. But as of June 1, 2017, the CFPB has received “over 1,218,600 complaints.” As of that date, about 1.13 million complaints remained “unhandled.”

“This database has become an extremely useful tool that can increase the accountability of powerful financial institutions on behalf of the consumer,” explains a report by Lend EDU, which dug into this data base more deeply by analyzing “exactly 223,992 consumer complaints” and built a table of 49 banks, from regional banks to the largest behemoths in the US, and ranked them by the number of complaints per $1-billion in deposits.

However, LendEDU dug around long enough to find a dozen banks for which the CFPB had not received any complaints at all last year. These are in the second table below. In both tables, “deposits” are denoted in billion dollars.

And here are the dozen banks for which LendEDU could not find any complaints that the CFPB received in 2017:

These are not complete lists. They’re samples of the nearly 5,000 commercial banks in the US. But if the public loses access to this database — in other words, if you cannot check out the bank before you do business with it — then, well, the worst banks would be the real winners.

And here are my stories about my darling Wells Fargo, such as: Wells Fargo Gets Clocked in California

33 comments for “The Banks with the Most Consumer Complaints: A Dive into CFPB’s Database”