In Catalonia the economy is already beginning to feel the pinch from the rise in political tensions, as tourist numbers plunge 20% to 30% and as hundreds of companies, both domestic and foreign, move their headquarters to other parts of Spain, albeit in most cases only on paper.

But there’s one business that’s doing a brisk trade: the flag business.

Wherever you go these days, flags are everywhere. For years the estelada flag, the starry symbol of Catalan independence, has been a ubiquitous feature of the urban landscape. But now the Spanish flag is doing its best to catch up. As Catalonia’s separatist movement grows in confidence, more and more balconies in Madrid, Valencia, Seville and other Spanish cities, including even Barcelona, are sporting the bold red and yellow of the Spanish flag.

I took these photos in Barcelona. The estelada draped from windows and balconies along with the Catalan Senyera flag (red and yellow stripes without star, the former flag of the Crown of Aragon): 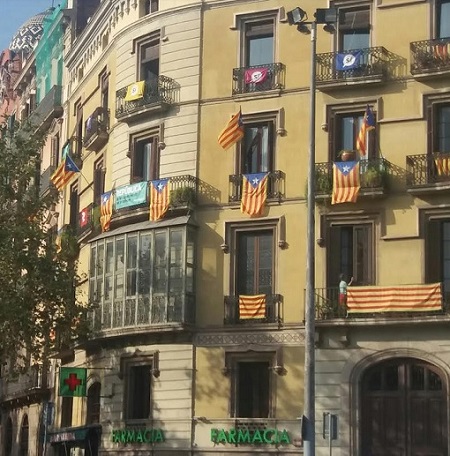 And the estelada on tractors: 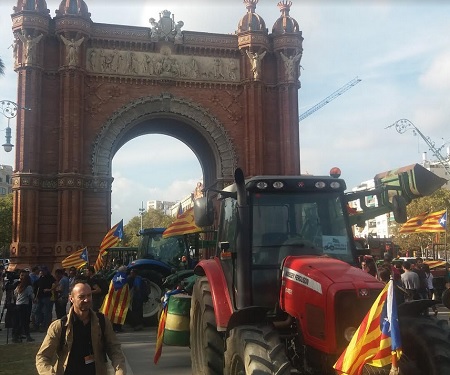 Here’s a mix of the Catalan Senyera and the Spanish flag: 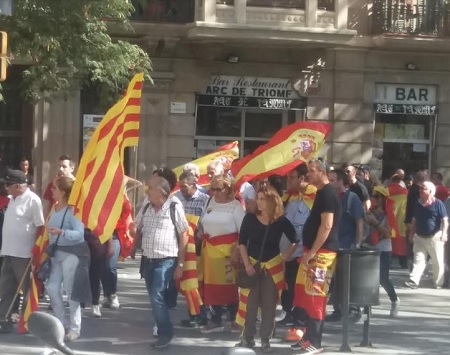 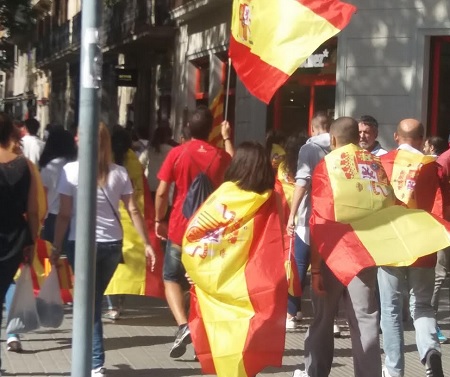 The Chinese are happy to manufacture these flags. And the Pakistanis, Indians and Bangladeshis that run many of Spain’s convenience stores are happy to sell them. As the Catalans are fond of saying, pela és pela (money is money).

While all this frenetic flag buying, selling, waving and draping may be good business for some, it points to a very dark reality for Spanish and Catalan society: two deeply rooted, diametrically opposed forms of nationalism with a bleak not-so-distant past are on the verge of a head-on clash. While much of the focus of the international media has been on divisions between Spain and Catalonia, it’s within Catalonia itself that the most toxic effects of this political crisis are being felt.

Communities within the region are fracturing, families are splintering and friendships are breaking apart as the politics of sectarianism worm their way into just about every public and private space.

Stress levels are rising and many people are struggling to sleep. A friend of mine told me last week that the morning after the violence-marred referendum on Oct.1, two colleagues at the office where she works, belonging to a company whose management is fiercely unionist, were entrusted with the unpleasant task of finding out where all the other junior employees’ loyalties lie.

“On the side of dialogue” was my friend’s improvised response.

The pressures to conform are at times unbearable. The wife of a close friend complained at the weekend that she had been strongly criticized by her work colleagues for not taking part in last Tuesday’s general strike. If there’s another strike she’ll probably stay at home, if only to avoid the accusatory glares of her fellow colleagues.

Another friend, of Spanish-German descent, was interviewed by a German newspaper about his feelings over recent developments in Catalonia. Having suffered serious setbacks in his work as sales manager for a German chemicals company and facing the possibility of having to move to Madrid as a direct result of the political chaos in Catalonia, my friend was pretty candid about the chaos it’s causing.

But when the journalist sent him the final copy of the article, he saw that she had featured his full name and the name of the company he works for. “You can’t do that,” he told her. “I could lose my job. My company could lose all its contracts with local government institutions. I could even be blacklisted.” In the end the journalist agreed to remove all mention of my friend and his business from the article.

That more or less sums up the bleak reality that has descended on Catalonia, a place where it’s becoming increasingly difficult to express your opinions freely and openly without paying a high price. The fact that this is happening in a country where the roots of democracy are still fairly shallow should give pause for thought. By Don Quijones.

Hopes that Catalonia’s woes could be contained are fading. Read…  Catalonia Crisis Far From Over Despite Market Surge

29 comments for “Days of Living Dangerously in Catalonia”