This image truly sums up their complete idiocy right now.

It’s absolutely maddening watching the first quarter results float in from the large-cap energy companies. And the one image I continue seeing in my mind that I can’t shake is of lemmings going over a cliff: 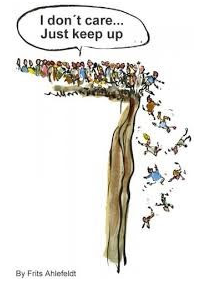 This image alone truly sums up the complete idiocy of virtually all of the U.S. oil producers right now; they are showing no creativity or independence, doing what everyone else is doing, despite the fact that this behavior is leading them all to a very, very sad moment, if not their own ultimate demise.

What has become increasingly clear to me is that without a change in the mass behavior of major and mini-major oil exploration and production companies (E+Ps), we’re still a long way from the end of the oil bust, and therefore from the next oil boom.

Oil has been overproduced since late in 2013. That glut decimated oil prices in 2014, finally bottoming at a low price below $30 and now recovered towards $50, but still well below a price that enables anyone to make a decent profit except for the conventional Middle East producers – and even THEY need a far better margin to support their national budgets.

But how have oil companies reacted? Did they stop drilling oil at a loss? No, not really – instead they cut their budgets for investments in new projects, trimmed costs to the bone and called on technology to make getting a barrel of oil out of the ground as cheap as possible.

Then, having merely cut the SPEED of their losses, they patted themselves on the back, planned on INCREASED production, got Wall Street to restructure and reinvest in their losing ways, and sat back and waited for oil prices – and their profits – to recover.

Oil producers didn’t plan on this self-destructive strategy. They all needed continued cash flow to service bond issues and dividends. They also reflexively continued to pump oil at a loss to fulfill the wrongheaded expectations of analysts – and shareholders, where production growth is, for no good reason, the gold standard for progress.

The end result, however, has been incredibly self-destructive. Gluts have stubbornly refused to clear, pushing global rebalancing time lines further and further into the future – and putting hard caps on oil prices.

The latest quarterly reports are showing just how disastrous this lemming-like behavior has been for virtually all U.S. independent E+P’s. Check out the reaction to Noble Energy’s (NBL) latest quarter – down 6%. Devon Energy – down 2%. Apache – down 4%.

And the ever snake-bit Anadarko Corp. – last week the victim of a Colorado house fire caused by waylaid Anadarko wells leaking and exploding, killing two – is now bearing up under another disappointing quarter. Down more than 9%!

So, now what? What do you do with these lemmings, taking their money and most assuredly ours, over the cliff with them? 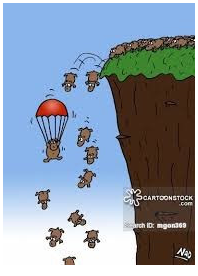 There are those that have walked over the edge with all the others, but have still managed to deploy at least a partial parachute – and finding these better equipped creatures will be my job over the next several columns, as oil resets for a second (or third) move that necessarily must force at least a few more oil producers to stop selling ever increasing amounts of oil on the market at a loss.

For now, we are in no rush – for a while, we’ll sit back – content to watch the lemmings plummet downwards without us. By Dan Dicker, Oil & Energy Insider

And now we have a gasoline glut as we enter the “summer driving season.” Read… What Crack Spreads Say about Oil Prices

42 comments for “Self-Sabotage: What Are US Oil Producers Thinking?”