Railroads slash capital spending, but plow more money into buying back own shares, after two years of Freight Recession.

CSX reported quarterly earnings late Wednesday. Revenues increased 9.5% from the terrible quarter a year ago, which had been the worst quarter in terms of revenues since Q1 2010! So it’s no big feat to beat last year’s fiasco quarter. At $2.87 billion in Q1 2017, revenues are sill 5.3% lower than they’d been in Q1 2015. This time, moribund coal shipments had increased.

Since March, there’s a new guy at the throttle. Hunter Harrison is known as a cost cutter. And that was the theme of the earnings announcement. The railroad said that it plans to cut costs further. It had already slashed its capital spending plans for 2017 by 18% to $2.2 billion. Now more cuts for 2017 are likely.

But in the same breath, it announced that it would plow $1 billion into buying back its own shares. Stocks jumps.

Wall Street loves that – without considering the broader ramifications: Cuts in capital spending turn into lower revenues for their suppliers. But CSX isn’t the only one.

Railroad revenues have been dropping since their peak in 2014. In this, they’re a poster child for the quintessential large US corporation, including Big Tech, such as glamorous IBM.

The table shows the debacle the seven largest freight railroads active in the US face, in order of their 2016 annual revenues. Note that CSX and Norfolk Southern used to be #3 and #4 on this list. But thanks to their respective 12.6% and 14.7% revenue plunges over the past two years, they have been surpassed by Canadian National, whose revenues edged down less than 1% over the period. 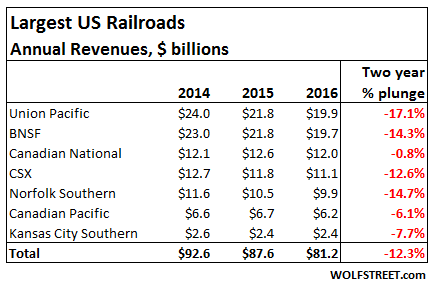 And so big spending cuts were announced in January. The seven Class 1 freight railroads will slash capital spending by 11%, from $16.7 billion in 2016 to $14.9 billion in 2017. And they might cut still more, once CSX’s new CEO is done digging through the numbers, and other railroads might follow with more cuts of their own to please Wall Street.

Railroad capital spending goes into the expansion and maintenance of the network of tracks, the largest outlay a railroad faces, the purchase of locomotives and rolling stock, and other things, including this year, developing and installing automatic braking systems that regulators have been clamoring for and that are required by the end of 2018. Since railroad capital spending is so large, that’s where big cost cuts can be found.

Union Pacific slashed its capital spending budget by 11.4% from $3.5 billion in 2016 to $3.1 billion in 2017. Over half of the 2017 budget will go into its infrastructure. It also includes $300 million to implement the new automatic braking system. Its previous plan to acquire 100 locomotives in 2017 as part of a purchase commitment was cut to 60 locomotives. Delivery of the rest will be delayed till 2018. Last May, I pointed out the haunting sight of 292 Union Pacific engines idled in Arizona Desert. 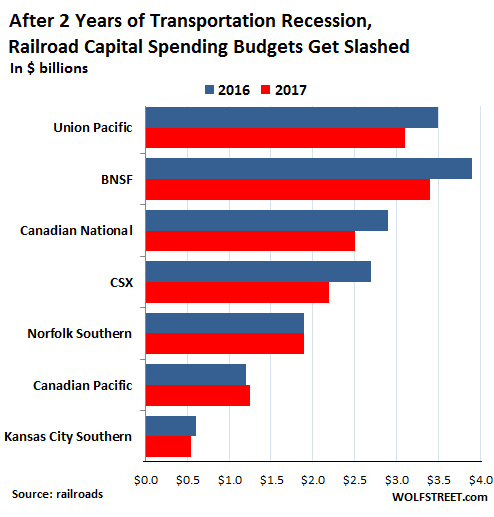 But plans could change, and costs could be cut further. CSX will likely lead the way. Wall Street loves that.

Spread across the spectrum, all cuts in capital spending – from locomotives to railroad ties – translate into falling revenues for other companies. And then they too will cut cost to grapple with their own falling revenues.  And so on. The vicious cycle of dropping corporate revenues that trigger cuts in capital spending that translate into more drops in revenues… are exactly what bedevils this economy.

But hey, they can always make it up with share buybacks.

Railroads transport many of the 17 million or so new vehicles from the plant or from the port to the city where they’re sold. Could this be the next brake shoe to drop? Read…  Meltdown of Houston Auto Sales Has Eerie Financial Crisis Look