This isn’t the Industrial Revolution.

How many jobs do robots – whether mechanical robots or software – destroy? Do these destroyed jobs get replaced by the Great American Economy with better jobs? That’s the big discussion these days.

The answers have been soothing. Economists cite the Industrial Revolution. At the time, most humans replaced by machines found better paid, more productive, less back-breaking jobs. Productivity soared, and society overall, after some big dislocations, came out ahead. The same principle applies today, the soothsayers coo.

But this isn’t the Industrial Revolution. These days, robots and algorithms are everywhere, replacing not just manufacturing jobs but all kinds jobs in air-conditioned offices that paid big salaries and fat bonuses.

Just today, BlackRock announced a plan to consolidate $30 billion of their actively managed mutual fund activities with funds that are managed by algorithms and quantitative models. As these software robots take over, “53 stock pickers are expected to step down from their funds. Dozens more are expected to leave the firm,” as the New York Times put it.

“We have to change the ecosystem – that means relying more on big data, artificial intelligence, factors and models within quant and traditional investment strategies,” BlackRock CEO Laurence Fink told The Times.

In a similar vein, “robo-advisors” are becoming a cheap and hot alternative for many customers at major brokerage houses, replacing human financial advisors. A lot of the grunt work that used to be done during all-nighters by highly paid law school grads in big law offices is now done by computers.

So job destruction due to automation is not a blue-collar thing anymore. It’s everywhere. But soothsayers have been steadfastly claiming that for each destroyed job, the Great American Economy will generate more and better jobs, because, well, that’s how it worked during, you guessed it, the Industrial Revolution.

But two economists have changed their mind (more on that in a moment) and published a gloomy working paper.

Daron Acemoglu and Pascual Restrepo studied how the increase of industrial robots between 1990 through 2007 has impacted US jobs and wages. They found “large and robust negative effects of robots on employment and wages across commuting zones.”

Their working paper is available at the National Bureau of Economic Research (NBER). This is the organization that is responsible for tracking US business cycles and calling “recessions.”

There are two effects of robots, the authors point out: The “displacement effect” when robots eliminate jobs; and the “productivity effect” as other industries or tasks require more labor and thus create jobs (for example, designing, making, and maintaining robots). But these productivity effects no longer suffice to compensate for jobs that industrial robots destroyed.

Nationally – so beyond the commuting zone – effects were less massive as some jobs destroyed in Detroit might be replaced in other places:

If the ratio of robots per 1,000 workers rises from 1 robot to 5 robots, wages would tumble by up to 2% nationally! In the same scenario within a “commuting zone,” wages would drop nearly 3%!

In 2014, there were 1.7 robots per 1,000 workers in the US, up from about 0.7 in 2000. Auto manufacturing is the leader in the use of industrial robots. Other sectors include electronics, metal products, plastics, and chemicals.

Between 1990 and 2007, industrial robots have eliminated a net of 670,000 jobs, according to the study. For perspective, this chart shows the total number of employees in manufacturing, which dropped by 36% from the peak of 19.5 million in 1979 to 12.4 million in February: 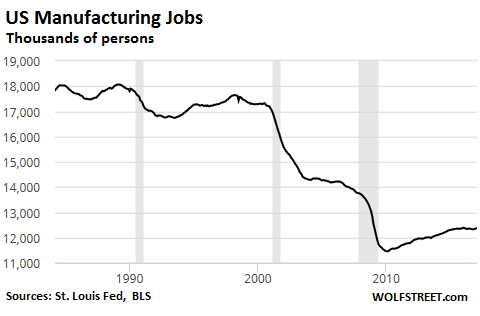 However, manufacturing output, adjusted for inflation, soared due to automation until 2007. During the Great Recession, output crashed. Now it has finally edged past its prior peak: 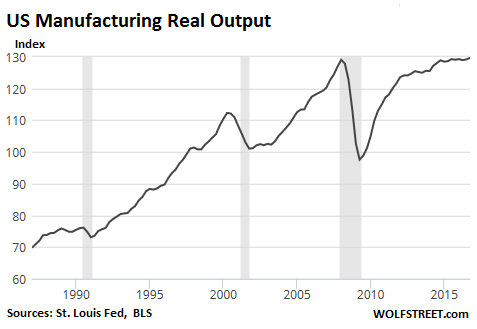 The number of industrial robots in the US is expected to quadruple. So job losses in manufacturing will continue, even if output rises.

The authors were once in the opposite camp but now have changed their mind about net job destruction by robots. The New York Times:

The paper is all the more significant because the researchers, whose work is highly regarded in their field, had been more sanguine about the effect of technology on jobs. In a paper last year, they said it was likely that increased automation would create new, better jobs, so employment and wages would eventually return to their previous levels. Just as cranes replaced dockworkers but created related jobs for engineers and financiers, the theory goes, new technology has created new jobs for software developers and data analysts.

But that paper was a conceptual exercise. The new one uses real-world data – and suggests a more pessimistic future.

The researchers said they were surprised to see very little employment increase in other occupations to offset the job losses in manufacturing. That increase could still happen, they said, but for now there are large numbers of people out of work, with no clear path forward – especially blue-collar men without college degrees.

But industrial robots are the great equalizer. They reduce the importance of wage differences, for example between the US and a cheap-labor country like China: Unlike labor, robots cost the same everywhere.

China is now on the forefront of robotizing its manufacturing plants, as wages have been soaring for years. In doing so, China is gradually losing its advantage as a low-wage country. In this scenario, manufacturing in the US can be competitive with China, particularly after figuring in the costs of transportation, time delays, risks of all kinds, and the like. So manufacturing could actually grow again in the US, but the jobs won’t come back.

And auto manufacturers face some challenges. Last time they tried this was in 2009! Read…  Automakers Resorts to Biggest Incentives Ever Just to Slow the Decline in Sales

173 comments for “How Many Jobs Do Robots Destroy? Answers Emerge”