A red flag that’ll be highlighted only afterwards as a turning point.

US bankruptcy filings by consumers rose 5.4% in January, compared to January last year, to 52,421 according to the American Bankruptcy Institute. In December, they’d already risen 4.5% from a year earlier. This was the first time that consumer bankruptcies increased back-to-back since 2010.

However, business bankruptcies began to surge in November 2015 and continued surging on a year-over-year basis in 2016, to reach a full-year total of 37,823 filings, up 26% from the prior year and the highest since 2014. Retailers and companies affiliated with the energy sector, in particular, were sinking deeper into the mire.

Throughout that time, consumer bankruptcy filings continued to decline year-over-year until November 2016. And that was the low point. Then credit stress began to exert its pressure and became apparent in the official channels, when arising number of consumers started throwing in the towel over the past two months to seek protection from creditors in bankruptcy court.

Total bankruptcy filings by consumers and businesses have now also risen year-over-year for two months in a row, for the first time since 2010.

Bankruptcy filings are highly seasonal, reaching their annual lows in December and January. Then they spike into tax season, peak in March, and zigzag lower for the remainder of the year. The data is not seasonally or otherwise adjusted. It’s raw and unvarnished, with large seasonal swings.

The chart below of total US bankruptcy filings shows the drop in filings since the Great Recession through November 2016. The red line denotes the trend of the low points (December, January), and how the trend changed direction over the past two months: 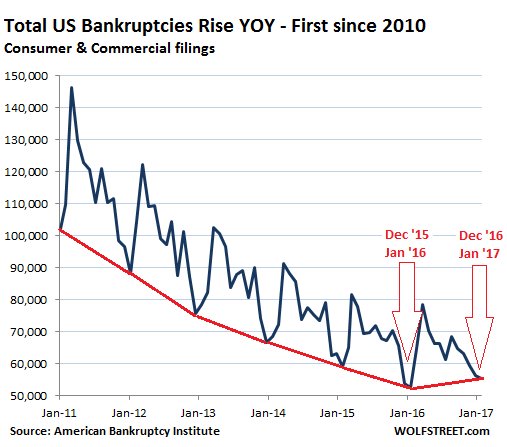 It’s likely that the trend of rising bankruptcies will continue. ABI Executive Director Samuel Gerdano puts it this way: “As interest rates increase and the cost of borrowing rises, more debt-burdened consumers and businesses may seek the financial shelter of bankruptcy.”

Here is the irony. According to all major consumer sentiment surveys, economic confidence has soared in December and January. It has been called the “Trump effect.” It was also noted that this new-found economic confidence was divided by party line, and that it had flip-flopped from before the election. The sentiment of the owners of small businesses too has surged since the election. But the economy itself hasn’t changed all that much in two months. Sentiment surveys can be funny that way.

But for a rising number of consumers and businesses, there is a bitter reality: the economy is tough for them, and now there’s the hangover from eight years of ultra-low interest rates: a mountain of debt.

The dizzying borrowing by consumers and businesses that the Fed with its ultra-low interest rates and in its infinite wisdom has purposefully encouraged to fuel economic growth, if any, and to inflate asset prices, has caused debt to pile up. That debt is now eating up cash flows needed for other things, and this is causing pressures, just when interest rates have begun to rise, which will make refinancing this debt more expensive and, for a rising number of consumers and businesses, impossible. And so, the legacy of this binge will haunt the economy – and creditors – for years to come.

But the first year-over-year rises in bankruptcies in December and January since 2010 aren’t signs of an impending collapse of the global financial system or whatever. Rather, it’s an early red flag, among other red flags, of the kind that is ignored until it is too late, and that is highlighted only afterwards, and with hindsight, as the turning point in the consumer’s ability to continue playing this debt-binge game.

Despite what you might think, automakers did not “cut back” on fleet sales. But keep an eye on rideshare companies. Read… Car Sales Crash, But It’s Complicated