Having spent years burning through any remaining goodwill among its users still clinging to Internet Explorer, Microsoft is apparently having problems getting them to use its Edge browser that is part of Windows 10. Even after about 15 months and three upgrades, the market share of Edge is still minuscule.

Over the past 30 days on wolfstreet.com, per Google Analytics, our readers used these five browsers the most:

The bottom one is Microsoft’s new miracle browser that people refuse to use. And IE has dropped to 4th place with a 10% share. A few years ago, well, many years ago, before the arrival of Chrome, IE was the number one browser, having crushed Netscape during the First Browser War (being bundled with Windows did the trick).

According to Net Market Share, Edge 12, 13, and 14 combined have a market share of 5.2%. Everyone has slightly different market-share numbers. But at that level – whether it’s 3% or 5% doesn’t matter – Edge is an also-ran, something statistically insignificant, abandoned by burned-out IE users.

So Microsoft appears to go to extremes to force Windows users who still cling to their IEs to upgrade to Windows 10 and switch to Edge.

It had already gone to extremes to get Windows 7 users – a reasonably happy crowd, unlike the Windows 8 crowd – to upgrade for “free” to Windows 10. The inescapable desktop harassment-and-interdiction campaigns from Microsoft finally stopped a few months ago, and Windows 7 users could go about their business unmolested. The survivors all knew: If someone is trying to push you that hard to “upgrade” to a “free” program that took years and thousands of people to put together, it’s a sign that you are the product, and you’re going to get sold.

But when Microsoft threw in the towel on its Windows 10 harassment-and-interdiction campaign, at about that time, IE, never particularly stable, became very unstable. And it has gotten worse since.

I use Chrome, Firefox, and IE all day long, in Private Browsing mode, doing different things with different browsers, on two different computers, to make it confusing for internet tracking programs to collect my browsing and personal data. I want someone else to be the low-hanging fruit.


And IE has been driving me nuts recently. So here is what I got today, over the course of about two hours, I took screenshots to show how terrible IE has become.

The first warning sign: the fan from the laptop starts whirring maniacally because the processor is busy running around in circles, and it’s generating heat. Soon, Norton opens a popup at the lower right-hand corner of the screen, warning, “High Memory Usage by: Internet Explorer”: 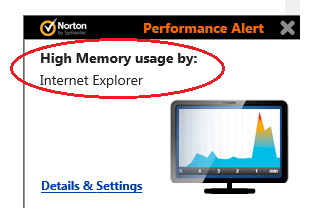 A little later, I got this message across the bottom of the screen (I took out the blank middle part, indicated by the red line, to make it fit the column width here):

By now I have a bunch of tabs open. The machine is slowing to a crawl. The processor is running in circles and doesn’t have time for much else. After a while, when I try to open a new tab, IE informs me that it is “not responding.”

I soldier on, determined to take this to the bitter end. Soon this box pops up: 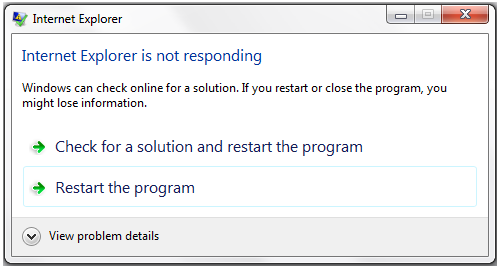 I click “Restart the program.” It shuts down an offending page and tries to reopen it which doesn’t work either, and the same box pops up. So I close that particular page directly and move on. Things are getting worse. The cursor is starting to dance around, and it’s difficult to maneuver it to the right spots. Taking a screenshot and pasting it into Paint requires enormous patience.

To see what’s going on, I open the Windows Task Manager. It shows that processor usage is 100%, when normally, with what I do, it should be under 10%. And the system uses 89% of the Physical Memory: 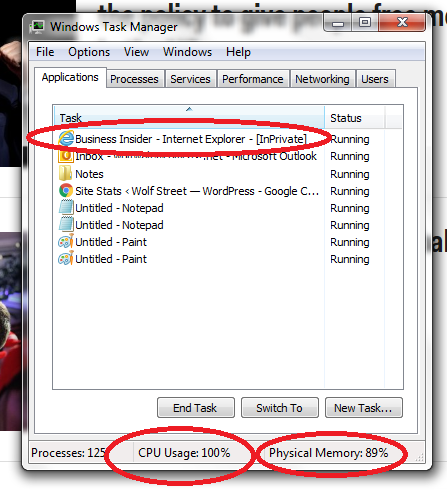 This is becoming a battle. Progress is at snail’s pace. Hardly anything moves. The bitter end is nigh. I can smell it. Not much later, it’s coming. IE hangs up. Links don’t work anymore. The scrollbar is dead. Switching tabs is impossible. I try to close IE, but can’t. So I return to Windows Task Manager to close IE that way. This all too familiar sign pops up. 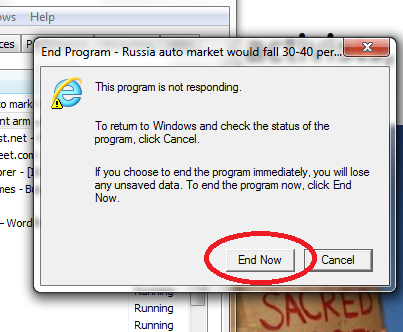 Once IE is shut down, the fan stops whirring, things speed up, the cursor moves normally. The battle is over.

For current and former IE users, it’s easy to explain why the number of Edge users is still low. Edge may be great. But why even try? Chrome, Firefox, and other browsers beckon. And the above frustrations – which heavy IE users encounter on a daily basis – are leaving their marks. But apparently, Microsoft has trouble digesting the message. Instead, it seems to hound its surviving IE users by crashing their work in order to push them to upgrade to another Microsoft browser. But the market-share data shows that something in this twisted math doesn’t quite seem to work.

This would be hilarious if the broader ramifications weren’t so serious! Read…  Amazon Algorithm Makes Decision about WOLF STREET, Hilarity Ensues

90 comments for “Is Microsoft Purposefully Degrading/Crashing Internet Explorer to Bully Users into Upgrading to Windows 10 & Edge?”