But where did the money go? Fume and gnash your teeth.

The US gross national debt – after having been successfully disappeared from public discussion – has jumped by $1.38 trillion in fiscal 2016, which ended Friday. Ironically, this is not one of my infamous typos.

So OK, there were some timing issues with the debt ceiling and so forth a year ago, after which the debt jumped $340 billion in one day.

To smoothen out those factors, we look at fiscal 2016 and 2015 combined: the gross national debt ballooned by $1.71 trillion over those two years, $850 billion on average each year. There were only four years in the history of the US, when deficits exceeded this average: 2009-2012.

Not too shabby, for a booming economy. But follow me. This is just to lay down some basic numbers, as we’re drilling into the mystery of how the government borrowed $4 trillion more than it said it spent since 2003. Those $4 trillion in borrowed money – the bonds are still out there – went up in smoke, according to government numbers. But money doesn’t go up in smoke. It flows somewhere. So follow me. 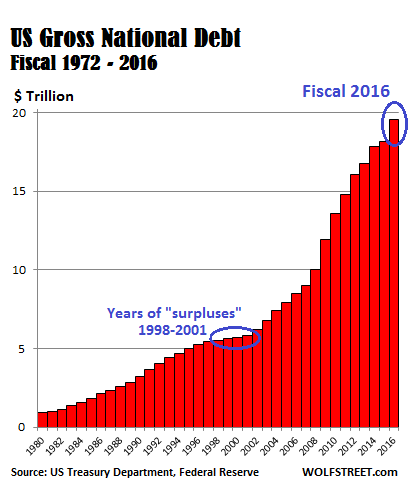 In government accounting, outlays for infrastructure projects or a fighter jet are not set up as assets and depreciated over time. They’re recognized as an expense and thus show up in the budget as an outlay. Under this system, debt rises because government spending exceeds revenues. Over time, the amount by which debt  rises and the amount of the cumulative deficits should be roughly the same. If you run $5 trillion in deficits over 10 years, you have to borrow those $5 trillion, which are added to existing debts, which should therefore rise by $5 trillion.

But not with the US government.


Remember when the US government had “surpluses” in the years 1998-2001? Well, yes, according to the Office of Management and Budget, those four years produced a combined $559 billion in “surpluses”: 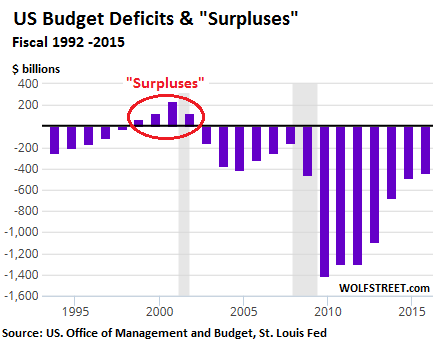 So did the debt fall by that amount? Nope. The debt continued to rise each year, as the government continued to borrow more and more money though it had a “surplus”: over the four years of “surpluses,” the government added $394 billion to its debt, as the scary chart above shows.

But that was then and this is now. Now, the hole through which money disappears has gotten a lot bigger.

In Fiscal 2016, the government ran a deficit of $590 billion, per the latest estimate of the Office of Management and Budget. Last year, the deficit was $438 billion. So combined over $1.0 trillion. But it borrowed an additional $1.7 trillion to pay for 1.0 trillion in deficit spending. What happened to the $700 billion that it borrowed and that were not officially spent?

Is it just a timing difference that averages out over the years? Nope.

Since 2003, the government deficits published by the Office of Management and Budget amounted to $9.26 trillion. So the Treasury should have had to borrow that much to make up the difference. But over the same period, the national debt rose by $13.3 trillion. Meaning, $4.04 trillion had gone up in smoke.

This chart shows the official deficits (red columns) and the increase in outstanding debt (blue columns) each year: 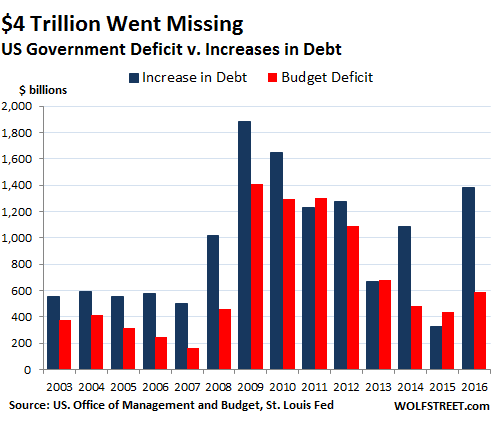 The $4 trillion was borrowed and the bonds were issued and the amounts are still outstanding, but the proceeds from the bond sales went out the door, off the books!

Might it be due to the Social Security surplus, which does count as an asset and so lowers the deficit? Nope. In fiscal 2015, the surplus was only $23 billion, and it was likely less than that or even a small deficit in fiscal 2016. So that doesn’t explain the $700 billion difference between debt and cumulative deficits over those two years.

We’ve all heard the stories of how the Pentagon’s books are sordid fiction, how the Army’s financial statements for 2015 were “materially misstated,” how it made $6.5 trillion in wrongful adjustments to its books and manipulated the numbers, etc. etc. But that’s a different – and additional – matter.

With the missing $4 trillion, I’m talking about money that the government borrowed but never spent officially, that it never acknowledged even existed. This $4 trillion is on top of all the internal shenanigans at various departments, including the Department of Defense.

In my articles, I’m like a lawyer: I rarely ask a question to which I don’t already know the answer. But this is one of those times.

It doesn’t matter who sits in the White House: it happened under Clinton (the “surpluses” of 1998-2001), under Bush, and under Obama. It’s standard operating procedure, but hidden from view. And it’s getting bigger.

I do know, however, that the money went somewhere – and that US taxpayers owe it and have to struggle with the debt and the interest on it for all eternity. And there’s another thing I know: our government’s accounting of what it spends and therefore the deficit numbers are BIG lies: since 2003, it admitted to an accumulated deficit of $9.26 trillion, but the national debt during that time rose by $13.3 trillion. That’s not a rounding error, but a liar margin of 43%!!

And the fate of this deficit-stimulated, consumer-based US economy? Read…  “Negative Growth” of Real Wages is Normal for Much of the Workforce, and Getting Worse: New York Fed

198 comments for “This is Why US Gov. Deficit Numbers are a BIG Lie”