The supply of rental units on the market is ballooning.

“The trend in rental prices this month was mixed”: so started out the Zumper October Rent Report for the month of September.

“Mixed” is not exactly a bullish term – not when it includes the two most expensive housing markets in the US, San Francisco and New York, where rents have fallen, in some cases sharply, on a year-over-year basis, as the supply of new apartments already on the market and coming on the market is enormous.

In San Francisco, the median asking rent for a one-bedroom apartment fell 5.5% year-over-year to $3,420, according to Zumper, which analyzes rental data from over 1 million active rental listings in multi-family buildings and does not include single-family houses on the rental market. For a two-bedroom, it fell 4.4% year-over-year to $4,780.

It was the third month in a row of year-over-year declines. The last time the market was negative year-over-year was in April 2010. Since then, rents have soared at astonishing rates. Hence the San Francisco term for it: “Housing Crisis.” It’s when even teachers can’t afford to live in the city – unless they’ve been in a rent-controlled apartment for years and don’t get evicted.

OK, $4,780 a month is still a huge amount for a two-bedroom. Median asking rents means 50% are higher, 50% lower. But not many people, even in San Francisco, can afford those kinds of rents.

To put that in perspective, that median two-bedroom costs the tenant $57,360 a year, which is about the median household income in the US. So there’s a little bit of an affordability problem, even in San Francisco, and hence a demand problem.

Now incentives are piling up, such as one month free rent – previously a rare occurrence in San Francisco. These incentives are not included in asking rents. The rent decline for the median two-bedroom amounts to $2,523 a year. Together with one month free rent, the actual decline in asking rent for the first year is $7,303, or about 12%! A big plunge for both landlord and tenant. But it’s just the beginning.

What a difference! Here is what happened a year ago, according Zumper’s October 2015 rent report:

High priced cities are getting more expensive; in fact, the top four cities on our list all saw rent increases in the near term. San Francisco widened its gap between NYC…. September again marked a new record high for the city, now with a median one bedroom of $3,620 and two bedroom of $5,000. Rents in the city are up 13.1% in the past year.

Note the double-digit year-over-year rent increase. At the time, there were zero incentives.

The supply of rental units on the market is ballooning.

On Zillow, there are 1,237 apartments listed as available for rent in San Francisco, up 7.7% from a month ago (1,149 units) when I last wrote about it. The Zillow image below only shows 500 units. If all available units were shown, over one-third of San Francisco would be solid purple. Note the dots that say “9+.” They represent larger buildings, some of them with dozens of vacant rental units. You can see these towers South of Market and in some other pockets: 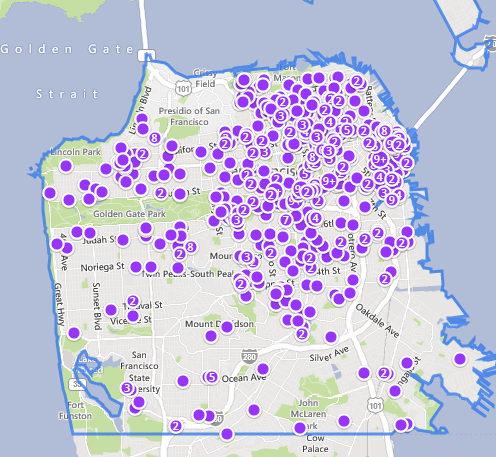 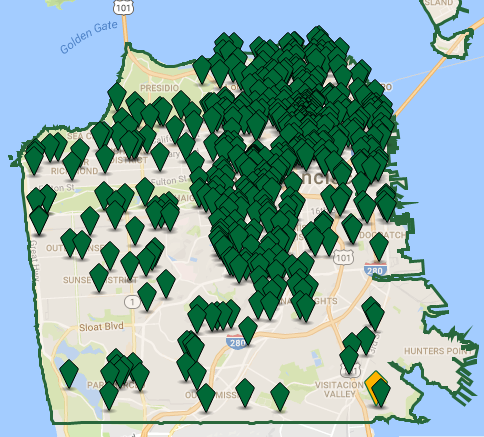 The densest clusters of units in both charts are in areas where the high-rise construction boom is most obvious. It’s not just apartments. Condos purchased by investors play a role too. The construction boom created numerous condo towers. Investors who bought the preconstruction units but have no intention of living there are trying to sell them, which is getting difficult, so they’re showing up on the rental market.

Most of these new units are higher end. But as landlords are cutting rents and piling on incentives, they’re pressuring the levels below, and then those levels have to cut rents and offer incentives to compete with then nicer new units, and over times, these pressures cascade all the way down.

New York City is facing similar dynamics: high rents that are crimping demand and a construction boom that is adding an enormous amount of supply.

A sea change from a year ago. Zumper’s October 2015 rent report on New York City: 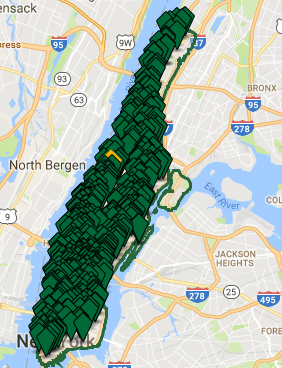 For landlords that are putting new units on the market in these two cities, the slide in rents is very inconvenient. Capitalization rates have become razor thin in recent years. The process of declining rents and increasing incentives, as new supply surges for years to come, screws up their entire math.

In terms of commercial real estate, this will pressure prices. Given the high leverage, there will be defaults, and creditors will end up with some of those buildings.

But renters, after having their lifeblood squeezed out of them over the past years, will be able to breathe a sigh of relief. Neither of these two markets will ever be cheap, but rents are likely to become less ludicrous. Prospective renters have an opportunity to become tough negotiators, now that they can walk away and shop elsewhere.

Of the 12 most expensive large rental markets in the US, median rents for one-bedroom apartments fell in 7 cities year-over-year. Suddenly there’s a lot of red on what had been solidly green for the past six years: 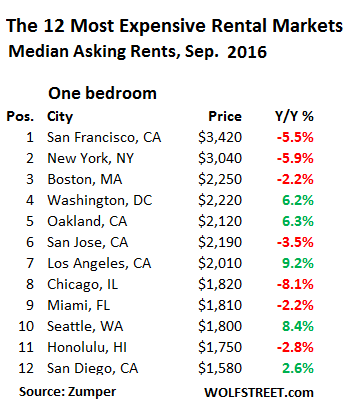 In the two-bedroom segment, similar trends are playing out, with rents in six cities of the top 12 in the red and one unchanged: 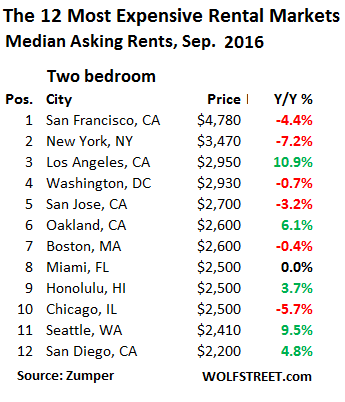 Note in both charts the declines in Chicago and the surges in Los Angeles and Seattle – hence the infamous “mixed” label.

The tables don’t include smaller rental markets with super-high rents such as Palo Alto, in Silicon Valley, were the median rent is an utterly insane $5,800.

Below are the top 100 markets, in order of the amount of rent for one-bedroom apartments. Check out your city to see what the trends in September were (tables by Zumper, click tables to enlarge): 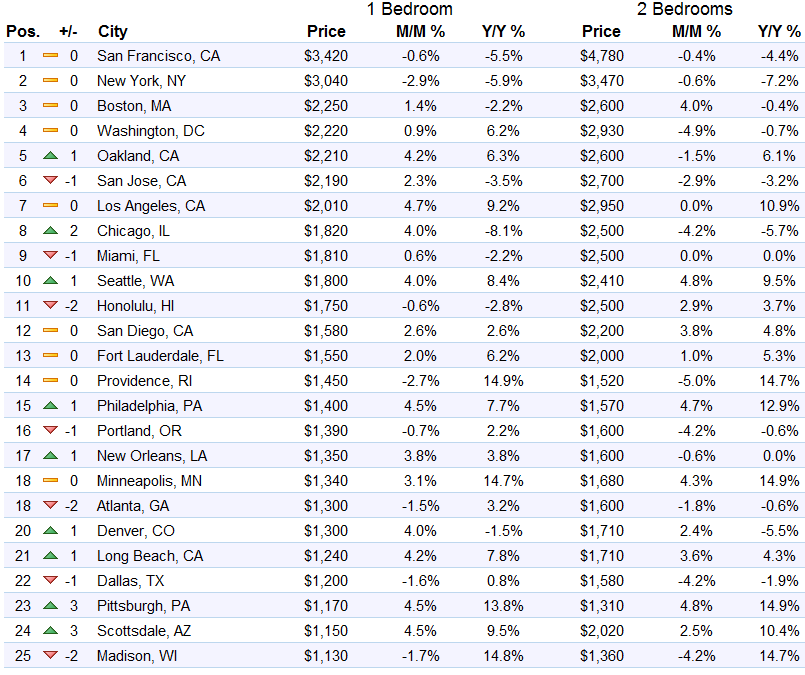 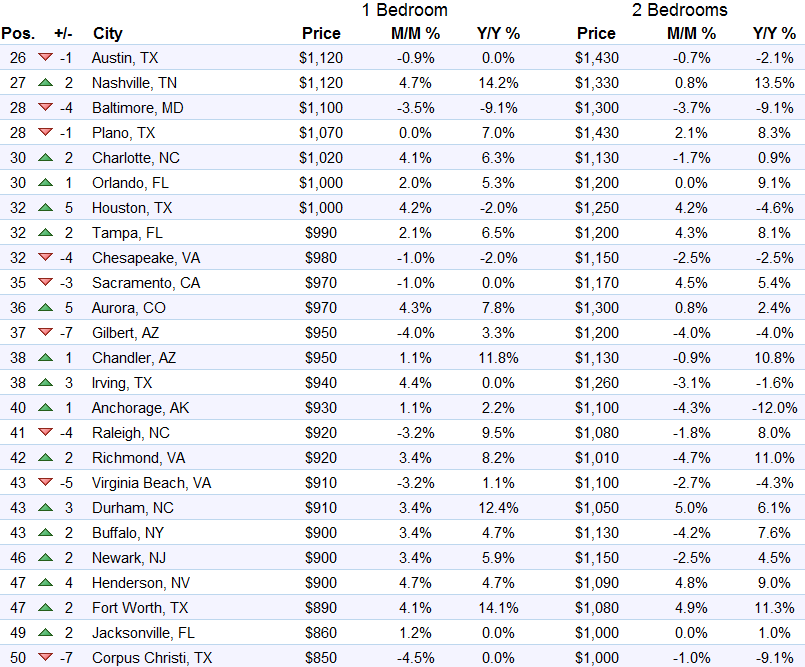 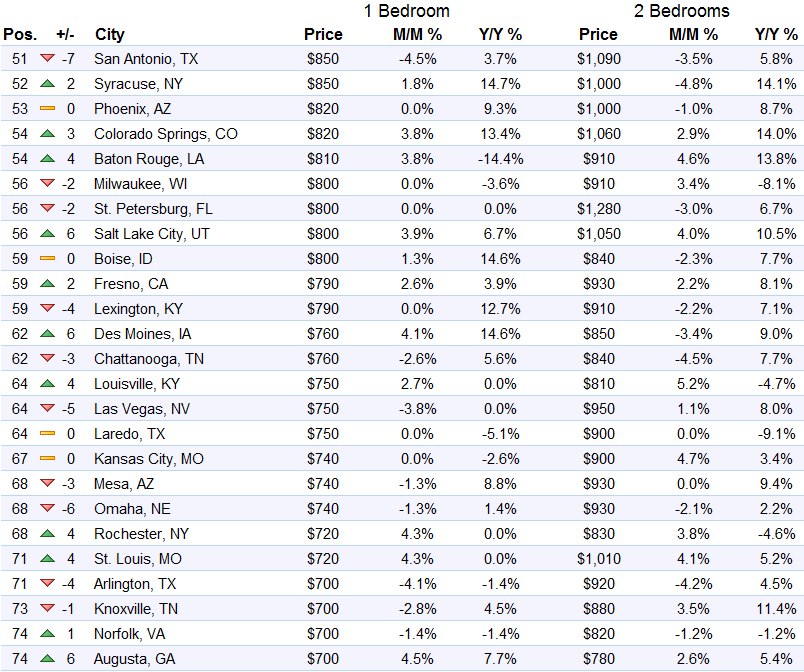 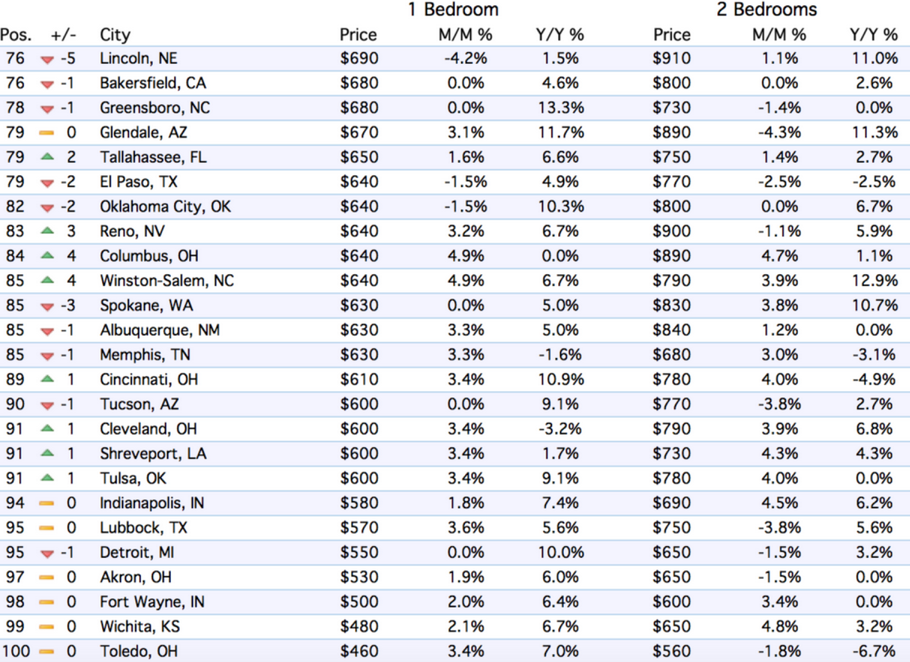