“Leveraged loans” that banks extend to junk-rated over-leveraged companies are too risky to keep on their books. They sell them to institutional investors. Or they slice and dice them and repackage them into Collateralized Loan Obligations (CLOs) and sell those to institutional investors. Leveraged loans trade like securities. But the SEC, which regulates securities, considers them loans and doesn’t regulate them. No one regulates them.

The Fed has been jawboning banks into backing off for two years. Banks can get stuck with leveraged loans. They did during the Financial Crisis, which helped sink the banks.

As so often, there’s a private-equity angle to it. Companies owned by PE firms borrow money from the bank in order to pay a “special dividend.” It’s a favorite form of asset stripping. This way, if the company goes bankrupt (we’ll get to an example in a moment), the PE firm and other owners got a big chunk of profit out beforehand.

Dividend-backing loans are particularly risky because the proceeds are not invested in productive activities that would generate cash flow and allow the company to service the loan. The money just disappears, the debt stays.

These dividend deals are the litmus test for a hot credit market. They die when reason begins to ripple through the credit market, when lenders tighten the screws and look askance at deals that hollow out an issuer’s balance sheet.

But they thrive when investors and banks go on a frenetic search for yield, when balance-sheet risks that had been clearly visible a moment ago suddenly dissolve into ambient air, when, in other words, investors have such an appetite for loan paper that they will eat anything.

This is now happening once again.

Back in July last year, nearly $11 billion in leveraged loans to pay dividends were issued. Then the credit market spiraled down. In August, less than $2 billion were issued. Activity petered out, and almost none were issued between December and March.

But by that time, central banks had begun to panic. The Fed flip-flopped about rate increases. The Bank of Japan entered negative-interest-rate absurdity. The ECB promised new and even crazier goodies…. And voila!

By April, $2.5 billion in dividend-backing leveraged loans were issued. And in May $7.6 billion, the most since July last year, and up 40% from May a year ago!

“A serious comeback,” as LCD put it in its report. “Investor appetite in the U.S. leveraged loan market was on full display last month.” And this is what the sudden resurgence looks like: 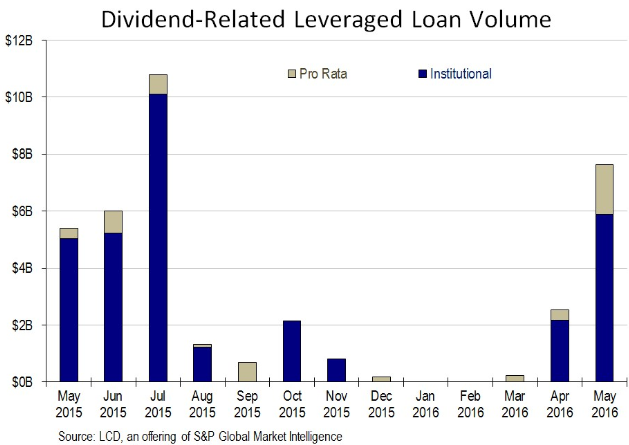 In practice, a leveraged loan to fund a “special dividend” can turn out like this: San Diego-based Millennium Health, the biggest drug-testing lab in the US and owned by its executives and private-equity firm TA Associates, issued a leveraged loan of $1.8 billion in April 2014. It was during the peak of the credit bubble. JPMorgan syndicated it. The pieces were gobbled up by Oppenheimer Funds, Fidelity Investments, Franklin Resources, and other institutional investors. Millennium used $195 million of the proceeds to pay off debt that TA Associates held and $1.297 billion to fund a “special dividend” to its owners, including its executives and TA Associates.

Then it got very messy. By June 24, 2015, the loan was trading at 41 cents on the dollar. On November 10, the company filed for bankruptcy, “after settling federal claims that it improperly billed the government for running urine tests on dead people and checking senior citizens for angel dust,” as Bloomberg put it at the time.

And in January 2016, as the company emerged from bankruptcy, the San Diego Tribune added this about the deal the judge had approved:

It also contained an unusual provision that shielded the former owners of the company – including founder James Slattery and some of his family members, former directors and executives, and the private equity firm TA Associates – from any future lawsuits stemming from a $1.8 billion loan the company got in 2014.

About $1.2 billion of the loan was used to pay a “special dividend” to TA Associates and Slattery, court papers say. Slattery, through a holding company and various family trusts, got 55 percent of the money, more than $600 million.

The company restructured. Creditors (including retail investors with loan mutual funds) took a licking. But the recipients of the “special dividend” were able to keep the money. That’s why PE firms love “special dividends” funded by these leveraged loans. And that’s why they’re a sign that investors, driven to near-insanity by central bank policies, have once again closed their eyes to risks in order to make a tiny buck.

But in the real economy, things aren’t so rosy. And in Texas, sales tax collections, a raw and unvarnished measure of retail sales, just experienced their worst plunge since the Financial Crisis. Read… Consumers in Texas Begin to React