“Intrigued by gold and its price action.”

I expected February to be better than January for the simple reason that January was so bad, and markets don’t go down in a straight line. Markets in North America were barely able to eek out a gain during February, and now I think we’re at the tail end of that relief period for markets.

Much of the recent rally has been spurred by short covering, which forces buyers into the market when they don’t really want to buy. Here’s what Morgan Stanley said today about short-covering by massive, computer-driven funds:

Quants have now covered for 9 straight sessions (days) which is the longest uninterrupted cover streak in over 2 years (period starting January 2014).

I’ve noted many times how the bond market has not confirmed the recent stock market rally. In addition, the amount of money participating in the rally has been pathetic as seen in our recent blog post here.

Furthermore, the sectors within the stock market that have rallied this year demonstrate a very defensive tone. Staples, telecom and utilities are the go-to sectors during bear markets and uncertain times. They are boring, reliable businesses that aren’t very tied to the economic cycle and they are rockin’ it. The charts below also show how the very popular and still heavily owned healthcare sector is not participating in the rally.

One thing I’m keeping my eye on is the recent strength in the US dollar. In sympathy to stronger than expected inflation data, the US dollar had a strong showing today. Should the rally continue and break higher through 100 on the chart below, it will spell trouble for risk assets globally. A strong dollar is what caused all the havoc in the markets in the first place. 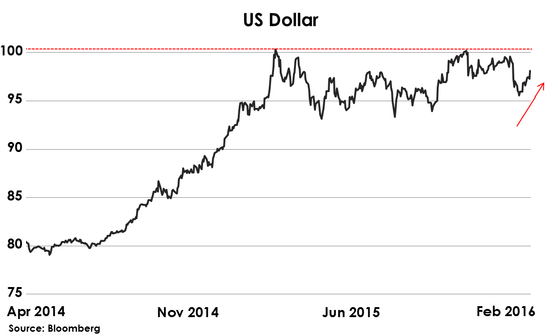 Lastly, I will leave you with this great comment about gold from Jeff deGraaf, at Renaissance Macro Research, one of the most intelligent market analysts out there:

We’re intrigued by gold and its price action. The metal had a big move over the last few weeks, and is now consolidating those gains. We believe this consolidation is buyable, and our trend model is now bullish for the barbaric relic. We’ll see which is more barbaric, negative rates or a store of value that has never in the history of the world, ever defaulted. The institutional inertia of the last 30 years is slowly eroding.