Why Oil Keeps Falling off the Chart

After having been through the greatest two-year loss on record, the price of oil plunged 9.6% on Wednesday and in evening trading. As I’m writing this, WTI hit $32.62 a barrel, a new low since the desperate depth of the Financial Crisis, when it very briefly kissed $30.28 a barrel on December 23, 2008, before bouncing off sharply.

This time, it’s serious. Brent, the global benchmark, has crashed to $32.75, an 11-year low. This isn’t a quick scare that happens during a Financial Crisis. It’s the result of a persistently growing glut.

Since the oil price plunge began in July 2014, every rally, every “opportunity of a lifetime” to buy oil “for cents on the dollar” has turned out to be a falling knife.

This is what the three trading-day, 15% crash of WTI looks like: 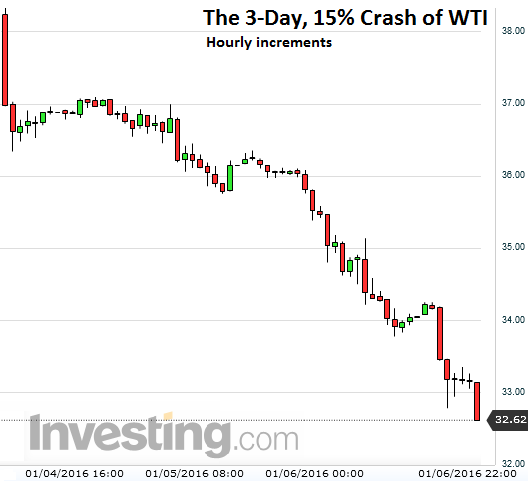 The contagion of the oil price plunge has been drifting into other sectors of the US economy, housing and office space in Houston, the state budget in Alaska, jobs, manufacturing…. Investments have gone up in smoke. Loans have gone bad. Defaults, restructurings, and bankruptcies are now a routine occurrence. Banks are looking over their shoulder. PE firms are licking their wounds from their mega-bets on fracking made in prior years, and they’re licking their new wounds from having tried to catch many falling knives.

This isn’t going to be an easy bust to get through. It’s a US problem. And it’s a global problem.


In the US, crude oil production started declining on a monthly basis in mid-2015, according to EIA estimates. But despite those monthly declines, production averaged 9.3 million barrels per day in 2015, the highest rate since 1972, and a 7% increase over 2014.

The chart shows the hair-raising stock levels. I added the two red lines to juxtapose the already high stocks at this time last year (above the 5-year range, gray area) with the current level: 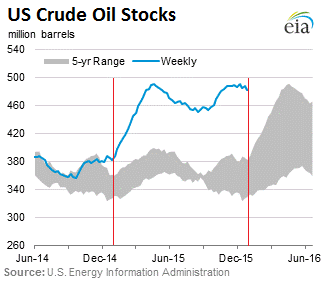 However, the spooky thing in Wednesday’s report was the buildup of 10.6 million barrels in gasoline stocks, the largest weekly buildup since 1993. Without it, there wouldn’t have been a crude oil drawdown!

And all this comes on top of the kerfuffle between OPEC members Saudi Arabia and Iran. It will make any kind of OPEC deal for production cuts unlikely. Iran is itching to ship its production into the global markets when the sanctions are lifted. And Saudi Arabia has its own reasons to maximize production. So unlike prior flare-ups in the Middle East, this time, they all appear to work against oil prices.

Whatever the daily hopes and fiascos that dominate the oil trade, two things remain fundamental: global production and consumption. And there, things are becoming uncomfortable.

In the fourth quarter, global production of crude oil and other liquids actually dropped, according to the EIA estimates, but so did global consumption.

The slowdown in China? Today, Chinese stocks crashed as trading got going, and after the Shanghai Composite plunged 7.2%, trading was halted. Now everything is stuck. Over the past four trading days, the index is down 12%! Something is seriously wrong in China, whether or not the government wants to admit it. And some of it is hitting global oil consumption.

The slowdown in India doesn’t help…. Whatever the reasons, despite a drop in production, the oil glut just got worse.

In the chilling chart below, the top half shows to what extent global production has exceeded consumption quarter after quarter for the last two years. Note how in the last quarter, both production and consumption declined. 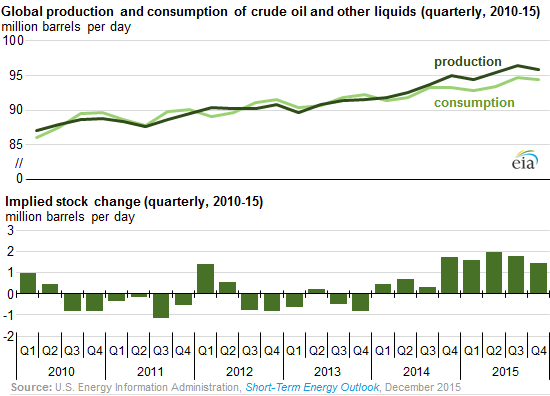 This overproduction, and now declining consumption, resulted in a stupendous increase in global inventories (bottom half of the chart), a trend that started in earnest in Q4 2014. The EIA estimated that 2015 experienced a “net inventory build of 1.72 million barrels per day, the highest rate since at least 1996.”

Already global corporate defaults hit the highest level since 2009, with the US leading the way, while the US Distress Ratio has soared. Read…  Global Corporate Debt is Coming Unglued

48 comments for “Oil Plunges to $32-Handle, Chinese Stocks Crash and are Halted, Whiff of Mayhem Breaks out”