The market has recovered from the August and September lows bringing the S&P 500 back between 2,000 and 2,150 the trading range we’ve sat in most of the year. The price action in the CDS market does not confirm the bounce in equities though. The chart below is the S&P 500 and the investment grade CDS spread (inverted) going back to 2013. These two indices tend to move together since lower credit worries (lower CDS spreads) are a good signal for stocks, but as you can see in the chart these indices have diverged. 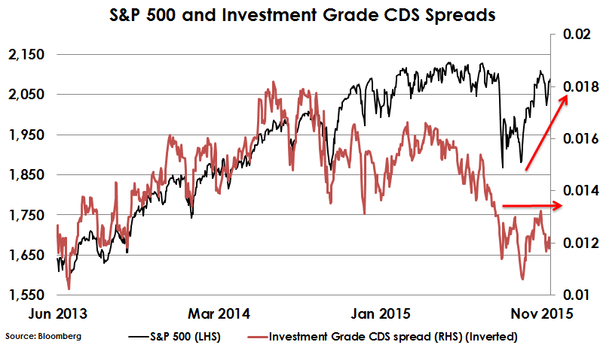 Typically in this type of situation, I look at the bond market for confirmation, and right now it is giving an early warning. The S&P 500 has rallied since August but CDS spreads have stayed flat signaling everything isn’t clear for a sustained rally. Additionally as I have noted here and here, the market rally has been narrow with fewer and fewer stocks leading the index higher which is also a sign the rally isn’t very strong.

Another recent trend has been the renewed strength in the US dollar after the Fed talked up a December interest rate hike. As you can see in the chart below, the US dollar has had a nice run the last month and is approaching new highs. 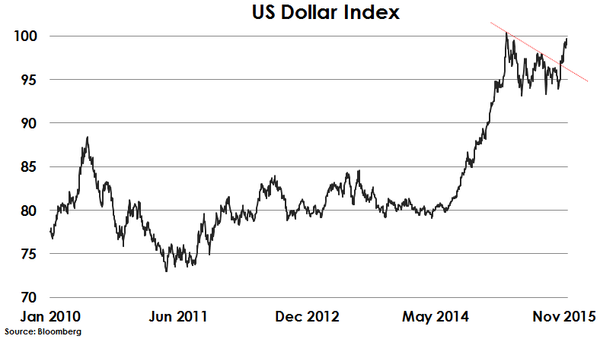 Positioning in the US dollar has declined since the beginning of the year (see the chart below). So although the move in the dollar has been sharp, the current positioning is not an impediment for it to continue higher. 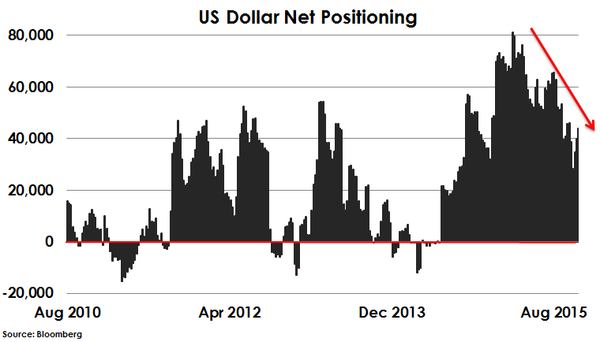 And the junk-bond market mini-rally comes to “an abrupt end” without an “obvious catalyst,” as Chesapeake’s Bonds & Shares collapse. Read… Capital Destruction Rages Beneath S&P 500 Tranquility

5 comments for “Why We Aren’t Buying this Rally”