Japanese consumers have borne the brunt of Abenomics even as the government has coddled Japan Inc., and as the Bank of Japan’s no-holds-barred money-printing campaign has pumped up the stock market.

They’ve had to digest a jump in the consumption tax, declining real incomes, and a devalued yen that makes import purchases, such as gasoline and a million other things, more expensive and that moves trips to foreign countries, long a cherished activity for the inhabitants of the island nation, out of reach.

It has shown up in the Consumer Confidence Index, released today by the Cabinet Office. The survey, covering households of two or more persons, paints a dreary picture. In July, the index fell 1.4 points to 40.3, the lowest level in six months. All sub-indices were down: “overall livelihood” fell to 38.1; “income growth” – a sad joke in Japan – fell to 39.6; “employment” fell to 44.7; and “willingness to buy durable goods,” such as cars, fell to 38.8.

Japanese households haven’t been exactly an enthusiastic lot. In the years between 2004 and 2007, the Consumer Confidence Index ranged from 45 to 50. But in early 2007, it began diving. By the time their general malaise had pushed the index down into the mid-30 range, the Financial Crisis blew up, pushing the index down even further. It bottomed out at 27. Consumer confidence then regained some feeble momentum to vacillate between 40 and 43, only to be felled by the horrific earthquake and tsunami of March 2011.

In late 2012, Shinzo Abe rode along on hope, promise, and a huge free lunch: unlimited printed money that would solve all of Japan’s problems. The honeymoon lasted over a year, until May 2013. That’s about when Japanese consumers came in contact with the conflux of rising prices and stagnating or falling incomes mixed with the anticipation of a broad consumption tax increase, effective April 1, 2014. It did its magic and hammered down consumer confidence. Things have been crummy ever since.

And it has mauled auto sales.

The Big Three Japanese automakers, which are global companies, are able to cover the malaise at home through an Abenomics miracle, the debauched yen. It allows them to translate the results from overseas operations and the value of exports into much weaker yen. If they had to report in dollars, they’d look pretty sad. But the market loves it that the debauchery of the yen sprays some superficial gloss on their income statements.

The debauched yen is of no help in their home market, however. And total vehicle sales – cars, trucks, and buses – have been cascading down relentlessly.

In July, 425,093 total vehicles were registered, according to the Japanese Automobile Manufacturers Association (JAMA), down 7.6% from July last year.

Auto sales are very seasonal in Japan. They surge toward the end of the fiscal year (March 31), with March being the peak month of the year. In April, sales collapse from March, and then revert back toward the mean. Various government incentives tend to skew sales results as well.

The consumption tax hike brought with it some special effects: consumers front-loaded on big-ticket items, including cars; hence the surge in car sales in the three months through March 2014. But it didn’t last long.

In this chart of monthly sales from 2011 through July 2015, note the slope of the blue lines that provide a year-over-year comparison of the more prominent months, starting with January 2014 (click on chart to enlarge): 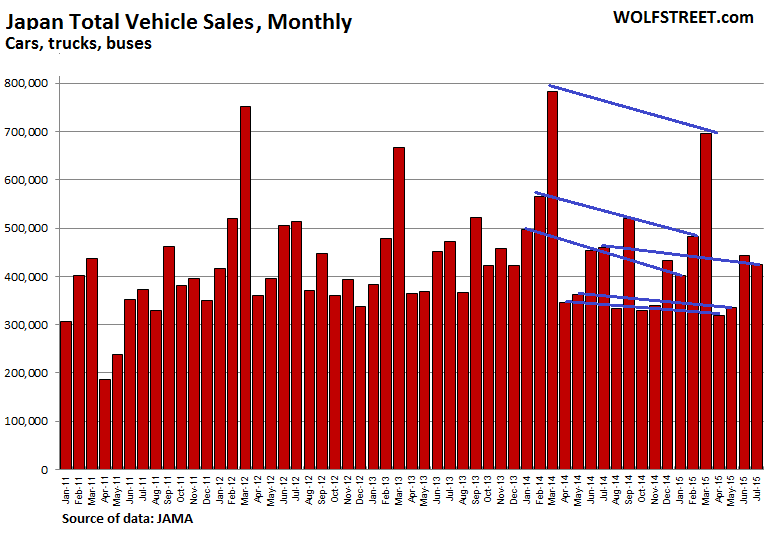 The chart below shows total vehicle sales for the month of July of every year, going back to 2011, the earthquake year when commerce in Japan essentially came to a halt for months. Note how sales have dropped 17% from July 2012 to July 2015. Abenomics became Japan’s economic religion in late 2012: 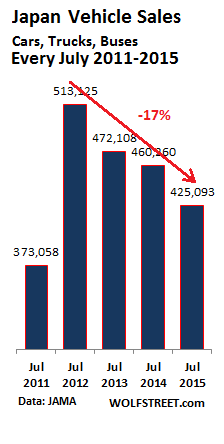 For the first seven months this year, 3.102 million new cars, trucks, and buses were sold in Japan. That’s down 10.6% from the same period in 2014, which included the phenomenal pre-consumption-tax-increase front-loading party in January, February, and March, the month when it culminated with 783,384 vehicle sales. Alas, in March 2015, only 695,412 vehicles were sold, down 11.2%.

This chart shows total vehicle sales for the first seven months of the year, going back to 2011: 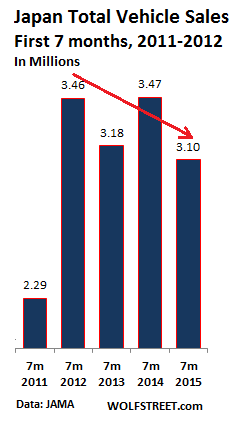 Turns out, in terms of total vehicles sales, the first seven months this year have been the worst January-July period since earthquake year 2011.

This is a great embarrassment for the economic religion of Abenomics. And a religion it is, requiring a huge leap of faith that enough miracles will intercede to make it all work out somehow. But miracles are rare these days. Instead, there is a bitter reality: Japanese consumers are being strung out, while the enormous benefits being heaped on Japan Inc. are not trickling down past the top layer and the hedge funds that invest in it.

In a toxic combination for Asia: as Japan is struggling, China is skidding. “We could see relatively strong downward pressure,” the Chinese government admitted. Read… China’s Hard Landing Suddenly Gets a Lot Rougher