Once a commodity is left for dead, things often get better.

You can’t say we didn’t warn you. You may remember rare earth producer Molycorp, the “poster child of the rare earth element” craze that swept through the investment world. Along with companies like Rare Element Resources and Avalon Rare Metals, it was the belle of the stock market ball for a stretch in 2010 and 2011.

During the heart of this boom, my colleague Matt Badiali cautioned readers to steer clear of Molycorp. The title of his essay about rare earth companies couldn’t have been more clear: “Mining Stock Investors Are About to Get Clobbered.” Two weeks ago, Molycorp filed for bankruptcy because it can’t pay its creditors. Shareholders are likely to be wiped out.

In today’s essay, I’ll show you how you can avoid suffering losses like this in the natural resource sector. But first, let’s take a closer look at what happened with Molycorp.

“Rare earth elements” is the name given to an exotic group of metals, including strange-sounding members like lanthanum and cerium. These little-known metals are crucial components of electric-car batteries, wind turbines, and advanced electronics (like your cellphone or tablet).

It’s important to realize that rare earths are commodities, too. And just like commodities, they are dependent on economics. When there’s not enough of something, the price rises… and vice versa.

Back in 2010, the Chinese held a virtual monopoly on the rare earth industry. Then they announced a reduction in the amount of rare earths they were willing to ship to other countries. The potential for a supply crunch sent the prices of rare earth metals soaring. Between 2008 and 2011, prices for some rare earths increased 20 or 30 times.

And the share prices of producers like Molycorp rocketed. Molycorp shares went from $14 and to nearly $78 in less than a year. From the bottom to the top, Molycorp shares increased more than 500%.

As the demand for these metals lessened, their prices crashed. In its annual report, Molycorp said sales prices for rare earth metals began to weaken in the second quarter of 2012 and have continued to decline ever since. Similarly, the prices of exported Chinese rare earth metals fell 48% from 2013 to 2014.

And shares of producers like Molycorp collapsed. Take a look at Molycorp’s stock chart since it went public in 2010. 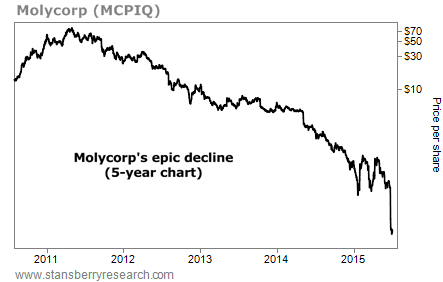 The stock has fallen nearly all the way to zero. Now, Molycorp has filed for bankruptcy because it can’t pay its creditors. And shareholders who invested during the boom in 2010 will likely lose all their money. So what’s the lesson to learn here?

If you’re going to invest in natural resources, don’t invest in a commodity sector in the middle of a “boom” stage. It helps ensure you aren’t paying nosebleed prices caused by a commodity mania.

Instead, only invest in commodity sectors that have recently been in “bust” mode. Once a commodity is left for dead, things often get better. Production drops, demand picks up, and prices eventually boom, along with the share prices of producers.

My colleague Steve Sjuggerud calls this concept “bad to less bad” trading. When things are really bad, they don’t have to get good for you to make money; they just have to get “less bad.” But to make sure your downside risk is minimized, wait for a sector to bottom and then begin moving higher.

The price movements of every commodity won’t be as exciting – or volatile – as rare earth metals, but they will peak and will eventually bottom. When they do, you can make money.

Today, lots of commodity prices are closer to the bottom than they were in 2011: Oil, natural gas, coal, and uranium all come to mind. But it’s not time to get excited yet.

When the opposite of what happened with rare earth metals since 2010 occurs – i.e., production drops (think oil, natural gas, and coal) or demand increases (think uranium) – it will make sense to buy. By Brian Weepie, Growth Stock Wire.

The greatest oil glut in history exacts its pound of flesh. Read…  Oil Falls Off the Chart, Crushes Hopes