Alberta, the province that has become the epicenter of Canada’s oil bust, does not yet have a budget for fiscal 2015-16. Premier Rachel Notley promised delivery by October. But it won’t be easy. Ideas are already floating around and are getting shot down. The problem: a budget crisis has set in after a sudden shortfall of C$7 billion in oil revenue.

There have been layoffs in the oil patch. Companies are retrenching. Home prices are tumbling in Calgary, the oil capital of Canada. In May, they plunged a record 3.3% and are now down 7% from their peak seven months ago.

In commercial real estate, it’s getting ugly. The number of transactions of C$1 million or more in the first quarter plummeted by 21%, and the dollar value of transactions dropped 11%, according to RealNet Canada, cited by the Calgary Herald.

Cushman & Wakefield reported that the premium office market in Calgary is “reeling from the sudden impact of downsizing companies.” Unless a miracle happens in the oil markets that sends prices back into the stratosphere, the premium office market will see vacancy rates climb to 12.4% by the end of this year, and to 15.4% by the end of 2016, the worst since the early 1990s. In the first quarter alone, a record 1.23 million square feet of office space were put back on the market as companies, mauled by the oil-price plunge and trying to stay alive, are slashing operating expenses where they can.

With impeccable timing, a flood of new space is being built and will soon come on the market. Bob McDougall, senior managing director of brokerage for Cushman & Wakefield in Calgary, explained:

“On top of low office demand and companies subletting record amounts of space, we’re in the midst of a major development cycle with about three million square feet under construction downtown. Right now, it’s a perfect storm.”

And this “perfect storm” has slammed into business confidence in Alberta, with a totally breathtaking force, as the Economics and Strategy group of National Bank Financial reported. Its chart of the CFIB small-business confidence index for Alberta (black line) and neighboring British Columbia (red line) shows “a record gap between the two provinces in June.”

And what a cliff dive small-business confidence has taken in Alberta over the past few months. In June, it hit the lowest level since the Financial Crisis in 2009: 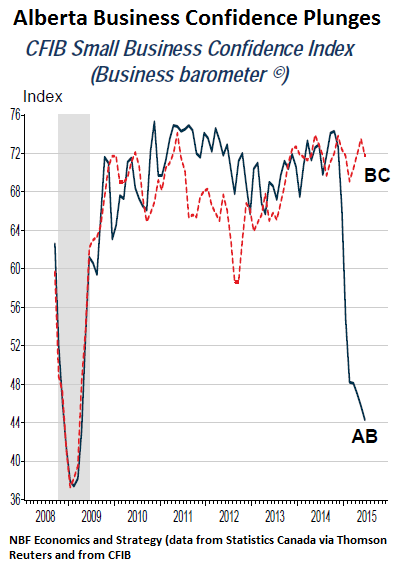 That kind of plunge in confidence is rare. The Financial Crisis was a terrifying event for businesses. And the oil bust is having a similar effect in Alberta. It speaks of the deep turmoil and anxieties in the business community that is trying to survive somehow even while the oil bust batters their business models, revenues, profits, and balance sheets. And it speaks of the myriad side effects it has on the rest of the business community, the broader economy, and government.

So in Alberta, the “difficult conditions seem set to endure for a while longer,” wrote NBF Senior Economist Marc Pinsonneault.

But the rest of Canada seems to be fine, still: “Things are actually looking up for most of the larger provinces with Ontario, Quebec, and British Columbia carrying a good amount of momentum going into H2 2015.”

All and all, the data remain consistent with our view that Alberta’s woes are not translating into a full-fledged contagion to the rest of the country. As such, we remain comfortable with our view that after a difficult start to 2015, firmer growth in Canada’s three most populous provinces is poised to offset still-mounting weakness in previously high-flying resource-levered jurisdictions.

And hopefully – the operative word – that will be the case. Because some terrific bubbles in housing and commercial real estate have bloomed into majestic maturity, particularly in Toronto and Vancouver. Household indebtedness has soared. The banks are exposed, And it wouldn’t take much of a trigger to send treacherous vibrations through the whole precarious, debt-funded construct.

“All of that negative news has kind of put a downer on consumer sentiment,” is how Jharonne Martis, director of consumer research at Thomson Reuters, explained the crummy consumer confidence reading. Read…  It Gets Messy in Canada