Evidence is piling up that the US economy is muddling through, rather than falling off a cliff.

The first quarter was bad, but the Third Estimate of first-quarter GDP, released on Wednesday, showed that it was still bad (-0.2%), but not as bad as feared after the Second Estimate (-0.7%). Data for the current quarter has been mixed, as they say, but better, pointing at the same pace of growth the economy has been experiencing for years, a frustratingly slow pace, not anywhere near the much hyped but always elusive “escape velocity.”

However, there are pronounced booms in parts of the country, including in the Bay Area and Silicon Valley. For people that participate in these booms in one way or another, it can be a thrilling experience, with money sloshing through the streets knee-deep. Elsewhere, it doesn’t look so hot, and people there still think we’re in a recession because to them, it feels like we’re in a recession – or have never left the recession behind in the first place.

Turns out, they have good reason to feel that way.

On Tuesday, I wrote about Durable Goods orders, which had been, as I said, “lousy, lousy, lousy.” But when adjusted for inflation and population growth, they’d been terrible, not just for the month, but for years, down 36.5% per-capita from their peak in 2000!

This “per capita” is closer to what we as individuals experience. I wrote, “If you have a bigger pie, but you slice it into more pieces, each piece might end up being smaller.” And many people are getting a smaller slice than they did before the Financial Crisis.

The same principle in a much broader manner applies to GDP. Doug Short at Advisor Perspectives has a great series on per-capita GDP. It sheds more light on the discussion of how this economy feels than all the hoopla from Wall Street economists put together. Here’s what that looks like on Doug’s chart (log scale) in current dollars going back to 1960: 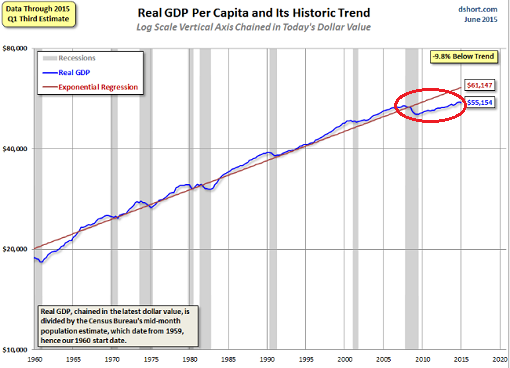 During the Financial Crisis (the big-fat gray bar), per-capita GDP fell off a cliff but then never returned to trend. In fact, the gap to the trend line has been slowly widening since. By Q1 2015, per-capita GDP was 9.8% below trend. To the left is the detail from the above chart.

The same data in more granular detail shows just how bad it has been. Per-Capita GDP, in today’s dollars (adjusted for inflation), hit a pre-Financial Crisis high of $53,807 in Q4 2007, plunged to $50,843 in Q2 2009 as the economy hit bottomed after its tailspin, then gradually began to recover. Since the US population increased as well, the real economic growth per-capita was minuscule, interrupted by a number of down-quarters: 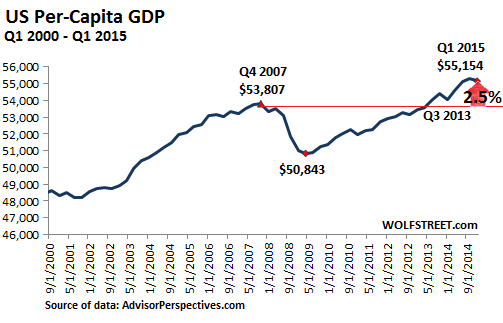 The big hole in per-capita GDP lasted from the peak of per-capita GDP in Q4 2007 all the way to Q3 2013, when it finally returned to the same level as six years earlier. By Q1 2015, it was up a measly 2.5% from where it had been in Q4 2007. But 2.5% growth spread over 8 years is a rounding error in history. And if inflation calculations underestimate actual inflation by even tiny increments every year – and that’s not such a far-fetched possibility – the whole thing turns negative.

It’s even worse for a lot of people. Much of that growth occurred in certain areas of the country and was concentrated on some sectors, such as tech or the fracking boom. In many other areas, per-capita GDP actually declined.

That 2.5% growth spread over eight years is so diminutive that a recession much smaller than the Financial Crisis may drive per-capita GDP back below where it had been in 2007. And this, after seven years of scorched-earth monetary policies that have inflated asset prices to ludicrous levels and have produced the greatest credit bubble in history, but not a heck of a lot of economic growth.

But now Wall Street has a new problem: to its greatest consternation, millennials are smart and not interested in the fare Wall Street is dishing up. Read…  Wall Street Frets about its Nightmare Generation

4 comments for “The Crucial Thing to Know About This Economy”