This is playing out perfectly, and most likely as planned. But just not for everyone.

In late 2011, private equity firms entered the single-family housing market with a vengeance, motivated by the promise of outsized profits and funded by the cheap money the Fed made available. They were doing it to make a lot of money quickly and get out. They were wildly buying vacant homes in 2012 and 2013, but already less so in 2014. Together these handful of firms bought up several hundred thousand single-family homes in a few key markets, driving up prices as they went, and then started to rent them out.

Prices have now risen so far that these large investors have curtailed their purchases as the buy-to-rent model doesn’t work at these prices. But smaller investors have pushed in behind them. Meanwhile, some of these PE firms have spun off their buy-to-rent entities into separate companies and sold their shares to the public.

Readers of WOLF STREET and of the predecessor site with the ghastly name (not to be repeated here) are very familiar with this process and what it did to the American housing market, now Housing Bubble 2.

So how well have the shares of these buy-to-rent outfits done, after the public bought them during one of the greatest bull markets of all time?

“It seemed like a good idea at the time….”

Since March 2013, its index of these companies, consisting of American Residential Properties (ARPI), Starwood Waypoint Residential Trust (SWAY), American Homes 4 Rent (AMH), and Altisource Residential (RESI), has lost about 14%, compared to a gain of 13% in the overall REIT index and a 39% jump in S&P 500.

This chart by myIRAhack.com shows just how terrible the public fared buying these shares: 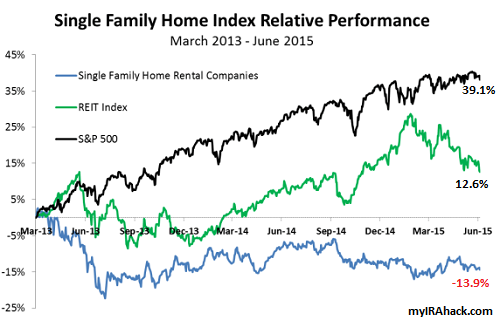 So yes, it’s playing out perfectly.

The “smart money,” funded by the Fed’s “cheap money,” succeeded in building an empire as landlords. Then they began to unload part of this empire at peak valuations to unsuspecting retail investors who either bought these shares directly or more likely unwittingly by holding mutual funds or ETFs in their nest eggs.

The financialization of the American Dream comes full circle.