As if a toggle switch had been flipped late last year, Americans suddenly gained confidence in the economy, to levels not seen since before the Financial Crisis. But now, it’s all unraveling again.

The jump in third-quarter GDP was in the news during the fall. “Escape velocity” was being reached, Wall Street soothsayers said. The price of gasoline was dropping, and people were actually able to save a little instead of spending it all, to the greatest exasperation of the same soothsayers, and to equal exasperation of politicians, corporate executives, and others.

It was a time when consumers were finally gaining back some confidence in the US economy, and they were feeling pretty good – some because their lives were on the right track and others because they got tired of feeling bad and had adjusted to their new but lower reality. They’d come a long way.

During the financial Crisis, Gallup’s Economic Confidence Index plunged to an all-time low of -65. The index is the average of how Americans see the current economic conditions and whether they think the economy is improving or getting worse. It has a theoretical maximum of +100 (everyone says the economy is “excellent” or “good” and “getting better”) and a minimum of -100 (everyone says the economy is “poor” and “getting worse.”) So -65 got pretty darn close to the theoretical minimum!

During the subsequent “green shoots” period, the index rose as high as -18 by early 2011 before re-plunging to -54 by fall that year. The debt ceiling fight, the possibility of a government shut-down, and talk of default were gracing the media. When the charade was over, economic confidence climbed out of the pit.

By mid-2013, the index was back up at (a still lousy) -3. But in the fall, it re-plunged to -39 in response to another debt-ceiling charade. This too passed. In 2014, the index meandered mostly between -21 and -14, until the end of the year when it began soaring. By early January, it hit +5, the highest since before the Financial Crisis.

But then the air hissed out of it. A week ago, the index hit -3. And for the week ending May 3, the index plunged 6 points to -9, the lowest since December and the worst weekly drop since last July: 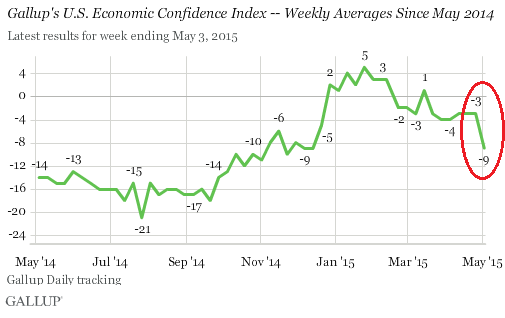 Current conditions dropped to -5, with 24% considering the economy “excellent” or “good” and 29% considering it “poor.” But economic outlook plunged 8 points, to -12, the lowest since November, with 54% of Americans saying the economy is getting worse. That’s what “dragged down” the index, as Gallup said. Suddenly, the future looks less rosy.

Gallup blamed the stock market that during the week before the survey “had been fraught with market losses.” Tiny ones, it must be said, that left stocks near their all-time highs.

Then there were the rising prices at the pump. The price of crude oil has bounced, and the seasonal upswing in gas prices is underway. Gallup determined that indeed, “confidence in the economy is related to how much they pay at the pump.”

And it blamed the ugly first-quarter GDP that surprised Wall Street soothsayers and CNBC talking heads, though it had been predicted by the Atlanta Fed and other data points that we published right here throughout the quarter [read… Atlanta Fed’s “GDP Now” Model Totally Nailed Ugly Q1, “Blue-Chip” Economists Ludicrously Optimistic].

And some of this, as Gallup writes, “may have dampened consumers’ economic hopes.”

But here is the thing: if Gallup is correct in blaming the drop in economic confidence on the slight losses in the stock market that was still near its ludicrously lofty all-time high, how are Americans going to react when stocks are once again subject to real gravity, as they’ve always eventually turned out to be?

But that will never happen; the Fed has that under control; that’s the official message. And there may be more good news coming to perk up economic confidence, including the jobs report on Friday, Gallup says. “Unless the economic news continues to be bad, Americans may soon forget about the weak first quarter GDP and rising gas prices….” Hopes – so that they can go into the summer with a confident smile.

But there may be more issues waiting to unfold because gloom has hit the shipping business. Read…  China Containerized Freight Index Plunges to Multi-Year Low, Shanghai-EU Rates Totally Collapse, US Rates Morose

16 comments for “Confidence in the US Economy Plunges”