Well, maybe Amazon is the greatest thing since sliced bread, but that doesn’t explain how it gained $25 billion of market cap overnight after reporting another loosing quarter. Give all the credit you want to its web services business—a newly disclosed but decade old operation with scads of competent competitors and which sports a modest $6 billion run rate of sales that may or may not be profitable on a fully-loaded cost basis—and it still doesn’t explain today’s buying panic.

What can’t be denied, however, is that Amazon’s first quarter red ink brought its bottom line over the last twelve months (LTM) to negative $406 million. That’s its worst result since way back in December 2001 when it posted a LTM loss of $567 million. And it marks the 18th straight quarter in which its LTM net income has been going downhill from the modest peak of $1.1 billion it posted for the four quarters ended in September 2010.

So what we apparently need to do here is reverse Wall Street’s normal admonition to value a stock based on its possible earnings next year or the year beyond, and, instead, compute a backwards looking PE multiple. To wit, the casino today is valuing Amazon at 190X the earnings it used to have 55 months ago. 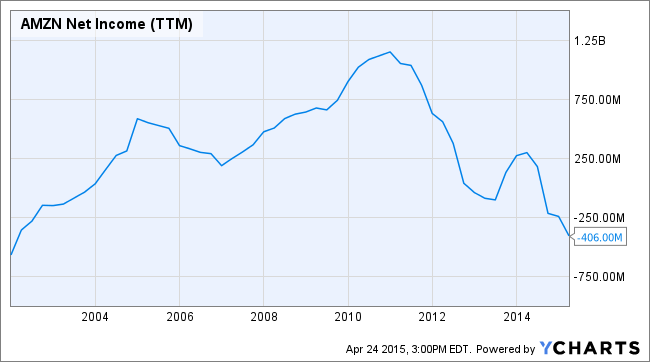 Yes, I realize that if you understand the wonders of hyper-growth you should not be troubled by the above chart because net income has nothing to do with valuation when it comes to transformative technology. But notwithstanding all the gee-wiz potential of enjoying drone delivery of charcoal briquettes to your back-yard barbecue, the overwhelming girth of AMZ’s $92 billion in sales comes from its function as a hired shopper with good ordering and fulfillment technology and a customer friendly manner.

Yet we are talking here about a prolonged sea change in the shopping function, not a transformative overnight technology revolution like the iPad or the sudden arrival of a mega-blockbuster drug on the verge of FDA approval. In those cases, the idea of generously capitalizing not yet visible but likely to emerge profits makes economic sense.

But AMZ has been conducting its sea-change of the shopping function for nearly two decades now—during which time it has slowly turned the world of books and consumer products distribution upside down. But it has been a nearly profitless evolution. During the last 10 years, its cumulative net income has been just $4 billion.

During the same period, its cumulative sales were a whopping $300 billion. I am sorry. You can’t deliver one-third of a trillion dollars worth of books, diapers and dog food, yet make hardly a hairline profit. Well, not while still being valued at $207 billion. In an honest free market, Jeff Bezos would have been told to put up (some profits) or shut up long ago.

And you can’t explain Amazon’s ludicrous market cap by switching the metric away from net income, either. In its press release, the company’s top paragraph is all about improvement in free cash flow, which happened to come in at $3.2 billion on a LTM basis.

OK, give Amazon credit for trying to change the metric—especially since accounting income ex-items is the dubious specialty of the casino. But still, why would you value a 25 year-old company in the warehouse and trucking business at 65X free cash flow?

And besides that, it is not even clear that AMZ can consistently produce free cash flow. It trumpeted its current LTM figure as a 112% improvement from the March 2014 LTM figure, but failed to include the chart below. Namely, that last year’s LTM number came at the bottom of a deep swoon. 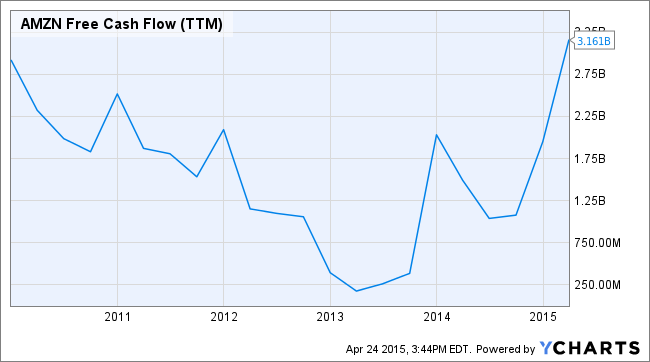 At the end of the day, there is nothing in Amazon’s financials or even its business model “stories” which warrant a $207 billion valuation. And especially not based on the idea that if he wanted to, Bezos could hit the “profit button” and instantly and dramatically improve the company’s bottom line and thereby justify its massive valuation.

No he can’t. AMZ has become a runaway spending machine. Thus its operating expense in the LTM period was $92 billion or nearly $30 billion more than the LTM period ending just two years ago in March 2013. AMZ is frantically throwing money at thousands of initiatives, offerings, diversifications and dreams and, self-evidently, has no idea about whether they are profitable on a fully loaded sustainable basis.

Maybe one hour delivery of room freshener and automatic replenishment of your coffee beans is the next big thing. But maybe consumer demand at a profitable price would prove to be not all that bountiful and that competition would prove to be more than non-existent.

Here’s the thing. In an honest free market after two decades of “profits mañana” the proposition would be the inverse. Namely, if you want a big market cap, post some regular way profits today and invest in future “growth” in a disciplined and measured way.

So if you want evidence that we have had a regime change—that is, that the money printing madness of the central banks has turned the financial markets into manic gambling casinos—look no further than today’s $25 billion punt on AMZ.

During the last decade AMZ’s market cap has increased by 15X and its sales have grown by 12X. But its profits have shifted from net income of $500 million in 2005 to the LTM loss of $400 million posted last night.

That’s evidence of a financial mania no matter how you slice it. 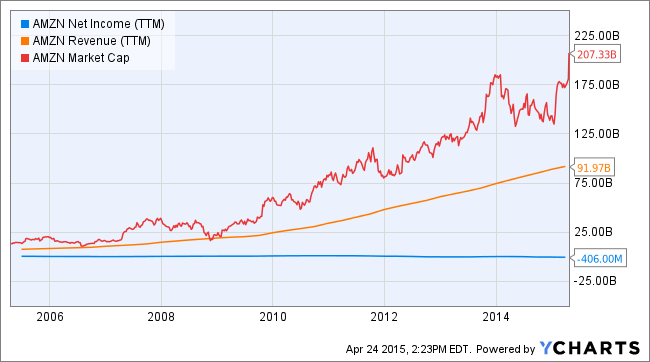 Needless to say, the Wall Street gamblers have plenty of company all over the world. As Zero Hedge posted last night, the number of new A-Share accounts opened in China just last week was a mind-boggling 3.25 million!!! That is double the number opened in the peak euphoria stage of the 2007 bubble.

With credit market debt having grown from $2 trillion in 2000 to $28 trillion today, it is perhaps understandable why China has an affinity for leveraged speculation. What is not understandable is why Wall Street economists and strategists think China’s insane stock market is only slightly over-bought!

The fact remains that the central banks of the world have so thoroughly destroyed honest price discovery that stock markets everywhere are in thrall to just plan irrational speculation. This week the dip-buyers were back in the US markets trying to paint the tape at new all time highs just as they have each and every time after eight minor corrections since the 2009 bottom.

But the chart below makes the growing danger self-evident. Each dip is shallower. The coiled spring of speculation is becoming wound ever tighter.

When it blows there will be nothing below. Not the least $206 billion of AMZ hopium. By David Stockman, David Stockman’s Contra Corner

So central banks have succeeded in generating a planet-wide mania. Read…  The World’s Financial System Is Going Nuts

5 comments for “Financial Mania Strikes Back”