The calamity howlers of deflation are out in force this morning owing to an absolute economic non sequitur. Namely, that year-on-year consumer prices in the EU came in at negative 0.2% in December, implying that ECB printing presses need to go into immediate overdrive.

Well, of course the CPI has momentarily weakened. Crude oil has experienced a monumental plunge of more than 50% since mid-2014. That has temporarily dragged down the euro zone’s reported CPI and the math isn’t all that complex. During the last 12 months,  euro zone energy prices have fallen by 6.3%, and everything else is still 0.6% higher than a year ago.

So what’s the emergency? This is the very same CPI blip that occurred when oil collapsed in the second half of 2008. As is evident below, that episode did not generate some cascading plunge into economic darkness. In fact, the Eurozone CPI was back running above 2.5% in no time.

The truth of the matter is that the EU-19 is in clover because its consumers get a big break; and, on the other side of the economic equation, it produces almost no oil. Europe’s production is mainly in the UK and Norway and they have their own currencies. Accordingly, the ECB should be putting its printing presses on an extended sabbatical and declaring victory on the achievement of its “price stability” objective.

Indeed, the notion that the hairline puncture of the zero inflation line shown above is a precursor of a deflationary calamity amounts to economic voodoo. There has been no structural change whatsoever in the Eurozone economy since 2008 when the last oil-driven CPI drop occurred, and therefore no empirical basis for the notion that wages and prices are about to descend into an accelerating downward spiral. If anything Brussels’s dirigisme regime has made prices and wages even more “rigid” and “sticky” owing to it’s avalanche of new regulations, subsidies and other economic interventions.

The plain fact is that the euro zone like the rest of the DM has an inflationary bias that is embedded in six decades of history during which the euro and its predecessor currencies lost purchasing power month-in-and-month-out. So households are finally getting what will undoubtedly be a short respite from the inflation tax, but that is the extent of it. There is not one rational reason to believe that the relentless upward march of the price level shown below will not presently resume its well-worn path.

The euro zone deflation story is pure cock and bull, and that proposition doesn’t take much investigation to document. First and foremost, there is no sign of a wage collapse, yet how do you get a deflationary spiral if wages continue to rise?

As shown below, owing to heavy unionization and protectionist labor laws, euro zone wage rates have been on a long-running one-way escalator, and show no sign of “deflation”. Total compensation per worker is up 1.3% during the last twelve months – an identical rate to the 1.3% recorded during the year before that, and not much below the 1.7% annual rate of gain that has been recorded since mid-2010.

If you take purely euro zone produced items the story is the same. In the case of total services, the December LTM price change is 1.25%, a figure that has been visited twice before this century without untoward effects. 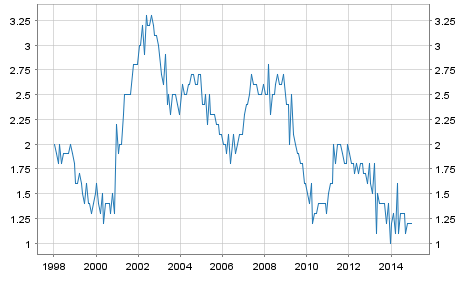 In the specific case of housing services and rentals, the LTM inflation rate is not much under 2%, a level which has prevailed for the past several years. 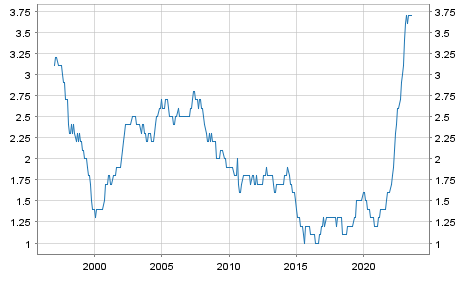 Likewise, the inflation rate for euro zone produced recreation and personal services shows no signs of plunging into the abyss. It’s LTM rate of increase is about 1.5%, and is in the general zone that has prevailed for most of this century. 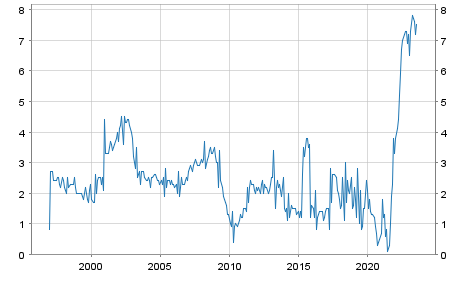 The same is true of transport services. The index is still rising at a 1.5% rate, and while below the 2.5% trend of the last decade or so, the larger point is self-evident. Isn’t it a good thing for productivity and growth that the euro zone’s inflation rate for transport of people and goods is abating slightly? Where’s the fire? 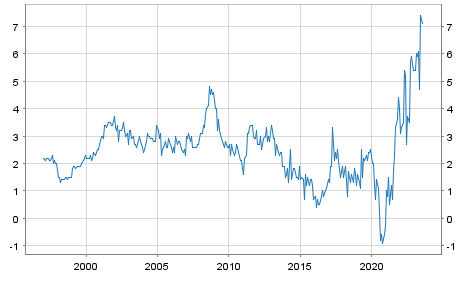 In short, the euro zone’s momentary spat of year-over-year price stability is almost entirely owing to the global decline of commodities since the China bubble driven peaks of 2012; and also the lagged effect of the euro’s strength prior to mid-2014.

In the case of non-food commodities including energy, for example, the producer price index is down about 25% from it 2011/12 peak. Since the euro zone imports a heavy share of its energy and industrial commodities, isn’t this decline a welcome development?

And there’s more. Commodity prices are still double their pre-2005 level. In other words, the giant global commodity bubble generated by the runaway credit boom in China, the BRICs and their EM satellites has finally started to cool, and this relief is now washing through the euro zone price indices. Rather than an existential crisis, the cooling of euro zone inflation is mainly a welcome surcease from the utterly aberrational credit bubble that was foisted on the global economy by central banks over the past decade.

Even in the case of food commodities, the sharp decline since 2012 is a menace only to the French farmers, at worst. How can it be said that a 20% reduction in food costs is harming the living standard of 350 million euro zone consumers or is a causing the macro-economy’s chronic underperformance?

Finally, where prices are falling outside of imports, commodities and the processed industrial goods which embody them, this result has nothing to do with short-term monetary policy. The price index for euro zone communications services, for example, is negative 2.5% on an LTM basis, but that is nothing new. Owing to the communications technology revolution and a modest degree of deregulation, prices in this sector have been falling for the better part of two decades, and its been a boon for economic growth and consumer welfare, too. 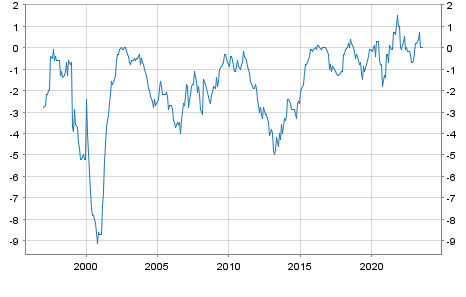 In short, the euro zone deflation scare has nothing to do with empirical reality or common sense economics. Instead, it is pure propaganda emanating from the policy apparatchiks in Frankfurt and Brussels, and aped and amplified by the casino’s stock peddlers who claim to be “economists” and “strategists”.

So right on schedule comes this blithering nonsense from one James Ashley, purportedly an economist at RBS Capital Markets:

“The emergence of negative inflation does forcefully raise the specter of a possible prolonged period of deflation,” said James Ashley, an economist at RBC Capital Markets. “In other words, for those policy makers who, hitherto, might have been undecided over whether or not to take further action immediately, this may be just the clarion call that was required to appreciate the gravity of the situation.”

That’s right. A single month of hairline negative inflation is a “clarion call” no less – calling for the ECB to damn the monetary torpedoes. Could it be the RBC has been busy putting its clients and its own prop funds in Italian, Spanish, Portuguese and Greek bonds on the predicate that a big fat Italian bid would be forthcoming from the ECB?

At the end of the day it is quite simple. The Keynesian central bankers running the world have more power than any other rulers in human history. They are now drunk with it, and have consequently embraced self-serving propositions for which there is no empirical evidence whatsoever.

Nowhere is there proof that 2% inflation is better for economic growth and societal living standards than 1% or 0% or negative 0.2%. Nowhere is it written in the treaties and documents that the ECB’s “price stability” mandate requires exactly a 2% annual gain in the CPI – and especially no less, even for a few transient months.

It’s all just invented from whole cloth, and recently at that, and has now been repeated so relentlessly by central bankers and the mainstream financial media that it amounts to ritual incantation.  Thus, one of the single most dangerous man in the world, Mario Draghi, recently repeated the going canard without missing a beat.

“If inflation remains low for a long time, people might expect prices to fall even further and postpone their spending,” ECB President Mario Draghi warned in a newspaper interview published last week.

There is not a shred of evidence to document that the 90% of households which have been left behind during our central bank driven era of massive financial asset inflation will delay purchases of necessities, needs or even foibles for one moment on the off-chance that prices might be lower next month or year. Its the Big Lie that suits the handful of monetary central planners who run the world financial system, and the thousands of speculators and gamblers who scalp fortunes from their ruinous actions.

Yes, the euro zone has a growth and jobs problem just like most of the DM including the United States. But the problem is not that inflation is too low. Instead, everywhere the state – including its central banking branch – is destroying the essential machinery of free market capitalism through burdensome regulation, taxation, penalties for thrift and savings, and, most especially, the vast diversion of capital, technology and human resources into the greatest gambling dens the world has ever known.

So, alas, there is a case for calamity howling. But it has nothing to do with today’s random recording of 0.2% negative inflation in the euro zone. By David Stockman, Budget Director under President Reagan and author of The Great Deformation: The Corruption of Capitalism in America. This article originally appeared on David Stockman’s Contra Corner.

In the US, the Fed’s “No Banker Left Behind” Program has had a very special effect. Read…   The Greater Abomination: Washington’s Lies About TARP’s “Success” Are Worse Than The Original Bailouts