Friday, natural gas futures plunged 6%. Monday morning, when folks were thinking about the beautiful Santa Rally, NG futures plunged nearly 10% to $3.12 per million Btu, the lowest since January 10, 2013. But the crazy day had just begun. NG bounced off and jumped nearly 4%, only to give up much of it later. Tuesday morning, as I’m finishing this up, NG continues to decline, now at $3.11/mmBtu. Down 30% from a month ago.

NG demand peaks when the heating season starts. It’s a bet on the weather. Our gurus forecast warmer than normal temperatures across the country, so prices plunged. Or shorts piled into the pre-holiday session with exaggerated effect to make a quick buck. 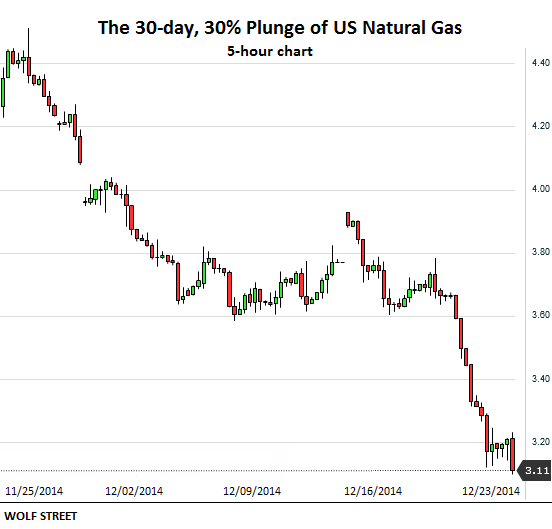 To make the equation work, drillers have shifted from shale formations that produce mostly “dry” natural gas to formations that also produce a lot of liquids, such as oil, natural gasoline, propane, butane, or ethane that were fetching a much higher price. Thus, they’d be immune to the low price of NG. They pitched this strategy to investors to attract ever more money and keep the fracking treadmill going.

Much of this new money was in form of junk debt. Now energy companies account for over 15% of the Barclays U.S. Corporate High-Yield Bond Index – up from less than 5% in 2005.

It’s showing up everywhere. Take Samson Resources. As is typical in that space, there is a Wall Street angle to it. One of the largest closely-held exploration and production companies, Samson was acquired for $7.2 billion in 2011 by private-equity firms KKR, Itochu Corp., Crestview Partners, and NGP Energy Capital Management. They ponied up $4.1 billion. For the rest of the acquisition costs, they loaded up the company with $3.6 billion in new debt. In addition to the interest expense on this debt, Samson is paying “management fees” to these PE firms, starting at $20 million per year and increasing by 5% every year.

KKR is famous for leading the largest LBO in history in 2007 at the cusp of the Financial Crisis. The buyout of a Texas utility, now called Energy Future Holdings Corp., was a bet that NG prices would rise forevermore, thus giving the coal-focused utility a leg up. But NG prices soon collapsed. And in April 2014, the company filed for bankruptcy.

Now KKR is stuck with Samson. Being focused on NG, the company is another bet that NG prices would rise forevermore. But in 2011, they went on to collapse further. In 2014 through September, the company lost $471 million, the Wall Street Journal reported, bringing the total loss since acquisition to over $3 billion. This is what happens when the cost of production exceeds the price of NG for years.

Samson has used up almost all of its available credit. In order to stay afloat a while longer, it is selling off a good part of its oil-and-gas fields in Oklahoma, North Dakota, Wyoming, and Colorado. It’s shedding workers. Production will decline with the asset sales – the reverse of what investors in its bonds had been promised.

The collapse of oil and gas prices hasn’t rubbed off on the enthusiasm that PE firms portray in order to attract new money from pension funds and the like. “We see this as a real opportunity,” explained KKR co-founder Henry Kravis at a conference in November.

KKR, Apollo Global Management, Carlyle, Warburg Pincus, Blackstone and many other PE firms traipsed all over the oil patch, buying or investing in E&P companies, stripping out whatever equity was in them, and loading them up with piles of what was not long ago very cheap junk bonds and even more toxic leveraged loans.This is how Wall Street fired up the fracking boom.

PE firms gathered over $100 billion in their energy funds since 2011. The nine publicly traded E&P companies that represent the largest holdings have cost PE firms at least $12.7 billion, the Wall Street Journal figured. This doesn’t include their losses on the smaller holdings. Nor does it include losses from companies like Samson that are not publicly traded. And it doesn’t include losses pocketed by bondholders and leveraged loan holders or all the millions of stockholders out there.

Undeterred, Blackstone is raising its second energy-focused fund; it has a $4.5 billion target, Bloomberg reported. The plunge in oil and gas prices “has not created a lot of difficulties for us,” CEO Schwarzman explained at a conference on December 10. KKR’s Kravis said at the same conference that he welcomed the collapse as an opportunity. Carlyle co-CEO Rubenstein expected the next 5 to 10 years to be “one of the greatest times” to invest in the oil patch.

“If you have an asset you already own, it’s probably going to go down in value,” Rubenstein admitted. But if you’ve got money to invest, in Carlyle’s case about $7 billion, “it’s a great time to buy.” They all agree: opportunities will be bountiful for those folks who refused to believe the hype about fracking over the past few years and who haven’t sunk their money into energy companies. Or those who got out in time.

Not for a while, says Oaktree Capital, the world’s biggest distressed-debt investor. Co-chairman Howard Marks told clients in a December 18 letter, obtained by Bloomberg, that the plunge in oil and gas prices could trigger a new debt crisis.

“We knew great buying opportunities wouldn’t arrive until a negative ‘igniter’ caused the tide to go out, exposing the debt’s weaknesses,” he wrote. “The current oil crisis is an example of something with the potential to grow into that role.”

Last time that “negative igniter,” as Marks calls it, was housing. Once the effects began cascading to other sectors, it blew up the financial system. This time, the “negative igniter” could be the outgrowth of the shale revolution. And as was the case before the housing collapse, financial firms are already lining up to profit from it.

The Fed giveth, the Fed taketh away. What’s going to crash next? Read… Oil Price Crash Triggered by the Fed? Amazing Chart