Correlation is not causation. Just because two things occur at the same time doesn’t mean that one causes the other. I get that.

But when the Fed buys $3.6 trillion in assets with freshly created money, and when it represses the cost of capital for Wall Street to zero for a six-year period, and when other central banks follow with similar policies, well then, something is going to be impacted.

As we now know, it wasn’t consumer prices – though that may still come. It was asset prices.

For the longest time, soothsayers on Wall Street denied that this free money sloshing through the system could possibly drive up stocks, bonds, and other assets to ludicrous heights. Instead, their newfangled forward-looking metrics showed that it was truly different this time. When someone had the temerity to overlay a chart of the soaring S&P 500 and the soaring balance sheet of the Fed, the soothsayers screamed, “Correlation is not causation.” Stocks were soaring on their own glorious merits, they claimed.

No matter that Fed Chairman Ben Bernanke had explained his wealth effect in an editorial in 2010. The Fed’s “strong and creative measures” – as he called QE and ZIRP – will goose stock prices. “And higher stock prices will boost consumer wealth and help increase confidence, which can also spur spending. Increased spending will lead to higher incomes and profits that, in a virtuous circle, will further support economic expansion.”

These “strong and creative measures” worked: people who had a lot of money to invest benefited from it. Rising asset prices bailed out banks, TARP, Warren Buffett, GE, and so on. Savers where ritually sacrificed at the altar dedicated to Wall Street. It worked even in economies that continue to be in terrible shape. Not the wealth effect, of course. It never worked anywhere; but asset price inflation.

I have written extensively about the oil-price plunge, and the various causes ascribed to it, the booming production in the US coinciding with global demand growth that wasn’t living up to rip-roaring projections but instead was pretty crummy; or Saudi Arabia’s explicit desire to hammer the US shale revolution back into its place [here is my series of articles…  The Oil Bust].

But could the Fed have triggered the run-up in oil prices and the subsequent crash? Take a look: 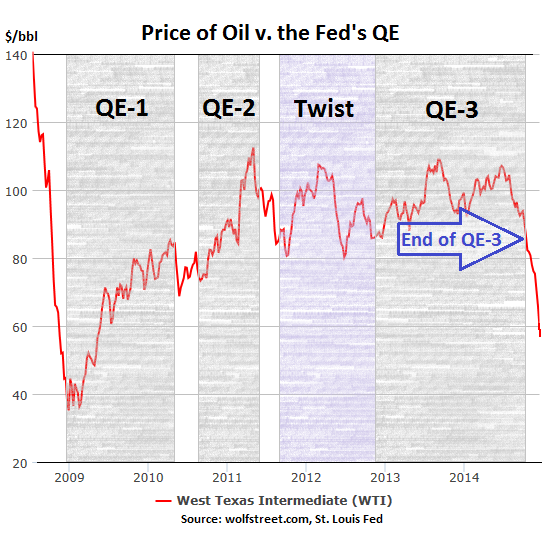 QE-1 began in late November 2008. It stopped the oil-price crash in its tracks. In mid-February 2009, West Texas Intermediate (WTI) still traded for $35 per barrel, but then began to move – three weeks before the S&P 500 bounced off its low. Around the time QE-1 ended, it lost its footing, but then re-soared as QE-2 kicked in, peaking in late April 2011, just before QE-2 ended. It had soared 222% in a little over two years.

But with the end of QE-2, the price of oil headed south, diving 30% five months. The Fed got nervous and started Operation Twist. Oil re-soared, but after the initial excitement, oil lost it all again. Operation Twist wasn’t strong enough.

The Fed panicked and unleashed QE-3, bigger and wilder than anything before, and without an expiration date. It triggered phenomenal asset price inflation in stocks, bonds, art, and a million other things – but not oil.

Oil never made it back to its April 2011 post-crisis high and remained far from its all-time high. The effectiveness of the Fed’s “strong and creative measures” was waning with regards to oil. Unlike financial assets, oil faces the harsh reality of dwindling demand when it gets too expensive.

Oil was sitting at $107 per barrel in late June this year as QE-3 was being tapered out of existence. There was a self-satisfied calm in the oil markets. Oil was perfectly priced, high enough for mega-profits but not so high that it would strangle the world economy. Junk bonds to fund fracking and off-shore drilling were selling at record low yields. Nothing could go wrong.

Than oil crashed. And the crash accelerated with the official end of QE-3 in October.

OK, correlation isn’t causation. But the Fed had published its plan to drive up asset prices. Oil was just one asset that had soared during the various phases of QE and dropped in between. As QE came to an end, it crashed 45%. And it remains uncertain how much further it might fall. Energy stocks and junk bonds are on a similar trajectory. Other junk bonds and leveraged loans have started to follow. What’s next?

A lot of money is still being printed in the world, and ZIRP prevails. In some places, negative-interest-rate policies have taken over. Many markets are drowning in liquidity. But this liquidity is the hot money. It’s borrowed money that can evaporate without a trace from entire sectors or countries. And if oil is a harbinger of what happens when the hot money departs, we will have truly interesting times ahead of us.

Last week, WTI fell below $54 per barrel, though it has since bounced off. Over-indebted energy companies with demolished cash flows are contemplating the abyss. The junk bonds they issued with enormous hoopla and hype have swooned. Yields have spiked. And damage spreads. Read… Great Unwind of Oil-and-Gas Junk Bonds to Defund Fracking?