Yesterday, I discussed how the plunging price of oil is wreaking havoc on leveraged loans in the energy sector. These loans are issued by junk-rated corporations already burdened by a large amount of debt. Banks that originate these loans can retain them on their balance sheets or sell them in various creative ways, including by repackaging them into synthetic structured securities, called Collateralized Loan Obligations.

Earlier today, I discussed how the current generation of leveraged loans in general compares to the leveraged loans issued at the cusp of the Financial Crisis. Spoiler alert: by almost every metric, they’re bigger and crappier now than they were in 2007 [read… Treasury Warns Congress (and Investors): This Financial Creature Could Sink the System].

The US dollar Libor rate is about 0.1%, so yields jumped from 5.1% in August to 7.4% in the latest week. An exponential increase: 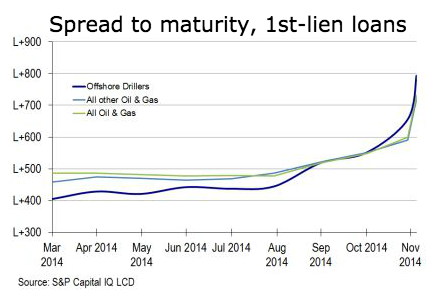 Note how offshore drillers (blue line) got hammered the most, though they had the lowest yields of the bunch for most of the year. Their spreads nearly doubled from 400 basis points over Libor in March to nearly 800 basis points over Libor last week. That’s a move from about 4% in March to nearly 8% now, and a big part of it within a single month. It’s really brutal out there.

In the oil and gas sector, revenues are already plunging. Earnings will get hit. Earnings estimates are crashing at a rate not seen since crisis year 2009. Liquidity is drying up. And stocks got eviscerated. It’s tough out there. Read…  Oil and Gas Bloodbath Spreads to Junk Bonds, Leveraged Loans. Defaults Next