The Central Bank Madmen Are Raging

Yet overnight two central banks promised what amounts to more monetary heroin and, presto, the S&P 500 index jerked up to 2070. That is, the robo-traders inflated the PE multiple for S&P’s basket of US-based global companies to a nose bleed 20X their reported LTM earnings.

And those earnings surely embody a high water mark in a world where Japan is going down for the count, China’s house of cards is truly collapsing, Europe is plunging into a triple dip and Wall Street’s spurious claim that 3% “escape velocity” has finally arrived in the US is soon to be discredited for the 5th year running. So it goes without saying that if “price discovery” actually existed in the Wall Street casino, the capitalization rate on these blatantly engineered earnings (i.e. inflated EPS owing to massive buybacks) would be decidedly less exuberant.

In truth, nothing has changed about the precarious state of the world since yesterday. Except….. except the Great Bloviator at the ECB made another fatuous and undeliverable promise—- this time that he would do whatever he “must to raise inflation and inflation expectations as fast as possible”; and, at nearly the same hour, the desperate comrades in Beijing administered another sharp poke in the eye to China’s savers by lowering the deposit rate to by 25 bps to 2.75%.

Let’s see. Can it possibly be true that European growth is faltering because it does not have enough inflation? Or that China’s fantastic borrowing and building boom is cooling rapidly because the People Bank of China (PBOC) has been too stingy?

The answer is not on your life, of course.  So why would stocks soar based on two overnight announcements that can not possibly alleviate Europe’s slide into recession or the collapse of China’s out-of-control investment and construction bubble?

It can’t be a case of debatable data. Europe’s real GDP is no higher today than it was in the third quarter of 2006. Self-evidently, the temporary slowdown in consumer inflation during recent months owing to plunging oil prices and the transient impact of exchange rates cannot explain this long-standing trend of going nowhere.

Indeed, during this same period, Europe’s CPI is has risen by nearly 20%. Where is it written or proven that an average of 2% annual inflation causes economic growth to grind to a halt? There is not a shred of evidence for that proposition—so Draghi’s pledge to restore 2%/year shrinkage in the value of the wages and bank accounts of European households cannot mean more growth, more profits and more S&P market cap.

In fact, the whole clamor about “deflation” and Draghi’s overnight pledge to do whatever it takes to get inflation rising quickly has to do with a transient blip in the price index during the last 12-18 months. But this the first time that a shift in the global commodity cycle and the euro exchange rate has caused a temporary dip in short-run consumer price trends? The historic data indicate a resounding no.

In fact,the only manner in which weakening inflation could possibly impact short-run real GDP growth is if consumers sharply raised their savings rate, waiting for lower prices tomorrow. This is the hackneyed claim of the Keynesian money printers, of course, but where’s the evidence? After a temporary surge in Europe’s personal savings rate during the Great Depression, it has regressed to its recent historical average, and has remained on the flat line, even as inflation rates have decelerated since 2012.

No, the problem in Europe is not too little inflation in the short-run; it is staggering levels of taxes, public debt and interventionist dirigisme that represents a permanent, debilitating barrier to growth. Draghi already has driven deposit rates through the zero bound at the ECB deposit facility, and now its spreading rapidly through the banking system to businesses and consumers. Precisely who will finance this soaring mountain of public debt at negative real returns when the fast money is flushed out of the ECB’s now plummeting euro?

Likewise, last night”s signal from China was a warning to take cover, not get all giddy in the casino. The People’s Printing Press of China has been on a rampage for this entire century, and has expanded its balance sheet by an incredible 9X since the year 2000. Now, even its masters of red capitalism in Beijing know this has fueled fantastic levels of over-building, over-investment and mind-boggling real estate speculation throughout the land. The fact that they have had to once again open the monetary spigot is evidence that China’s addiction to the printing press is terminal, and that a hard landing is only a matter of time.

The real trajectory in China is tracked by the canary in the iron ore pit. Like almost everything else, its iron and steel industry is massively overbuilt. It has 1.1 billion tons of capacity but in the order of 600 billion tons of sustainable demand. Stated differently, China’s excess steel capacity is greater than the combined output of the US, Japan, and the EC combined. Accordingly, when its real estate and construction bubble finally collapses, the world market will be inundated with cheap steel and every manner of goods made from it, including automobiles. During the current year alone, China will export more steel than the US industry will produce. 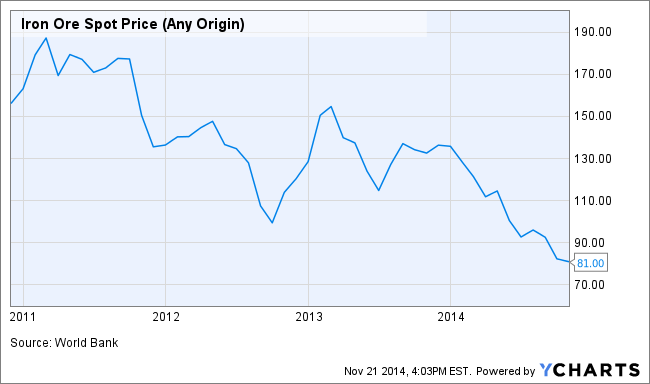 In short, there is a tidal wave of industrial deflation coming owing to two decades of world-wide central bank financial repression. That, in turn, will trigger a race to the bottom by central banks—a race that is already underway owing to Japan’s Hollowing Massacre of the yen. Soon the rest of East Asia—and especially China— will have to join the plunge or find their export based economies hitting the shoals.

Then will come more desperate maneuvers from the ECB, as even the German export machine falters in the face of collapsing growth in China and competitive devaluation all around the world. Stated differently, last night’s central bank announcements were the starting gun for a monetary implosion that will soon shock financial markets and real production, trade, employment and incomes on a world-wide basis.

Someone should reprogram the algos. Otherwise, one of these days they will snatch a headline which says sell, sell, sell. By David Stockman, David Stockman’s Contra Corner.

And it is only a matter of time before the boom in auto junk loans implodes under the pressure of rising default rates. Read… The Next Auto Subprime Bust