Italy is a country of entrepreneurs and of vibrant small enterprises. Or was. Now these businesses are dying.

Of its 5.3 million companies (as of December 31, 2013), 3.3 million are small, often family-owned outfits, according to Rome-based credit information provider Cerved Group. And another 900,000 are sole proprietorships, or 17% of all companies, a larger percentage than anywhere else in the EU, ahead of France (12%), Spain (10%), and Germany (10%). The remaining 1 million companies are corporations of all sizes.

And life in Italy has been exceedingly tough for small outfits.

Consumer spending has dropped sharply since the onset of the crisis. Industrial production continued its downward spiral in September and is down 0.5% for the first nine months of 2014 over the same period a year ago. Unemployment is 12.6%, and rising. Youth unemployment is at a catastrophic 43%, up from an already terrible 26% in 2010.

It doesn’t help that the government refuses, and I mean refuses – due to “technical” problems, as a minister explained – to pay its long overdue bills to these already strung-out businesses. It’s a shell game to lower Italy’s overall indebtedness and thus pacify the financial markets and Italy’s masters in Brussels [Italy “Would Love To” But Can’t Pay Its Bills This Year].

So this shouldn’t come as a surprise, given that the largest customer in the country, the government, refuses to pay its bills to the members of the private sector which then can’t pay their own bills: in September, non-performing loans held by Italian banks jumped 19.7% from a year ago, according to the Bank of Italy. At the same time, loans to the private sector dropped 2.3%.

Economic “growth” has been negative or zero for the last 13 quarters. And this is what Italy’s glorious “recovery” from hell looks like: 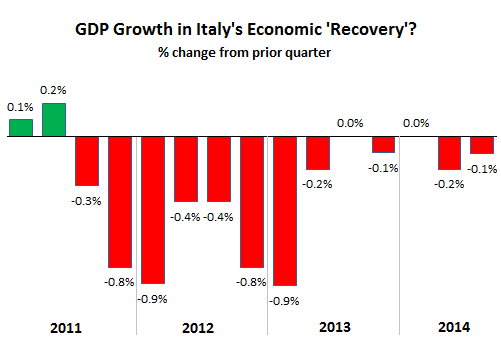 Businesses have had a hard time in this environment. In the third quarter, the number of businesses created dropped to 72,800 the lowest for that period on record, going back to 2005, according to Unioncamere, the umbrella group of the Italian Chambers of Commerce. And 56,400 businesses collapsed or disappeared for other reasons.

But the real fiasco is playing out among the smallest companies. In Q3 2007, before the crisis tore into Italy, nearly 30,000 of them were created, while nearly 24,000 went out of business. OK, being an entrepreneur is risky and failure is common. But these small businesses are part of the economic engine in Italy. In Q3 this year, only 17,800 were created, down a staggering 40% from 2007.

The chart below, which compares business creations and destructions in Q3 of each year, shows how terrible that trend has been for small businesses: 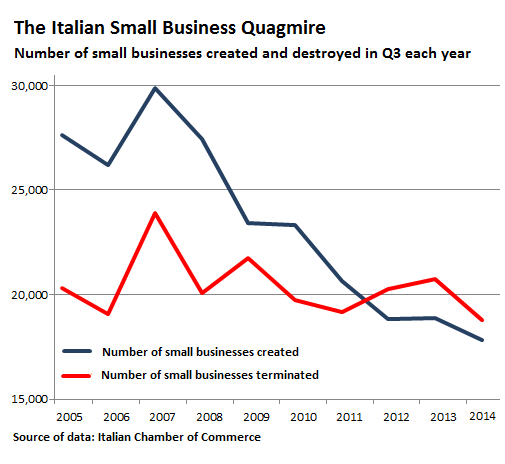 Net creation and destruction of businesses started to skew the wrong way during the financial crisis in 2009, and instead of recovering, it got worse, with fewer and fewer businesses being created. And so for Q3 of the last three years, creation of these businesses has fallen below the number of business creations – resulting in net destruction of what is supposed to propel the economy forward: 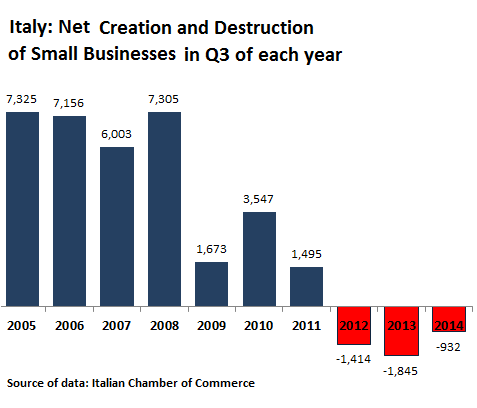 And the survivors? 24,000 companies with sales between €2 million and €50 million are at “high risk” of defaulting within a year, according to Cerved. By comparison, between 2008 and the first half of 2014, fewer than 19,000 similar-sized companies commenced default procedures.

Daniele, an Italian entrepreneur who has been struggling for years with all the issues of building a business in Italy, wrote this in his eloquent and humorous commentary, “We, the Savvy Italians….”:

In the early 2000s, a new spending trend set foot in Italy: “Buy everything now and pay when you want.” In 2014, the middle class here is much more impoverished than it was 15 years ago. And if that wasn’t enough, since our government isn’t really capable of cutting down expenses and lowering taxes, we had many industries that moved to Asia, and we lost jobs.

With a lower base we have seen a gradual lift in taxes. And at the time when Italy was having trouble refinancing its debt, our government introduced taxes on properties and bank accounts. So, we, the savvy Italians, are paying heavy for our government failures: we have a 22% VAT, a 37% minimum revenue tax, 75% taxes on oil products…. I have calculated that in my case I pay more or less 67% of my income in taxes.

No, we are not in a rosy situation here. But as an entrepreneur I know many businesspeople; people here are eager to start something new but can’t because we are crushed by our country’s debt. If finally we could have somebody with a brain in our government, this country would bloom again.

Daniele’s words portray better than anything else what is happening on the ground in Italy to generate these ghastly economic statistics and charts. We wish him the best in his struggle.

“Punishment Interest” is what the new phenomenon is lovingly called in Germany, whose savers the ECB intends to flog until their mood improves. Read… The Wrath of Draghi: First German Bank Hits Savers with ‘Negative Interest Rates’