Oil prices have plunged, in reaction to a slew of factors that have finally come together: the “shale revolution” that led to an oil (and gas) production boom in the US and Canada; a separate tar-sands boom in Canada whose only export customer is the US due to infrastructure constraints; iffy demand in China and other emerging economies; declining demand in Europe and Japan….

Add to that an apparent strategic goal by Saudi Arabia to do some real bloodletting among its competitors, namely the exuberant shale-oil drillers in the US and the tar-sands operators in Canada. For years, they’ve been eating Saudi Arabia’s lunch with gusto. It would be time to take that lunch away from them and put the hurt to them via big price cuts [read… The Major Threat to Some of the Largest Oil Producers].

It worked: the hurt is spreading. But not necessarily in the right direction, if stock markets are a measure of pain.

The US straddles the fence as the world’s largest oil-and-gas producer and one of the largest importers, but whose imports have continued to drop. OK, US energy stocks have gotten hit, but overall, stocks are at a flaming record. In Q3 to date, the S&P 500 marked a 4.8% gain.

Stock markets in oil importing countries have jumped too: Hong Kong, Turkey, China, and India are the stars of the chart below, though they don’t quite measure up to Japan, which topped off the mix with a gain of 7.2%. The plunging price of oil (and of LNG, which is tied to the price of oil) in some of those countries might have been only part of the equation. Another factor was the more-QE announcement by the Bank of Japandemonium.

But even sizzling QE hopes and lower energy prices in the Eurozone couldn’t keep Europe entirely out of the red, with France in trouble and Germany wilting.

Oil producing countries have gotten slammed. And look who’s so prominent in this elect group…. So far this quarter, Nigeria, Africa’s largest oil producer, saw its stocks get whacked down by 18.3%, followed by Kazakhstan, Saudi Arabia (-10%!), and Dubai. They’re among the worst 10 stock markets of the 93 that Bloomberg monitors.

However carefully Saudi Arabia might have aimed at the US and Canada and their prolific oil producers, it seems its first shot, which so shook up the markets, hit its own foot. 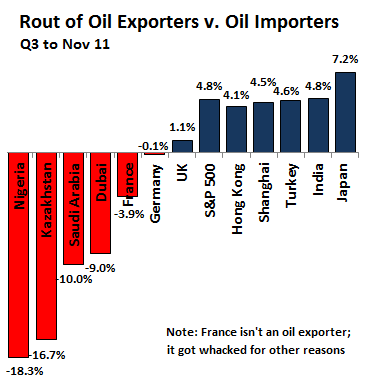 But in this shifting balance of power, there’s another factor. Read… Oil Price Collapse Ricochets Around the World, Hits US Drillers, the Ruble … and Russia’s Probability of Default

11 comments for “Saudi Arabia Aims at US Fracking Industry, Hits Its Own Foot”