With impeccable timing – on Halloween, which is increasingly popular in Japan among adults who are trying to escape their reality – Bank of Japan Governor Haruhiko Kuroda formally announced that he’d cure Japan’s economic and fiscal ills by resorting entirely, and not just partially, to “monetary shamanism.”

That’s what Izuru Kato, an economist and president of Totan Research, calls Kuroda’s dubious strategy. Japan practiced QE before it ever become a term in English. With predictable results: it did nothing for the economy but triggered unbridled government profligacy that generated ever larger budget deficits and an insurmountable mountain of debt.

But the QE that the BOJ has unleashed since April 2013 isn’t just QE anymore. It’s QQE: quantitative and qualitative easing. No-holds-barred QE. So in the true spirit of Halloween, Kuroda promised that the BOJ would:

The goal is to demolish the yen, savings, real wages, people’s wealth, and that onerousness mountain of debt, much of which will end up on the BOJ’s balance sheet in a few years. And it seems to be working.

As planned under the economic religion of Abenomics, inflation has roared higher. In September, prices were up 3.2% compared to a year ago, with goods prices up 4.6% and service prices up 1.9% (service providers are so pressured by struggling consumers and businesses that they’re eating the 3-percentage-point consumption tax increase rather than passing it on). Here is what that inflation looks like: 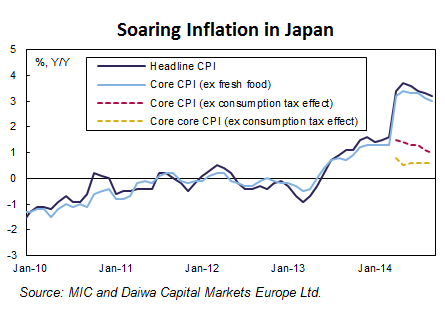 Unperturbed, the BOJ uses its own and more convenient measure of inflation, taking out just about everything that adds to it, such as food, energy, and the impact of the consumption tax increase, to come up with a new and much tamer price index – the yellow dotted line in the chart above – which is still too low and has to be jacked up further.

But wages aren’t rising, so households – which do have to pay for food, energy, and the consumption tax hike – are having a hard time making ends meet. And the increasingly numerous retirees are losing purchasing power and wealth as their savings are being devalued. They’re all coming to grips with the scourge of Abenomics: “inflation without compensation.” It boils down to this, as the Statistics Bureau reported today with equally impeccable timing: In September, inflation-adjusted household incomes plunged 6.0% from a year ago.

And demand? Average monthly inflation-adjusted consumption expenditures by two-or-more-person households plunged 5.6%  from a year ago. It’s the sixth month in a row that expenditures and incomes have plunged in this manner.

The Bank of Japandemonium at work in all its glory!

Its announcement was also impeccably coordinated with another hocus-pocus announcement, this one by Japan’s Government Pension Investment Fund (GPIF). It confirmed that the mega-fund would slash its holdings of Japanese Government Bonds (JGB) down to 35% of its ¥127 trillion in assets (from 53% at the end of September). The fund will dump its JGBs at a pace that is slightly below the additional purchases by the BOJ. This way, everything remains under control. The market only gets involved for the sake of appearances. Beyond the charade, the GPIF will hand its JGBs to the BOJ.

But then the GPIF will plow the newly liberated funds into the stock market to buy up domestic and foreign stocks and foreign bonds – by June! This announcement has been made in various forms for months. Each time such verbiage hit the news, stocks jumped on cue, which was the sole purpose of those announcements.

With the total commitment to monetary shamanism artfully pronounced on Halloween during Japan’s trading hours, pandemonium followed. The Nikkei stock index instantly jumped 5%. The yen collapsed by over 3.5%. In one fell swoop, it cut a big chunk out of the still considerable yen-denominated wealth of the Japanese. And JGB yields dropped further.

It is now perfectly clear that the Bank of Japandemonium has imposed a yield peg, which it continues to tighten. There will never again be a market-based yield for JGBs. Whoever bought them originally will get their money back eventually, but that money will be worth a lot less than what it was worth yesterday. In the interim, they will not earn any measurable yield. And shorting them is useless because the BOJ will simply buy every one that isn’t nailed down.

There is no exit. In a few years, the BOJ’s balance sheet will reach the size of Japan’s GDP, but it won’t be able to stop there. It can never allow the market to set the yields. It would instantly bankrupt the country. Politicians and the Japanese economy have already become totally addicted to government deficit spending and can’t shake the habit. But they know they don’t have to; the BOJ will just print the money.

And the BOJ socked it to foreigners who thought they could make a lot of money in Japanese stocks and then convert their gains into dollars. The destruction of the yen will see to it that those gains will be minimal. Worldwide, markets rallied after the announcement, in anticipation of what? True financial pandemonium? Because that’s what this sort of monetary shamanism will lead to.

By comparison, and only by comparison, the Fed has been practically tame. But the impact of its policies since the financial crisis are now clear: for individual Americans, economic “growth” has meant the opposite. Read… That Shrinking Slice of a Barely Growing Pie: Why the Glorious Economy of Ours Feels so Crummy

21 comments for “Bank of Japandemonium Resorts to “Monetary Shamanism,” and all Heck Breaks Loose”