When it comes to the Federal deficit, reliable numbers are as elusive as unicorns. Not that there aren’t plenty of numbers out there, but they don’t match reality. And reality is ultimately the change in the gross national debt which shows in its unvarnished manner just how much money the federal government actually had to borrow to fill the fiscal holes.

Regardless of what has been proffered by the White House, the Congressional Budget Office, and others, the total gross national debt outstanding of the US of A hit $17.824 trillion in fiscal 2014 ended September 30. A jump for the fiscal year of $1.086 trillion.

It could have been worse: note how it jumped on October 1, the first day of fiscal 2015, by another $51 billion. That’s certainly one elegant way of putting some lipstick on the debt in fiscal 2014 – by kicking part of it into the next fiscal year. But hey, we all do that. From the Treasury Department:

The fact that the total debt taxpayers will have to deal with in the future soared by $1.1 trillion in fiscal 2014 is in part due to last year’s debt ceiling charade in Congress.

Starting in March 2013, when Treasury debt outstanding hit the debt ceiling, the Treasury Department couldn’t sell additional debt to bring in the money that the government continued to spend. So it borrowed that money via “extraordinary measures” from other accounts, to be repaid later. Then on October 16 last year, so in fiscal 2014, President Obama signed a deal into law that avoided default. The next day, the gross national debt jumped $328 billion to $17.075 trillion.

Most of the $328 billion should have fallen into fiscal 2013. If subtracted from the $1.086 trillion by which the debt ballooned in fiscal 2014, it reduces the increase in the debt to $758 billion.

The chart below summarizes the glorious fiscal condition of the US over the years. Note the exponential increase since 2001, after four fiscal years of so-called “surpluses.” In quotes because these “surpluses” between 1998 and 2001 that at one point exceeded 2% of GDP should have brought down the gross national debt by the amounts of the surpluses. But not these “surpluses!” The debt increased in every one of those four years, in total by $394 billion. That’s how much real money it took to cover these government accounting “surpluses.” 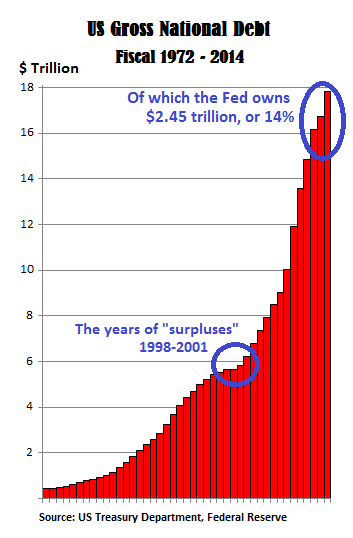 The Fed has been the enabler. After years of QE, it currently owns $2.45 trillion or 14% of the gross national debt, in addition to a couple of trillion in other securities. The Fed’s asset purchase binge with newly printed money allowed the US government to go on a borrowing spree and blow this money. There have been some big beneficiaries: Wall Street, the corporate elite, Warren Buffett in particular through the bailout of this financial and insurance empire, the military and intelligence complex, and others. And there have been millions of small beneficiaries: people receiving federal subsidies of some sort. But for the economy, which is going to have to pay for this debt one way (taxes) or the other (inflation), it has been a slog.

How fast will the debt balloon from here? The Congressional Budget Office has its own ideas. Relentlessly over-optimistic, it never sees any recessions in the future, nor further bailouts and similar shenanigans that Congress may inflict on taxpayers. In its annual update in the spring, it figured that the budget deficit for fiscal 2014 would be $492 billion. In reality, the US borrowed 121% more than that to cover the fiscal deficit. Even if we subtract the $328 billion from the total to lower the debt increase to $758 billion, the US still borrowed 52% more than CBO’s deficit projection.

Even based on these iffy numbers by the CBO, the deficit is expected to decline only for fiscal 2015 and 2016, with the total debt rising at a slower rate than in recent years. That assumes that the next recession won’t wreak its havoc. That’s the good part in those projections. But then, the deficit will rise again, and the debt will pile on even faster.

But heck, that’s government accounting. Corporate accounting is similar. It’s a mix of revelation and obfuscation. In the end, real money is spent on real expenses, and if real receipts don’t suffice to pay for them, the government borrows real money. It all coagulates in the moment of truth: changes in the gross national debt. And if history is any guide, the national debt will increase far faster than the rosy projections by the CBO.

The White House submitted its budget for fiscal 2015 to Congress earlier this year. But Congress is genetically incapable of ever passing a real budget before the fiscal year starts, or actually at any time. So now into fiscal 2015, with real deficits piling onto the real mountain of debt, there is still no budget, not even the first signs of one, as Congress is too busy beating the war drums, handing all sorts of goodies to corporate America, squeezing everything and everyone within reach for campaign contributions, and engaging in no-holds-barred electioneering. The national debt can just go to heck.

One element the CBO hasn’t taken into account is the housing market. It’s a show that repeats itself every time. Read… US Home Prices Are Rolling Over (in one Chart)