In April, after the broad-based consumption-tax hike from 5% to 8% had taken effect, retail sales collapsed 20% from March. Total vehicle sales collapsed 56% to the worst level since December 2012, and December is usually the worst month of the year in Japan. April was terrible. It was much worse than feared by the Abenomics soothsayers and apologists.

But the shock didn’t last long, and soon the soothsayers and apologists were at it again. In May, car sales were worse than a year earlier, but not much worse (-1.2%); and in June, car sales were actually a smidgen better (+0.4%) than a year earlier, and hopes were being propagated that this would all somehow work out. But in July sales dropped 2.5% year over year, and other data points were going to heck as well.

In August, vehicle sales as measured by registrations swooned, according to the Japan Automobile Manufacturers Association. All categories were down: sales of new cars, including minis (tiny cars with tiny engines), plunged 9.4% year over year to 281,326 units; sales of new trucks of all sizes including minis dropped 7.2% to 51,165 units. And total vehicles sales, retail and commercial, cars, trucks, and buses plunged 9% to 333,471 units.

It was worse even than that terrible April, though in recent years, August had been better than April. It was worse even than December 2012. It was the worst month since August 2011, the time when the consequences of the Great East Japan Earthquake and tsunami that had killed over 19,000 people were still paralyzing Japanese commerce, and when countless aftershocks were still rattling buildings and nerves on a daily basis: 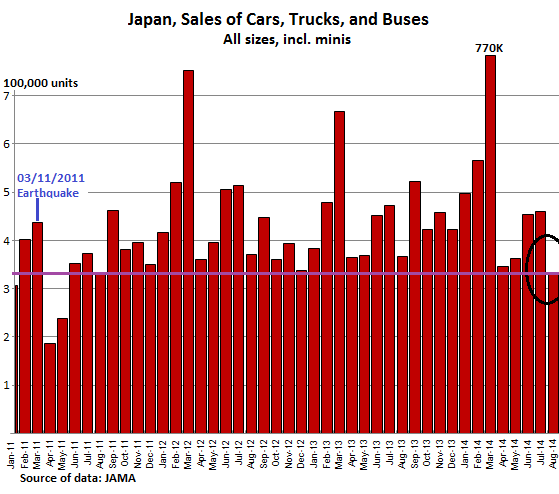 Most of the vehicles sold in Japan are made in Japan, the single most protectionist auto market in the world, despite decades of screaming by US automakers. So the decline in sales isn’t distributed in part over importers and their plants in other countries. Instead, it’s going to hit mostly Japanese production.

Abenomics soothsayers and apologists are worried. The August debacle is hard to explain away, even for them. It just sits there, a nagging, dark reality. And reality is that Abenomics is coming home to roost.

One of the key elements of Abenomics is an all-out effort to stir up inflation. And grudging respect is due Prime Minister Shinzo Abe and his ilk for using the printing press of the Bank of Japan to accomplish that lofty goal. They’ve been successful.

Goods inflation in July jumped 4.3% year over year, with vendors passing on a big part of the tax hike to consumers. Service inflation was up only 1.7%, indicating that service providers, also covered by the consumption tax, have eaten the tax hike and absorbed it in their margins rather than passing it on to their customers, at least for the time being. Which will cut into their profits, and into their ability to grow and invest and spend and pay their employees more – and thus into their ability to push the economy forward.

Price increases of this type leave skid marks on consumers. Unless compensation moves up in parallel, the consequences are clear.

Alas, compensation has done the opposite. It has declined further. The Statistics Bureau reported that the average of monthly household income in July dropped 2.4% before inflation from the previous year – and plummeted 6.2% in real terms. Inflation without compensation.

So the hapless Japanese consumers are in the nightmarish situation of having to watch how the government that they themselves elected into power is executing its plan that had been part of its election platform. That plan is now destroying their earnings power and their life savings at a rate that middle-aged Japanese have only read about in history books.

The wrath of Abenomics – inflation without compensation – has been slamming into these consumers month after month with relentless regularity. Inflation mongers should be ecstatic. Their wildest dreams are coming true. But as auto sales and consumption expenditures have shown, and as numerous other data points have shown, and as the just downwardly revised 7.1% plunge in GDP last quarter has shown, this strategy is terrible for the Japanese people, and it’s crushing the economy.

The three infamous arrows of Abenomics – promise, hype, and hope – that came with a mega-bout of money-printing by the Bank of Japan and tax cuts for Japan Inc. hit their victims and produced propitious results. Read…   Abenomics Goes to Heck, in one Chart