Sales of new single-family homes fell 2.4% in July, to a seasonally adjusted annual rate (SAAR) of 412,000, the worst in four months, and those four months had been nothing to brag about. While up 12.6% from a year ago, sales have been languishing, as the chart below shows, near the bottom of the range. By comparison, during the housing construction bubble, new single-family homes were selling at a seasonally adjusted annual rate of well over 1,000,000.

The inveterate optimists that economists have become were disappointed. They’d expected a rate of 430,000 sales.

So, on a monthly basis, sales and prices are heading south. These numbers from the Census Bureau are volatile and subject to big revisions; hence, by a miracle, sales and prices might  reverse course. But over the longer term, and after revisions, one trend is now becoming glaring: the supply of new homes on the market (green line, right scale) rose to 6 months, from 5.6 months in June. It was the highest – and for builders the worst – level since October 2011: 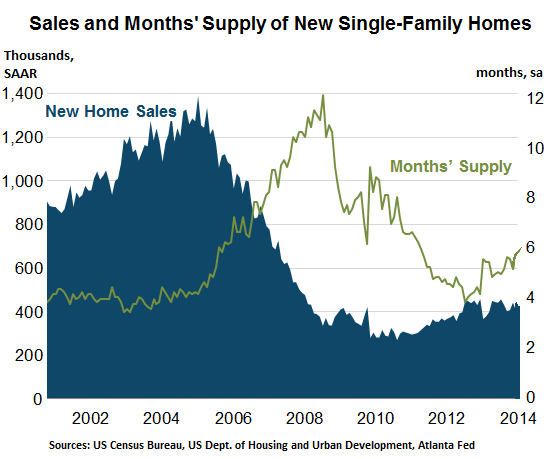 Rising supply of unsold homes is the bane of the industry. During the last housing bubble, inventory in terms of months’ supply shot up: as sales declined, new homes were still being planned, built, finished, and put on the market. The process takes time, and the supply faucet can’t be shut off overnight. Oversupply is a powerful force in the market.

Unperturbed, home-builder optimism about the future has been sizzling, perhaps fired up by prices that until recently had been soaring. At the same time, they’re complaining in the most recent home-builder survey about very crummy foot traffic, possibly a result of these prices that have soared beyond the reach of most households. And now the dark clouds forming over the industry have led government-sponsored and bailed-out mortgage giant, Fannie Mae to sledgehammer its formerly rosy forecasts for home construction and sales for the rest of the year – as Housing Bubble 2 is brushing up against the thorns of reality.

Profit grows on trimmed trees, freshly painted walls, and rehabbed bathrooms, and flipping volume soars, and nothing can go wrong. Then something goes wrong. The Home-Flipping Bubble Implodes