America is on the verge of becoming a natural gas net exporter in a year or two. It can relieve energy-starved Japan from extortionary prices and free Europe from the clutches of Gazprom. A number of liquefied natural gas (LNG) export facilities on the Gulf Coast and on the West Coast have been approved, are under construction, or are in the pipeline, so to speak. Untold riches await daring investors.

Or so it would seem, according to the hype, often as thick as San Francisco fog in the summer, that has shrouded the segment of the industry. Some stocks of companies hoping to ride that LNG export boom are soaring. Billions, mostly borrowed from unsuspecting or blind lenders of one type or another, have already been spent, and many more are going to be spent, on highly capital-intensive LNG export terminals.

How can this insanity occur? Consensual hallucination. Analysts, hype mongers, company pronouncements, free money from the Fed, and willing traders or investors – all are part of it. For them, the outfit is a highly leveraged arbitrage wager on the difference in natural gas prices in the US, Japan, and Europe.

In the US, natural gas prices in electronic trading are currently below $4 per million Btu. In Europe they’re more than twice as much, in Japan more than four times as much. But processing natural gas into LNG in the US and transporting the LNG from the US to Europe or Japan is going to eat up a chunk of that price differential.

So the stock is a nose-bleed bet that the price in the US will remain this low, and that prices in Japan and Europe will remain high, and that contracts are signed to reflect these price differentials for years to come.

This assumes that there will be natural gas to export.

But there has been a hiccup: the US is a natural gas net importer, still, despite years over “over-drilling” and a presumed natural gas “glut” that whacked the price below the cost of production, where it still languishes today. 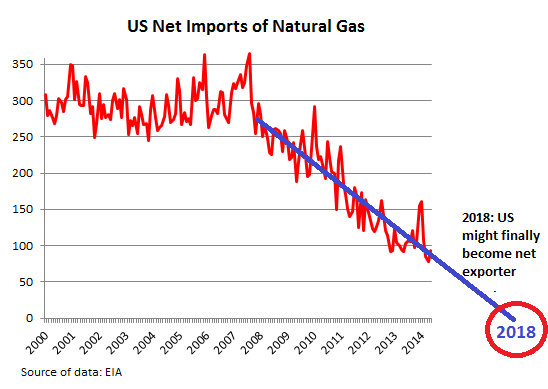 So what natural gas exactly are these LNG exporters going to export?

Currently, US production doesn’t meet domestic demand. Period. The hole is filled with imports from Canada. Large-scale LNG exports remain a pipedream for the moment. Unless a miracle happens, and they’re unlikely in the oil and gas business, US production might meet domestic demand without reliance on imports by 2018. And if production continues to grow beyond that, the US might eventually produce enough to become a net exporter of significant quantities of LNG.

But there has been another hiccup: Drilling for dry gas has been grinding to a halt. By last week, only 313 rigs were drilling for natural gas across the country, down from 1,606 in September 2008.

Production is up, but these production increases come mostly from the Marcellus shale where an enormous drilling boom over the last few years left thousands of gas wells without pipeline connections. Now that the pipeline infrastructure is catching up, take-away capacity is rising. Gas that is taken to market is counted as “production.” But many of those wells that are now responsible for the increase in production were drilled years ago.

Only a new drilling boom could re-launch production.

And there we have a third hiccup. The current price is simply too low to justify fracking for dry gas, though if the well primarily produces oil and natural gas liquids, which sell for higher prices, and dry gas is merely a byproduct, the equation is less dreary. So for that new drilling boom to take off, the price would have to be significantly higher.

Hence the fourth hiccup: these significantly higher prices of natural gas in the US that would be needed to restart the drilling boom also destroy the highly leveraged arbitrage bets that LNG export investors are counting on in the first place. But consensual hallucination allows for no doubts and no paradoxes. Reality no longer matters. What matters instead is the Fed’s limitless, nearly free money and the plentiful availability of corporate and Wall-Street hype.

Drillers that have joined the fracking boom in the US have stepped into a toxic mix. Read…. Where Money Goes to Die: How Fracking Blows Up Balance Sheets of Oil and Gas Companies

4 comments for “Stock Hype On a Wing and a Prayer”