It appears from recent media coverage of the EU and the Eurozone, and from pronouncements by Eurocrats and politicians alike, that the economy has been recovering steadily. Stocks have boomed, even in France, where the CAC 40 has soared over 50% since the moment that the Eurozone officially conquered the debt-crisis in May 2012. All is well in France, the market said.

The French economy has been aptly led by the most despised tax-and-retreat President of the Fifth Republic, François Hollande, whose approval ratings didn’t stop plunging until they broke through the 20% mark, and by his equally adept government. They left the private sector wheezing for air. And a huge government sector, whose expenditures account for over half of GDP, has been running very recalcitrant deficits to the point where the prior solutions, such as creating jobs, any jobs, even fake jobs, with the stroke of a pen funded by borrowed money that future taxpayers would have to deal with, have gotten mired down.

And so the French unemployment fiasco continues unabated. In June, the number of people registered with the unemployment office, Pôle Emploi, as jobless and who made “positive efforts” to obtain employment (Category A) rose 0.3% from May and 3.8% from last year to a new record of 3.662 million. If the people are included who only have part-time jobs but want full-time jobs (Categories B and C), the total jumped 0.4% from May and 5% from a year to a new record of 5.343 million.

And if those job seekers who for whatever acceptable reason are deemed to not have made “positive efforts” recently (Categories D and E) are included, the broadest measure of the French jobs fiasco jumps to 5.719 million, up 24,000 or 0.4% from May and up 5.7% from a year earlier.

This leaves us with one of the ugliest unemployment charts in the Western world. And there is no sign that the fiasco will abate any time soon: 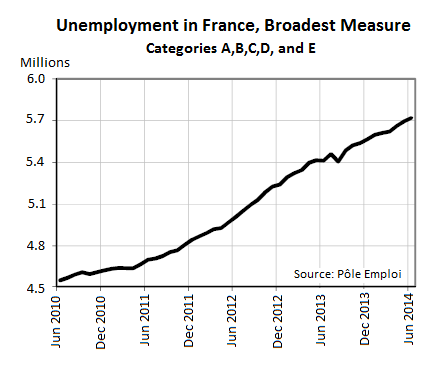 However, as in other countries, these terrible numbers don’t even include those folks over a certain age who have been switched over to “retired” status, or those utterly discouraged who have simply given up and have fallen off the registered unemployment list for whatever reason.

And long-term unemployment, as measured by those registered as unemployed for a year or longer, has been deteriorating at an ugly rate and has become a screaming indictment of French economic policies: 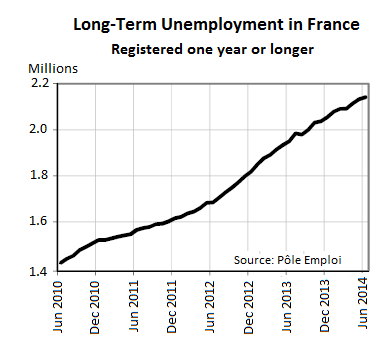 Pôle emploi doesn’t publish the percentage of those registered as unemployed in relationship to the labor force, which would produce a version of the unemployment rate. And a very ugly one. But it’s easy enough to figure, and helpful as I am, I will figure it for Pôle emploi, so that they know how to do it next time:

This is why these rates are not published. They’re too terrible. And too honest. They’re based on actual unemployment registrations, and not statistically adjusted and beautified surveys. And they remain the most accurate measure of the French unemployment fiasco.

But these rates, if they ever became public, might poison the political climate in France. And so statisticians are called into action to make this debacle look better.

According to Eurostat’s methods, the nicely beautified – the official terms are “standardized” and “seasonally adjusted” – unemployment rate is only 10.09%. And given the pressures to make things look less terrible in France (and elsewhere in the EU), and offer some hope that people can sink their fingernails into, the rate has been, mirabile dictu, edging down since its peak in September last year.

Eurostat’s figures are based on the figures of the French statistical agency, Insee, which operates based on surveys rather than the all too ugly unemployment registrations. Insee publishes the official French unemployment rate on a quarterly basis. And for the first quarter, it came up with 10.1%, also down slightly from the peak in the third quarter.

Despite its feverish efforts to dig up all the jobless people in France, it found only 2.8 million of these hapless souls. Yet Pôle employ had 4.075 million on its official rolls. And no one knows where the remaining 1.275 million unemployed people have officially disappeared to.

He has “no name, no face, no party,” “never runs for office,” “and yet he governs,” François Hollande said about “his true opponent” in 2012. The speech went viral. But that courage didn’t last long. Read…. No Politician Is Allowed to Oppose Banks For Long, Not Even the French President