Consumer confidence is one of the data points that are used, most often unsuccessfully, to predict what consumers might do, specifically how much money they’re going to spend – because a wallet with legs is what you get boiled down to in our economic system once you’re a “consumer.”

The assumption is that consumers who are feeling good about their present condition and who expect nice things such as pay raises to come their way are more likely to spend more money. Once they pull out their digital form of payment, they’d set off a chain reaction, which would give the government and the Fed something to brag about.

Thing is most Americans are already spending every dime they’re making, and those who have access to credit are spending way beyond what they’re making, and they’re maxing out their credit cards, and they’re getting new credit cards to make minimum payments on their existing but maxed out credit cards, not because they have confidence but because subprime is once again hot, and banks are eager to charge 21% or more in interest though their actual cost of money, thanks to the Fed, is near 0%.

And it isn’t confidence that is going to increase their speeding but even more credit – which they will never be able to pay off, and they know that too [for some additional amusement, read…. Last Time Lenders Did This, They Triggered The Financial Crisis].

However, wage increases, including a minimum wage increase – not confidence – would get them to spend more the minute the extra moolah shows up in their paychecks. And they’d spend all of it. Yet giving the lower 80% or so of the workers a pay raise that exceeds inflation is the most frowned-upon activity in corporate spending these days. Better to buy back a few million shares.

But at the upper echelons of the American consumer pyramid where people have savings and investments, more confidence could actually trigger more spending.

So consumer confidence has been rising. Things are good in the US economy. That relentless message is finally getting through to us boneheads. The most recent reading of the Conference Board’s Consumer Confidence Index rose to 85.2, the highest level since January 2008!

But look who is feeling confident and who is not. The chart (via OtterWood Capital Management) divides us hapless consumers into two groups – households making more than $50,000 per year, and households making less than that. So we’re not comparing the top 1% to the bottom 20%. We’re cutting a line straight across the American middle class and comparing what is on either side. And the an ugly reality crops up. 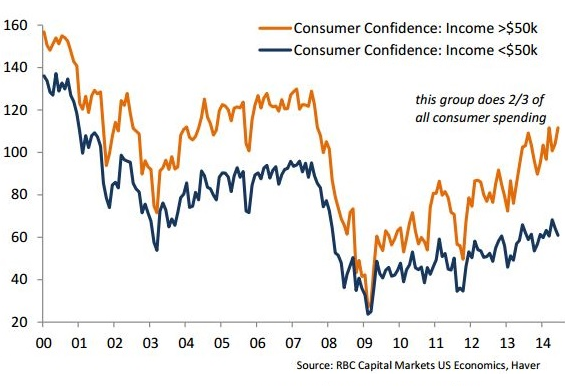 Those below $50,000: their confidence dropped to just above 60, a 12-week low. And those lucky ones making over $50,000 were feeling flush, and their confidence level rose to a new post-recession high exceeding 115. That’s nearly twice as high as that of the lower income group. And the gap is at an all-time.

But it’s not by accident. This has been the strategy of the Fed’s monetary policy all along. Fed Chair Janet Yellen and her ilk are glad that these high-income folks – which include Yellen herself – are feeling good. It’s a point of professional pride. These folks are responsible for about two-thirds of consumer spending. If they’re handed in various ways a few trillion dollars in printed money, mainly through asset bubbles, they’ll feel even more confident and smart, and they might sense an urge to splurge and buy things they don’t need, and it temporarily gooses GDP.

But those below, those who already spend every dime they make and can borrow? Fed policymakers don’t care about them. They won’t ever spend more anyway because they don’t earn enough. Though they make up a big part of the population, they can’t contribute much to consumer spending. Their role is to be the low-cost labor force that corporate America wants beyond all else.

Banks are again taking the same risks that triggered the financial crisis, and they’re understating these risks. It wasn’t an edgy blogger that issued this warning but the Office of the Comptroller of the Currency. And it blamed the Fed’s monetary policy. Read…. Federal Regulator Details Crazy Risk-Taking By Banks And Blames The Fed