During the first quarter, 3.7 million credit cards were issued to subprime borrowers, up a head-scratching 39% from a year earlier, and the most since 2008. A third of all cards issued were subprime, also the most since 2008, according to Equifax. That was the glorious year when “subprime” transitioned from industry jargon to common word. It had become an essential component of the Financial Crisis.

As before, subprime borrowers pay usurious rates. These are people who think they have no other options, or who have trouble reading the promo details, or who simply don’t care as long as they get the money. In the first quarter, the average rate was 21.1%, up from 20.2% a year ago, while prime borrowers paid an average of 12.9% on their credit cards, and while banks that are lending them the money paid nearly 0%.

These usurious rates and the fees that are artfully tacked on to the bill at every remotely possible occasion make it nearly impossible that the borrowers can ever pay off their credit cards. They’ll just keep paying the minimum payment, while balances balloon. And they’ll balloon even if the holder no longer charges to the card. Subprime credit cards are there to be maxed out, and the only thing that keeps these folks out of trouble is getting more cards, juggling cards, transferring balances, taking out cash advances on one card to make the minimum payments on the others….

Banks play along, whipped into a frenzy by the sweet smell of usury. Their credit-card promos are once again clogging up mailboxes around the country, and profits on these cards soar, and everyone is happy – banks, borrowers, and of course the American economy that thirstily laps up borrowed money.

“I was surprised they’d give me so much,” the Wall Street Journal quoted one of the winners who’d recently gotten a credit card with a $15,000 credit limit. But as long as new credit cards with ever greater credit limits are available, banks won’t have to worry about charge-offs, no matter what the balance or the cardholder’s ability to make payments.

The St. Louis Fed has a measure for that symptom: the Financial Stress Index. It has been skittering from one all-time low to the next. It shows that years of nearly free money sloshing through Wall Street has just about eliminated any kind of financial concern.

The index, which dates back to 1993 and is based on 18 components, has an average value of zero. Higher financial stress shows up as a positive value, lower financial stress as a negative value. In the latest reporting week, ended June 20, the index dropped to -1.332, the lowest in its history for the fourth week in a row.

The previous period of record lows occurred in February 2007, hitting bottom at -1.268.  Stocks were flying high, LBOs livened up lunch conversations, and the media swamped Americans with delicious hype. OK, housing was “taking a break,” as it was called. Banks and mortgage lenders were cracking at their foundations. But so what. Financial stress had been wrung out of the system. There were no risks.

Then some reeking details infiltrated the Financial Stress Index. By the time Bear Stearns collapsed in early 2008, it was ratcheting higher erratically. In August that year, it spiked. Then Lehman popped, stocks plunged, junk-bond yields soared, bank CEOs wondered who’d be next, and on October 17, it peaked at a cathartic 6.27. Wall Street had gotten tangled up in its own underwear. 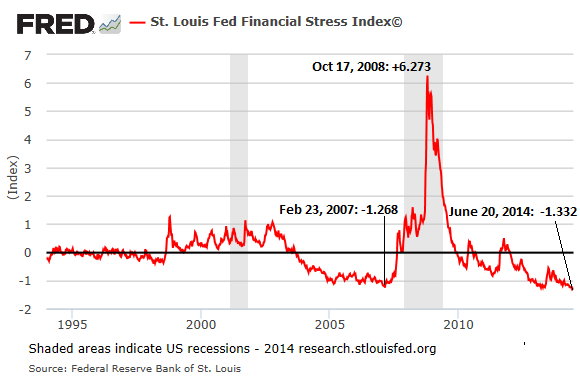 The Fed’s tsunami of free money bailed out Wall Street and our over-indebted corporate heroes. Among them GE whose CEO Jeff Inmelt was a Class B director of the New York Fed, which handled the bailouts. And the Financial Stress Index plunged. By December 2009, it was back at zero. Financial stress was expunged from the system even as the greatest unemployment crisis in recent history was ravaging the country. On the sound principle that handing unlimited amounts of free money to Wall Street would reward Wall Street.

But the Financial Stress Index has a peculiar feature: it pinpoints the time when credit quality deteriorates, when asset prices have been inflated to dizzying levels, when subprime lending becomes a low-risk business model, when reckless financial decisions are being made by everyone in the system, from cardholders to bank CEOs, and when a new set of logic explains in detail why this craziness is perfectly reasonable. Yet these issues are time bombs that are cluttering up the shelves, ticking away.

Meanwhile, thanks to record low financial stress in the system, subprime cardholders are happily spending themselves into nirvana. But once they’ve run up their balances to vertigo-inducing heights, the banks open their eyes. Stunned by what they see, they don’t want to play anymore. They stop raising credit limits and sending out new cards. Then they see the other time bombs ticking on their shelves. And suddenly we’re back to 2008. That’s what the record low financial stress index is pointing at.

The thing is, banks are again taking the same risks that triggered the Financial Crisis, and they’re understating these risks. It wasn’t an edgy blogger that issued this warning but the Office of the Comptroller of the Currency. And it blamed the Fed’s monetary policy. Read….Federal Regulator Details Crazy Risk-Taking By Banks, Blames Fed