The S&P 500 stock index bumbles to new highs no matter what. But it has been a slog: serial GDP downward revisions forward and backward, unceremonious abandonment of “escape velocity” for the fifth year in a row, wars or civil wars in Ukraine and Iraq with consequences for gas supplies to Europe and oil supplies to the world, US inflation heating up. And stocks nevertheless rise because…. The Fed Rules, Metrics and Ratios Are Just for Decoration.

In the Business Roundtable’s second quarter CEO survey, the chiefs of the largest US corporations weren’t exactly in an ecstatic mood either. They lowered their GDP growth forecast for the year to 2.3%; among other tidbits, they also expected to spend less money on capital investments.

Capital investments are crucial to the economy. One, they crank up GDP when the money is spent. And two, investing in productive assets creates future growth. But only 44% of these CEOs are planning to increase capital investment, down from 48% last quarter.

Companies axe capital investments brutally when dark clouds appear at the horizon. It started in early 2000 as the stock market was blowing up and lasted through the recession that followed. Then capex recovered and peaked in the summer of 2008, even as the financial crisis was spreading. In either case, that sudden cut in corporate investment deepened the recessions. This chart of new orders of non-defense capital goods (St. Louis Fed) shows the brutality of the cuts – for example, slashing them by a third from $69 billion in August 2008 to $46 billion in April 2009: 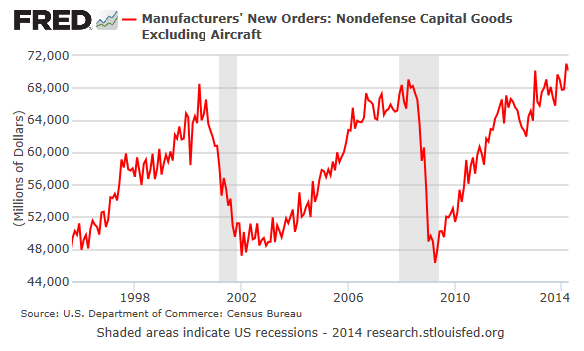 But note how the chart has stayed within its range over the last two decades – a time when the US population has soared 19% and GDP, adjusted for inflation, 51%. Turns out, corporations had found other things to do with their money: stock buybacks.

Which have been skyrocketing. In the first quarter, buybacks jumped 50% from a year ago to $154.5 billion, according to FactSet‘s report released yesterday. It was the third-largest in the data series, behind only 2007 when in Q2 and Q3 $161.8 billion and $177.9 billion were spent on buybacks, while the financial crisis was already fermenting underneath.

Tech blew $47.4 billion on buybacks, a record in the data series, up 175% from a year ago. A cool $18.6 billion of that came from Apple. IBM was in second place with $8.3 billion. Industrials, up 119% from a year ago, also set an all-time high. Overall, Apple and IBM led the pack, followed by FedEx, Boeing, Abbott Laboratories, Corning, and eBay.

For the trailing 12 months, our corporate heroes bought back $535 billion – funded largely with borrowed money – a notch below the $603 billion record set during the trailing twelve months ended in Q3 2007, on the eve of the financial crisis (chart by FactSet): 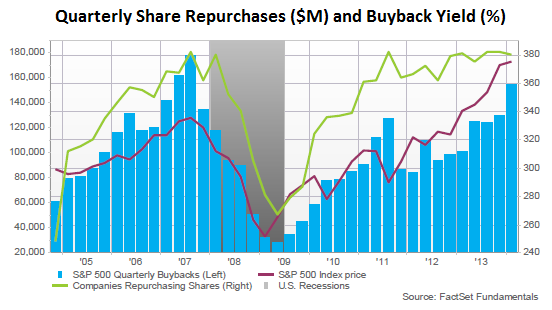 Buybacks peaked precisely at the top of the market in Q3 2007 then plunged over 80%. By Q2 2009, when stocks were cheapest, buybacks had nearly stopped. It seems like a clockwork of bad timing: buybacks soar when stocks go into bubble mode and collapse when stocks get cheap. But the relationship works the other way around.

The purpose of buybacks is to use shareholder equity to manipulate up the stock price. It works in three ways: one, through the sheer buying pressure – especially easy during these times of super-low trading volume; two, through this form of financial engineering that boosts earnings per share by lowering the share count, though it does nothing for actual earnings; and three, through the hype surrounding the buyback announcements and even the whispers of them.

And it works even when, as for example in IBM’s case, revenues and actual earnings are crummy for two years in a row, and when the stock should be roasting in purgatory. At every earnings announcement, the stock plunges, but then over the next three months, mirabile dictu, the share price rises again, fired up by buybacks. The Wall Street hype machine uses them as bait. Investors swallow them hook, line, and sinker. But that’s all buybacks do.

But the tide seems to be turning, and the money seems to be ebbing. Most of the top buyers have already indicated that they’re cutting back. A couple of days ago, FedEx announced that it whittled down its buybacks from $2.8 billion in Q1 to $1 billion this quarter. When Apple raised its buyback authorization through December 2015, it worked out to be $6.3 billion per quarter – down from $18.6 billion in Q1. IBM slashed its full-year buybacks by about $2 billion per quarter for the remainder of 2014. GE disclosed that it would cut its buybacks. Exxon Mobil, AT&T, Oracle, and Wal-Mart already reduced their buybacks in Q1 from the average quarterly amounts in 2013.

So what happens to the stock market when these huge and reckless buyers with their nearly endless resources and ability to borrow at practically no cost start cutting back after such a phenomenal peak? Well, we know what happened when they did the last time: the stock market crashed.

There comes a time when risk just disappears, when nothing can go wrong, when there are no dark clouds on the horizon. The Fed has a measure for it: the Financial Stress Index. Read….Last Time this happened, The Financial Crisis Broke Out