It always starts with a toxic mix. Last fall when sales that had been predicted to continue their miraculous ascent were suddenly swooning, soothsayers dealt with it by developing a whole plethora of excuses. At each new disappointment, they dragged out new excuses. But in May, the toxic mix came to a boil, and now there are no more excuses: sales plunged and inventories jumped. The housing market is buckling under its own inflated weight.

And what excuses they’d come up with! Last fall, the fiscal cliff, the threat of a government shutdown, the possibility of default that was belittled by everyone supposedly made home buyers uncertain. But these issues were swept under the rug, and sales continued to drop into the winter. Polar vortices were blamed, though in California, where the weather was gorgeous, sales dropped faster than elsewhere. Then the spring buying season came around when massive pent-up demand was supposed to sweep like a tsunami over the land. But sales continued to decline. So tight inventories were blamed. There simply weren’t enough homes for sale, it went.

Alas, in May, new listings rose 6.5% from a year ago to a four-year high in the 30 markets that electronic real-estate broker Redfin tracks. People were dumping their homes on the market; new listings soared 25.5% in Ventura, CA, 15.8% in West Palm Beach, and 15.4% in Baltimore. This is what it looked like for all 30 markets combined: 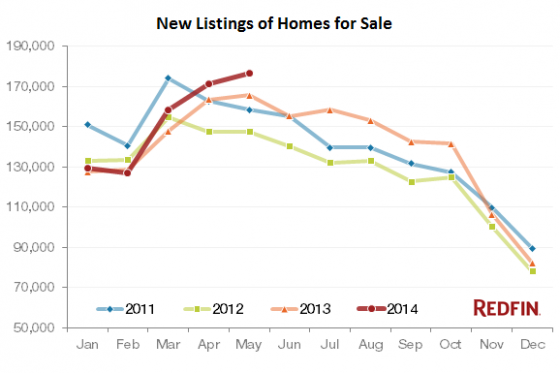 The onslaught of new listings added to the unsold inventory and pushed up the total number of homes for sale by 9.1% to the highest level since August 2012. And in this elegant manner, the final excuse of tight inventories causing the plunge in sales went up in smoke.

This rise in inventory has been going on all year. Yet, as Redfin pointed out with a soupçon of irony, it was “surprising to some, given the speculation about extremely low inventory creating intense pent-up demand among buyers who have been waiting for months with low interest rates burning holes in their pockets.” 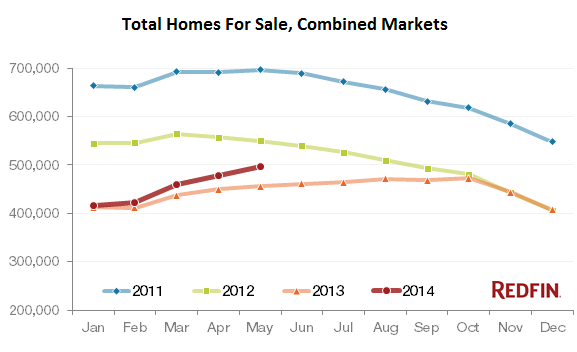 Real estate is local. During the last housing bust, some areas started to crater in early 2006, while others hung in there for a while longer. San Francisco’s bubble hit its peak in November 2007, and everyone thought that the city, being so unique, would be immune to the pandemic of housing mayhem. A month later, it cratered. So this time too, it isn’t impacting all markets equally. In 10 of the 30 markets, inventories were actually down. But in some of the hottest markets a year or two ago, inventories skyrocketed: up 14.6% in Los Angeles, 15.5% in Washington, DC, 16.2% in San Diego, 23.1% in Sacramento, 27.9% in Orange County, 30.9% in Riverside-San Bernardino, CA, and up – I’m not kidding – 33.4% in Phoenix.

And this inventory isn’t selling: in the 30 markets, sales in May plunged 10% from a year ago. Now that homes are coming on the market in large numbers, buyers, faced with sky-high prices and higher mortgage rates, went on strike: 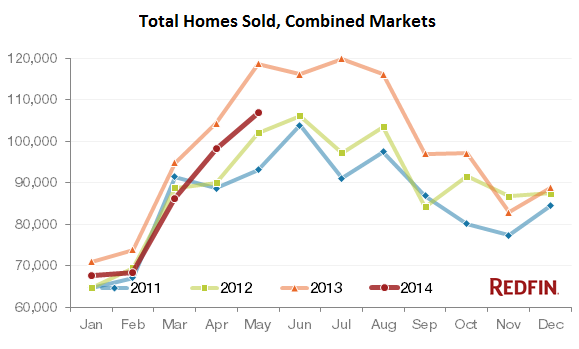 But, but, but… the median sales price still rose 8.2% in May from a year ago, though that’s down from the 14.5% increase in May 2013, and from the 20% at the peak of 2012. Redfin reported that its agents had observed “the shift away from a sellers’ market, with buyers having more power and less competition.” But apparently, “many sellers still haven’t read the memo.”

Since early 2012, Wall Street players, armed to the teeth with the nearly free and limitless money that the Fed in its infinite wisdom has made available specifically for these purposes, piled into the market, buying up hundreds of thousands of homes helter-skelter and turning them into rental properties. It switched these homes from for-sale lists to for-rent lists, where many languished unperturbed, and it drove up prices in record time. Current homeowners welcome that.

But first time buyers, the natural force in the housing market, were effectively pushed aside and are now priced out of the market. Even many current homeowners who want to sell are locked into their homes as they cannot afford the next home, given higher mortgage rates and sky-high prices. At these prices, even investors can’t buy these homes and rent them out at a profit. In many areas of the country, that business model is kaput. So they pulled back too. This is how the Fed fixed the housing market.

The only thing lacking in this “fixed” housing markets are willing and able buyers. So inventories are piling up, and someday sellers will “read the memo.” Then prices will be whittled down to where they make economic sense in this economy. We’ve been through this before. Only this time, it’s different: the Fed, which so eagerly took credit for having “fixed” the housing market, is going to be hard-pressed to cut interest rates further, or do anything else it isn’t already doing.