There comes a time when risk just disappears, when nothing can go wrong, when there are no dark clouds on the horizon. Stocks rise to record after record. The crappiest junk bonds are priced as if they were safe investments. Inflation is excluded from the calculus. Even the mere possibility of default has been banished from considerations. And investors no longer demand to be compensated for any of it. They close their eyes and hold their nose and grab what they can.

These are times of exuberance, of record low volatility and supreme complacency, when retirees invest their life savings in bond funds stuffed with junk to get a little extra yield; when the ratings agencies finally can get busy again doing what they do best: stamping triple-A ratings on sliced and diced junk; when formerly toxic instruments that helped take down the financial system are once again desirable “assets”; times when otherwise rational people turn into blind automatons.

The Fed has a measure for it: the Financial Stress Index, issued by the St. Louis Fed. And according to the index, all this craziness, created by the Fed’s policies, is simply a sign of low “financial stress.” The data series goes back to 1993. The index is intended to be at zero, on average. Higher financial stress would show up as a positive number, lower financial stress as a negative number. And in the latest reporting week, ended May 30, the index fell to -1.281, the lowest in its history.

The previous record low occurred in February 2007 at -1.268. A very unpropitious moment. The housing bubble was already imploding, but at the time, “the froth” was just coming off; it was “plateauing” before the next surge. Stocks were still going up on a relentless escalator. Merger Mondays were thrilling CNBC talking heads. Mega-LBOs were greeted with media hoopla even as leverage in the system skyrocketed. And malodorous fumes were already emanating from cracks that had appeared in the foundations of banks and other financial institutions.

Bit by bit, these inconvenient issues were worming their way into the Financial Stress Index, and by August 2007, the index rose into positive territory, and even then it edged up only gradually, and it made it past the Bear Stearns collapse in early 2008 without much of a squiggle, but by August 2008, it was at +1.17 and by September 5, it was at +1.47, and then the Lehman moment happened, and suddenly, after having essentially ignored all the issues along the way, the index spiked every week until it peaked on October 17, at a phenomenal 6.27: 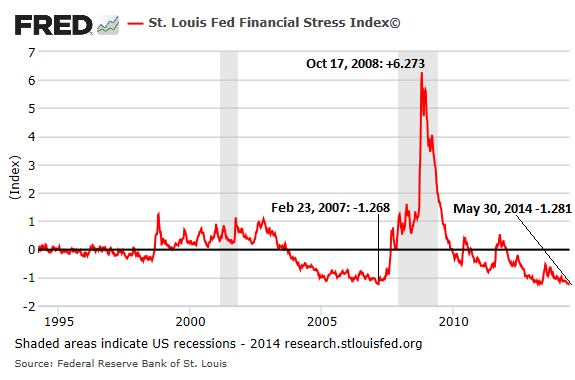 By October 2008, the stock market was in freefall, and the Fed was bailing out the banks, GE, IBM, Warren Buffett’s insurance and finance empire, and all the other overleveraged financial and industrial sinners. Throughout, as the Fed’s liquidity was washing over the land, the Financial Stress Index dropped steadily. By December 2009, it was back at zero. And except for two minor interruptions, it has since stayed below zero.

Of the index’s 18 components, seven are measures of interest rates (Fed Funds, Treasuries, corporate bonds, and asset backed securities), six are measures of yield spreads, and five “Other Indicators” are a grab bag of measures that include the VIX volatility index, expected inflation rate (10-year Treasury yield minus 10-year TIPS yield), and the S&P 500 Financials index.

The components – except for the Fed Funds rate – are measures of how market participants perceive financial stress, and how they react to it. In bubble times, when exuberance rules the day, and when nothing can go wrong, and when risk has been banished from the system, and when interest rates are low, perceived financial stress disappears.

But the gauge is a horrible predictor. So horrible that it has become a contrarian indicator. The prior record low of “financial stress” was achieved when the financial system in the US was in the early stages of collapsing under mountains of toxic securities and mega-bets put together and sold at peak valuations to conservative-sounding funds held by unsuspecting investors in their retirement nest eggs. And banks stuffed them into their basements and into off-balance sheet vehicles, and their financial statements spoke of values and profits that didn’t exist, and no one cared. Greed ruled the day. Damn the torpedoes, full speed ahead.

It isn’t that low financial stress caused the Financial Crisis. It’s that low financial stress incited decision makers – from homebuyers to bank CEOs – to make willfully reckless decisions that can only be made and funded when there is money for everything, and when this crap can be unloaded no questions asked. It happened in 2007, and it’s happening now again. Read….Selling Your European Stocks Before Everyone Else Sees This Chart?