It’s part of the daily routine by now: the S&P 500 index rose to another all-time high. We’ve been confronted with this miracle for a long time. The last correction when the index dropped over 10% was, well, if anyone can even remember, in 2011. And it shows.

Every single bearish call on the S&P 500 has been punished with a rally, followed by ridicule. Realism got to be very expensive for those hapless daredevils. Financial advisors lost clients over mentioning the possibility that the market could someday head south. To save their own skin, they did what it took: an all-time record 62.2% are bullish, up from 58.3% a week earlier, above the exuberance line of 55% for the fifth week in a row, above the prior record of 62.0% set in October 2007. Which wasn’t, it turned out, the ideal time to be bullish.

“Danger territory” is what Investors Intelligence, which compiled these numbers, called the phenomenon where everyone is comfortably relaxing on the same side of the boat.

“Almost all clients have the same outlook: 3% economic growth, rising earnings, rising bond yields, and a rising equity market,” Goldman Sachs chief equity strategist David Kostin wrote in a research note a few days ago after he’d met with numerous institutional clients. They considered Goldman’s own forecasts for the S&P 500 – 1900 by the end of this year and 2100 by the end of next year – too conservative.

Risk is no longer priced into anything. Volatility has gone to sleep. Uniformity of thought has taken over the stock market. Complacency has reached a point where even central banks have begun to worry about it: the idea that markets can only go up – once entrenched, which it is – leads to financial instability because no one is prepared when that theory suddenly snaps.

Even the Fed is frazzled by the absence of frazzles.

By practically guaranteeing with their verbiage and their trillions for the past five years that asset prices would rise forevermore, the Fed made sure that markets have become a one-way bet, that risks are eliminated from the calculus, that everybody is comfortable with that, and that therefore volatility has settled on record lows.

So it’s ironic that New York Fed President William Dudley would suddenly, as he said last week, be “a little bit nervous that people are taking too much comfort in this low-volatility period.” He was worried that these folks would “take more risk than really what’s appropriate.” Others have chimed in. “Low volatility I don’t think is healthy,” explained Dallas Fed President Richard Fisher, concerned about “a little bit too much complacency.”

But all this bullishness, this complacency is only skin deep. Beneath the layer of the largest stocks, volatility has taken over ruthlessly, the market is in turmoil, people are dumping stocks wholesale, and dreams and hopes are drowning in red ink.

The 50 stocks with the largest market capitalization in the Russell 3000 index are up a not too shabby 4.1% so far this year, while the rest of the stocks in the index (51-3000) are on average down 1.1%. But this average papers over a much uglier reality. Charlie Bilello at Pension Partners did the math in an excellent report. The Russell 2000, which covers the smallest 2000 stocks in the Russell 3000, peaked on March 4. Since then, the 50 largest stocks have climbed 3.8%. And the rest? Here is how they fared by market capitalization rank: 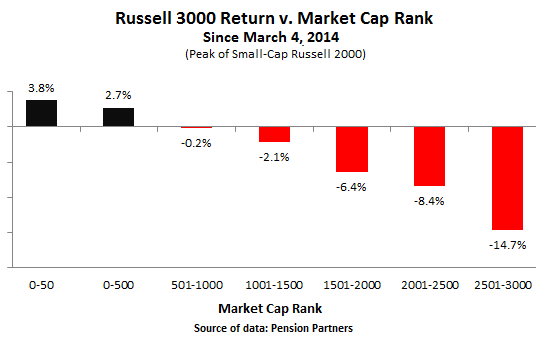 Since March 4, the smallest 500 stocks in the Russell 3000 have plunged 14.7%! The smallest 1000 stocks have dropped 8.4%. But even these averages paper over the bloodletting among individual stocks.

The greatest hype sectors have been hit the most.

“Cloud” computing – which boils down to renting server space and software off premise – was where our revenue-challenged tech heroes, including Cisco and IBM, saw their salvation because it would be the growth area of the future. The smaller companies in that sector are now careening south.

Other stellar performers: social media outfits – including Twitter, down 54% from its high in December – biotech stocks, ad tech stocks…. Oh my.

The Wall-Street hype machine is currently busy explaining that this brutal turmoil and “volatility” beneath the surface, beneath the largest five hundred companies, is just a routine rotation from small caps into the mastodons of the stock market, with the largest 50 stocks benefitting the most. What it is currently not very busy explaining is why the many stocks it had hyped by hook or crook to push them to ridiculous valuations are now getting annihilated. Better not bring it up.

But why worry, with the S&P 500 hitting new highs day after day! Extreme bullishness rules! At least on the surface, and among hard-pressed financial advisors. Meanwhile, the “larger, institutional players are systematically rotating out of illiquid small-cap names and hiding in names with the highest liquidity,” Bilello writes. “They are at the very least anticipating a more difficult market environment to come and likely something more severe.”

So that record-breaking bullishness among financial advisors – people whose job it is to advise regular folks what to do with their life savings – is not shared by the big money, and presumably the smart money. They’re busy battening down the hatches.