It was a very basic question: “Have there been times in the past 12 months when you did not have enough money to buy the food that you or your family needed?” In wealthy countries, the percentage of those answering “yes” should be very small, and given all the money-printing, it should be zero, you’d think.

But when Gallup surveyed families in the 34 member countries of the OECD, the richest countries in the world, it found a reality on the ground that turned out to be an indictment of the Fed, other central banks, their policies, and bailouts in general.

Topping the list of the 10 countries with the highest incidence of families reporting difficulty in buying food over the past 12 months are, as you’d expect, the OECD’s poorest members. Turkey, with the second lowest per-capita GDP in the group, is number one: 50% of the families with children and 40% of the families without children reported difficulties buying food. It’s followed by Hungary, which has been hit by all sorts of economic and currency crises, self-inflicted or not, and multiple recessions over the past few years. So 47% of the families with children and 35% of those without had trouble buying food. Mexico is in third place, with 33% and 30% respectively.

And then come two of the formerly wealthy countries in the Eurozone that were felled by the debt crisis. The solution was to bail out the holders of sovereign bonds and investors in the hopelessly hollowed-out banks. To make that work, incomes, social services, pensions, health care services, and a million other things were slashed, and taxes on the masses were raised, all under direction of the bailout Troika (IMF, ECB, and the EU). Unemployment shot into the sky. And that more and more families would have trouble buying food surprised no one. So number four and five on the list are Greece (28% and 26%) and Portugal (25% and 16%).

You’d also expect Spain to be next in line. It has been wracked by the same problems, and has been prescribed the same medicine, leading to sky-high unemployment, reduced social services, pensions, health care services, etc.

But no. The next country in line isn’t Spain. Nor another Eurozone debt-sinner country, nor some former East-Bloc country, but the country where the central-bank money printing binge since 2008 has been taken to new heights, from which benefited a small number of people enormously, a country whose central bank defined the “wealth effect”: the USA.

In 2013, as the S&P 500 index, including dividends, shot up 32.4% – after an already blistering 16% in 2012 – and as the Fed’s trillions inflated just about every asset class, from modernist paintings to farmland, well just then, 23% of the families with kids and 19% of the families without kids in America reported difficulties buying food.

In Spain, by the way, “only” 18% of the families with kids reported having these basic problems; and Spain didn’t even make the list of the top 10 for families without children.

Starting with 2008, the fate of poor families has gotten worse in most of these 34 countries, though considered the richest in the world. It was the kickoff of the money-printing campaigns and the enormous gifts that the Fed and other central banks handed to banks and to the largest corporations – including such luminaries as GE – and even, more or less indirectly, to individuals such as Warren Buffett to keep them and their financial empires from toppling under their reckless bets. Big investors were bailed out. The poor not so much.

By the time 2013 rolled around, Hungary’s families had seen the worst setbacks: in 2007, 15% had trouble buying food. In 2013, 47% did. A 32-point jump! Turkey was in second place with a 22-point jump, Greece in third place with a 20-point jump. Families in some other countries were hit less hard: the incidence increased 5 points in France, 3 points in Japan (despite the horrific earthquake and tsunami that struck in 2011), and decreased 1 point in Germany.

On average, this is what happened to the difficulties families in the 34 OECD countries faced in buying food once central banks took over running the economy and bailing out the wealthy who owned the largest portion of the assets: 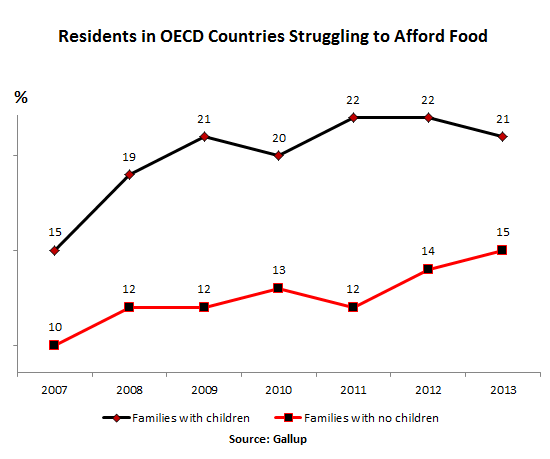 The country with the fourth largest increase over the past seven years? The USA, with a 12-point jump for families with children. The Fed has chosen the winners. It printed nearly $4 trillion and repressed interest rates to near zero, allowing Wall Street to borrow short-term for free to wager this newly created money by buying up all sorts of assets, inflating their prices in the process, and enriching those who own them. And the Fed has designated the losers. This too is the “wealth effect” in all its untarnished glory.