The S&P 500 index keeps bumbling from one all-time high to the next as corporations are issuing record amounts of debt to spend record amounts on buying back their own shares: $160 billion in the first quarter alone, according to CapitalIQ. Borrowing money to buy back shares and hyping it ceaselessly as “returning value to the shareholders” is the most effective way to manipulate up the stock, even if revenues are declining quarter after quarter.

But it’s not even actual earnings as reported under GAAP that is the focus of all attention. It’s an estimate of “forward,” ex-bad-items, adjusted, pro-forma “earnings,” so an entirely fictitious number, helpfully provided by the Wall Street hype machine through its analysts and eagerly disseminated by the media.

That gloriously fictitious 12-month “forward” ex-bad-items, adjusted, pro-forma “earnings” per share then becomes the denominator in the 12-month “forward” P/E ratio, which, according to FactSet, currently stands at 15.4. But just how far off the wall have these fictitious numbers been in the past?

In its latest report, FactSet shed some light on this by comparing analysts’ estimates for earnings growth as of June 1 for Q4 of the same year, for the years 2010, 2011, 2012, and 2013. And it found, without explicitly saying so, that these projections are consistently the biggest hoax out there. 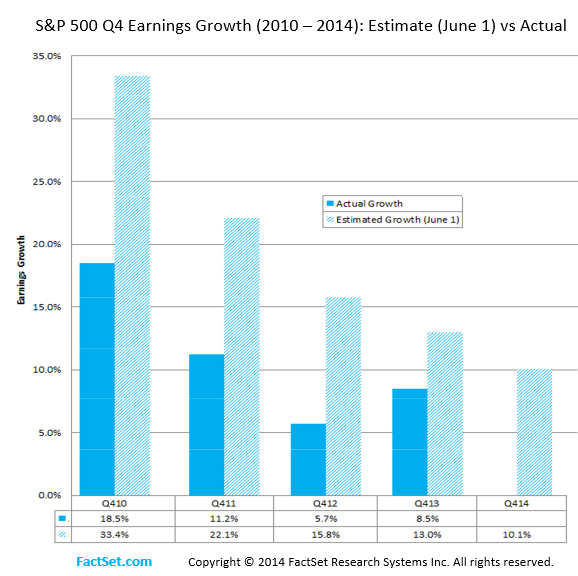 So for Q1 this year, the S&P 500 companies that have reported earnings so far generated an adjusted ex-bad-items pro-forma earnings growth of 2.1%. After inflation, there isn’t much left.

Nevertheless, analysts are currently estimating earnings growth of 10.1% in Q4 this year, a number they pulled out of thin air. But they’ll be busy over the next few months lowering their numbers to something that most of the companies can actually exceed, to give their stocks the momentum needed to rise to the next new high. Meanwhile, these “forward” EPS estimates, like today’s 15.4 for the S&P 500, are bandied about passionately as rationalization for the gravity-defying large caps that make up the index. Beneath the slick surface, momentum stocks and small-cap stocks are already re-experiencing the vertigo-inducing effects of gravity – the game doesn’t work forever.

This acceptance of the idea that the actual past, as accounted for under GAAP with warts, bad breath, and all, doesn’t matter, that only these beautified pro-forma adjusted numbers matter is one of the greatest accomplishments of the Wall-Street hype machine.

But it works – as long as everyone believes that everyone believes that this will drive stocks higher. Many people believing in the same thing generates momentum, which generates even more momentum, and behind it all stands what everyone believes is the guarantee by the Fed to prop up the markets should they begin to ratchet down. And so everyone is trying to get their slice of the “wealth effect” while they still can. It’s a consensual hallucination. The Fed provides the nearly free liquidity and the encouragement. The Wall Street hype machine brings it all together and drives it forward, while profiting from the fees at every step along the way. It works, until it suddenly doesn’t….